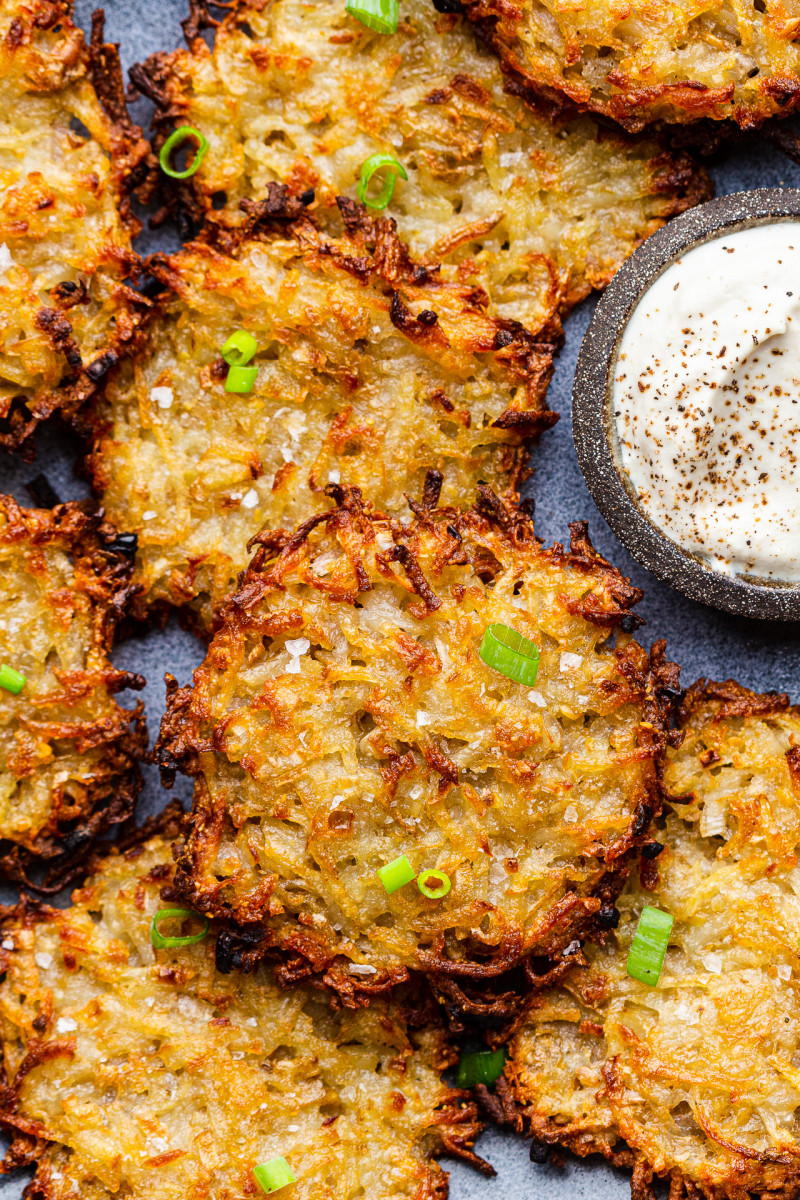 So with Thanksgiving in a rear view mirror, many people in the traditionally Christian part of the world are starting to plan Christmas…I have quite a few exciting festive recipes planned for you, but before I delve into Christmas cooking, I figured I should make something for upcoming Hanukkah, which starts on the 18th of Decemeber this year. Yes, that’s right I made a plate of deliciously crispy on the outside and soft on the inside latkes and the best part is that they are baked, not fried. Are you sold yet?

Even though I am not Jewish, I grew up on latkes – my mum used to make them at least once every two weeks when I was a kid. They are very popular in my native Poland and I think I read somewhere that the word ‘latke’ stems from Polish word ‘łatka‘ meaning a patch. I mean look at them, it makes perfect sense. While it goes without saying that they are delighful fried, I am not massively keen on the process of frying at home and on consuming this much oil so I really wanted to come up with the best baked version so that I (and you) can enjoy their healthier versions now and again. After many many attempts and tweaks and plenty of late night latkes in my stomach (I need to get better at self-control), I am really happy with how theyt turned out and I cannot wait for you to try them.

They are prefectly crispy on the outside – they have what we call in Polish ‘koronka’ (meaning lace) all around them – and soft and substantial in the middle, which was not easy to achieve. I consumed (and composted) many that had crispy edges but were though, chewy and dry in the middle. Another piece of good news is that I use pretty staple ingredients and the process is really quite straightfoward, but please do follow the recipe as there is a reason why I did things the way I did them – I ate pretty many meh latkes so that you can enjoy these pretty perfect baked vegan latkes straight off the bat (I am married to a cricket-obsessed Aussie, you see 😉 ).

STARCHY POTATOES: starchy potatoes (as opposed to waxy or all purpose) are key for crispy latkes. Varieties differ across the world so be sure to find out what is the best variety where you live. In the UK, the most common type of starchy potatoes is Maris Piper (which is what I used) and in the US it’s Russet.

SHALLOT/ONION: finely sliced shallot or onion is added for flavour. You could use onion powder too, but I would add a tablespoon or so liquid back into the mixture to make sure they are not too dry in the middle.

GROUND FLAX: ground flax seeds are used to partially replace eggs, which are typically used to bind latkes together. I add ground up flax straight into the mixture, rather than activate it in liquid first, as this way flax will absorb any excess moisture while activating.

BAKING POWDER: another function of eggs is that they have a leavening effect, I added a touch of baking powder to my mixture to stop the middle from getting too dense.

RICE FLOUR: I used rice flour to give these latkes more of a soft body in the middle and to keep them gluten-free. If you are not gluten-free, plain flour should work just as well. 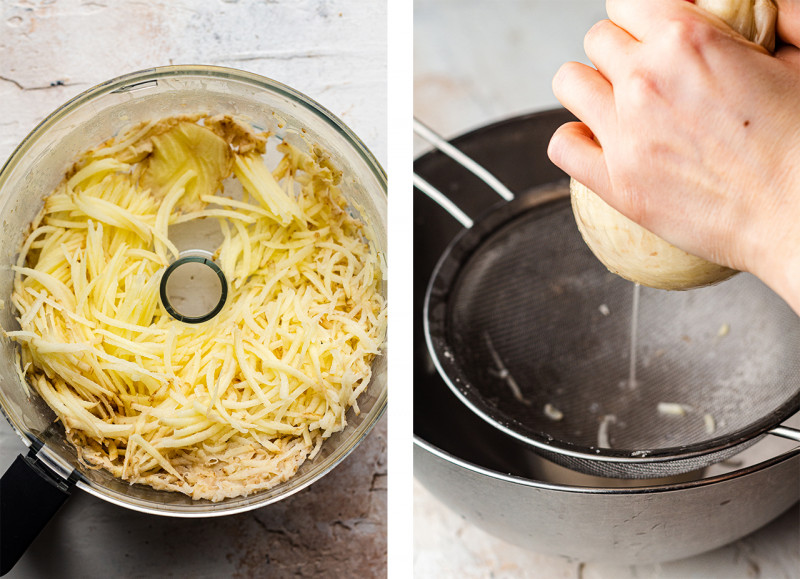 Grate your potatoes coarsely in a food processor or by hand, then place inside a double cheesecloth or nutbag and extract all of the excess liquid out of them. 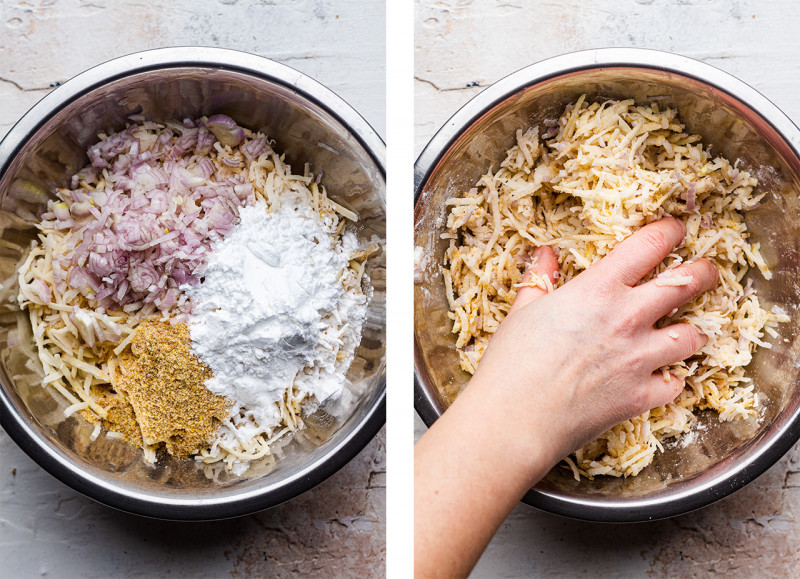 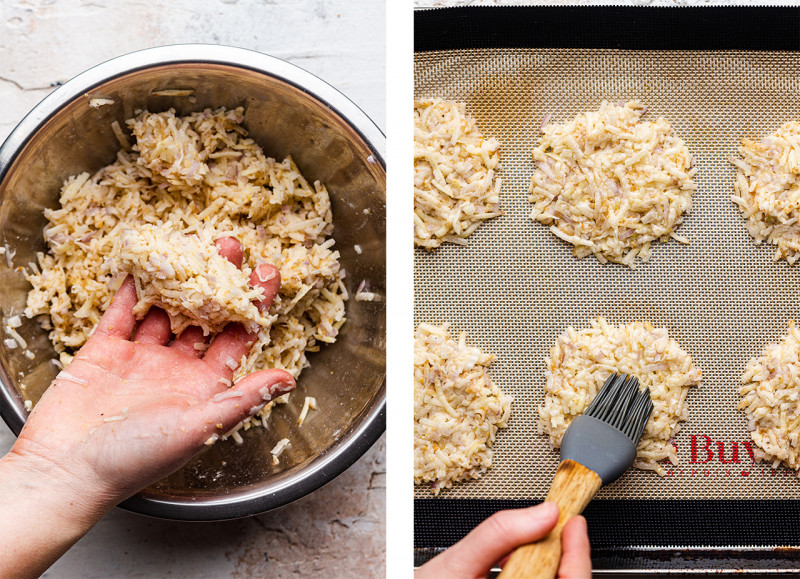 After a few seconds your mixture should be clumpy, use your hands to shape it into patches. Brush with a little oil and pop into the oven. Follow the rest of instructions in the method (below). 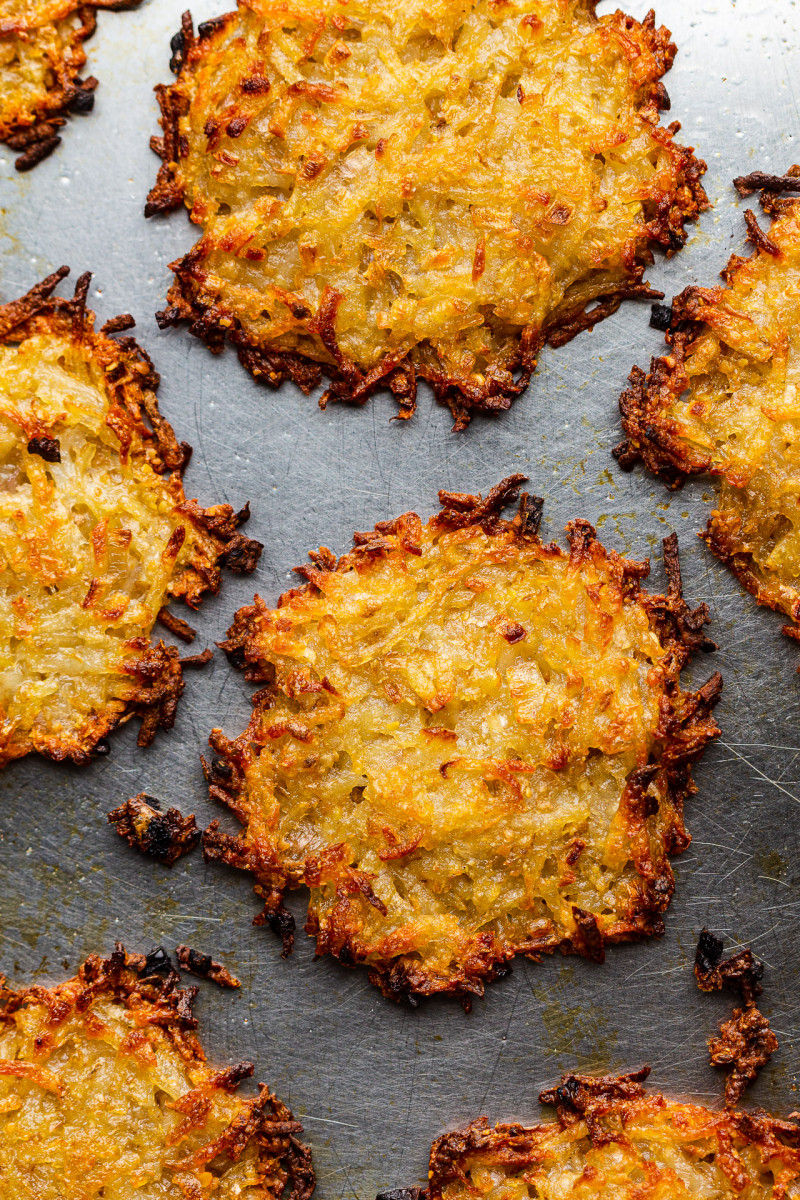 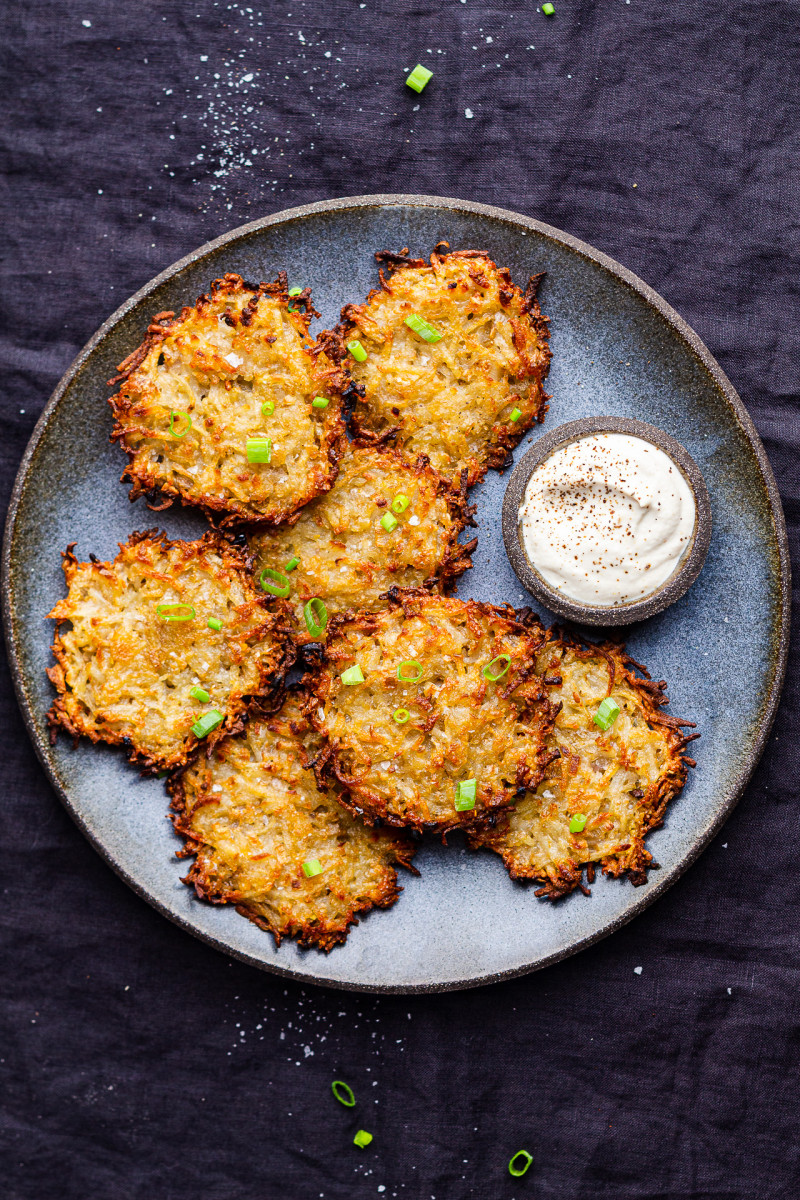 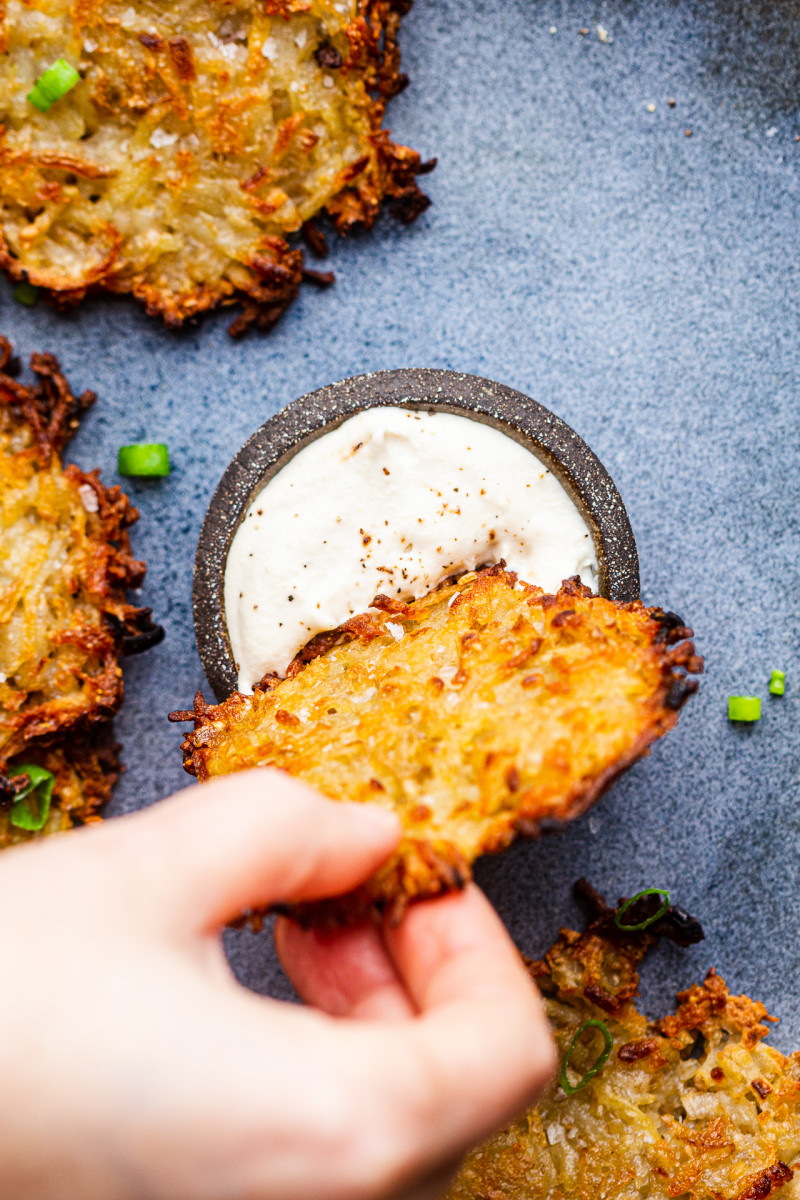 NOTES
*STARCHY POTATOES: starchy potatoes (as opposed to waxy or all purpose) are best for baking as its their starch content that helps them crisp up nicely. Varieties differ across the world so be sure to find out what is the best variety where you live. In the UK, the most common type of starchy potatoes is Maris Piper (which is what I used) and in the US it’s Russet.
SHARE
NUTRITIONAL INFO
calories
79
4%
sugars
1 g
1%
fats
3 g
5%
saturates
0 g
2%
proteins
1 g
3%
carbs
11 g
4%
*per 1 out of 10 latkes (without cream)
YOU MAY ALSO LIKE 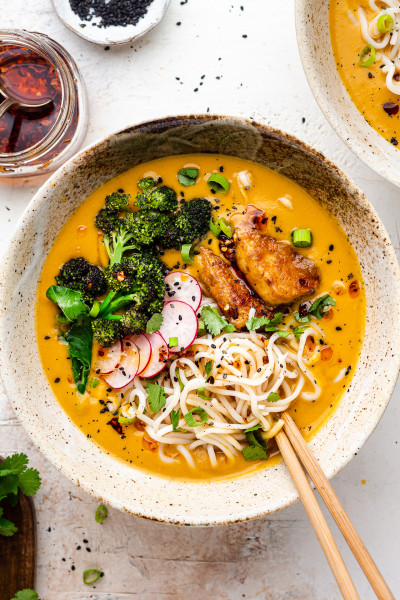 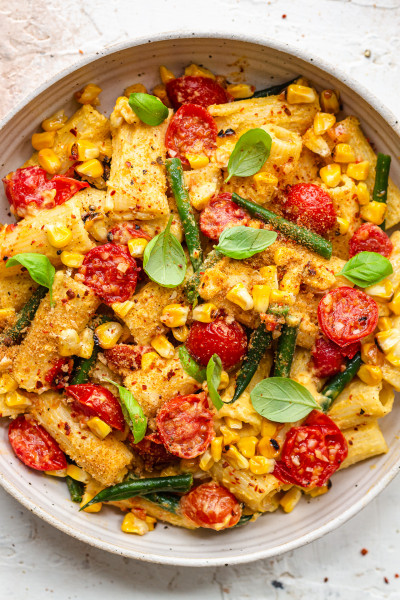 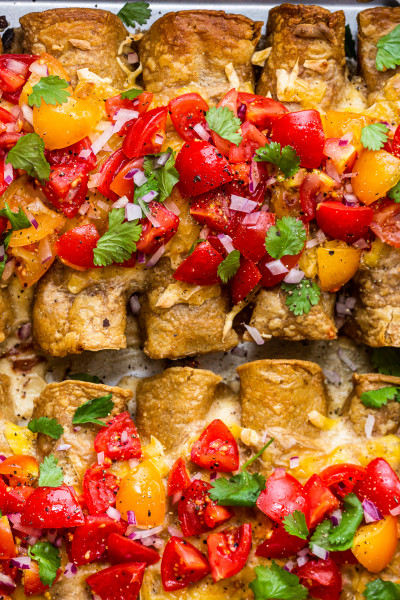 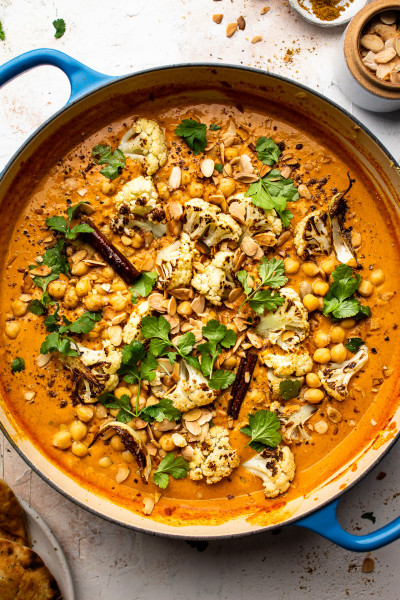 Ania:
REPLY
Thanks Sue, I am delighted to hear that you enjoyed them - this recipe was a challenge to get right. x Ania

Sue:
REPLY
Thanks for working so hard to perfect them!

Ellen:
REPLY
Really fun, easy latke recipe - just don't forget the parchment because potato will stick on metal! I've made this twice and it was delicious both times. Highly recommend! In addition to the cashew sour cream we served them with applesauce and cornichons (but I think any pickly veg would be great.)

Ania:
REPLY
Thank you, Ellen! I am so happy that you enjoyed this recipe! Yes, baking paper is a must for the first 10 minutes - I found out the hard way when I've had to chisel these off the surface of my stainless steel tray during one of my test cooks :) Thanks so much for coming back to review, I so appreciate it. x Ania

Eden Forstbauer:
REPLY
Can I substitute corn starch for arrowroot powder? Would it. work or turn out differently?

Ania:
REPLY
Hi Eden,
Possibly, but I haven't tested with arrowroot so it's possible that some tweaks may be needed. They *should* come out roughly the same though. Ania

Dari:
REPLY
another alternative to sour cream is APPLESAUCE :)
I grew up eating potato pancakes with applesauce AND sugar, corn on the side, YUM
Think these would hold up as a bigger size in the oven?
I opened a jar of applesauce a week ago and need to use it up and wanted to make
potato pancakes but didn't want to fry in oil and saw your recipe
I think I'll try it and see

Ania:
REPLY
Of couse you can have them with whatever you enjoy. I am personally the team sour cream, but I know that other teams exist :) You could make them a bit bigger (you may need to extend the baking time possibly), but this is the only size I tested. Enjoy! x Ania

ROBERTA:
REPLY
ANIA, I GIVE THIS A 5 W/O EVEN MAKING THEM! I COULD SCARF THEM DOWN RIGHT OFF THE SCREEN! I CAN'T WAIT TO TRY THESE. THANKS FOR ALL YOUR WORK TO GIVE US SUCH AN AWESOME RECIPE. ONE QUESTION: AFTER THE FIRST BAKING PERIOD, DO I REPLACE THE PARCHMENT PAPER W/ NEW OR PLACE THE LATKES DIRECTLY ON THE METAL PAN? YOUR PUMPKIN CHEESECAKE I MADE IN ONE DISH W/O CRUST - VERY DELICIOUS. I ALSO MADE THE TIRAMISU "WHIPPED CREAM" INTO A FROSTING FOR A PUMPKIN SPICE CAKE BY USING COCONUT SUGAR - ALSO VERY DELISH. THANKS, AGAIN, FOR ALL YOUR INSPIRATION & INSPIRED RECIPES. I HOPE YOU 3 HAVE A MAGNIFICENT HOLIDAY SEASON. MANY BLESSINGS, ROBERTA

Ania:
REPLY
Aw thank you for your kind words, Roberta! I remove baking paper completely because after 10 minutes they no longer stick to the tray (which is why I use baking paper to begin with) and they get crispier when put directly on the metal tray due to metal on its own conducting heat better. Hope this makes sense. Thank you and lovely holiday period to you and your kitties also. x Ania

Sue:
REPLY
These look delicious! I’ll have to give them a try. Thanks Ania

Deb:
REPLY
Can you make these ahead and reheat?

Ania:
REPLY
Hi Deb,
I have had some reheated just now and they get dry, I would not recommend making these in advance. Ania