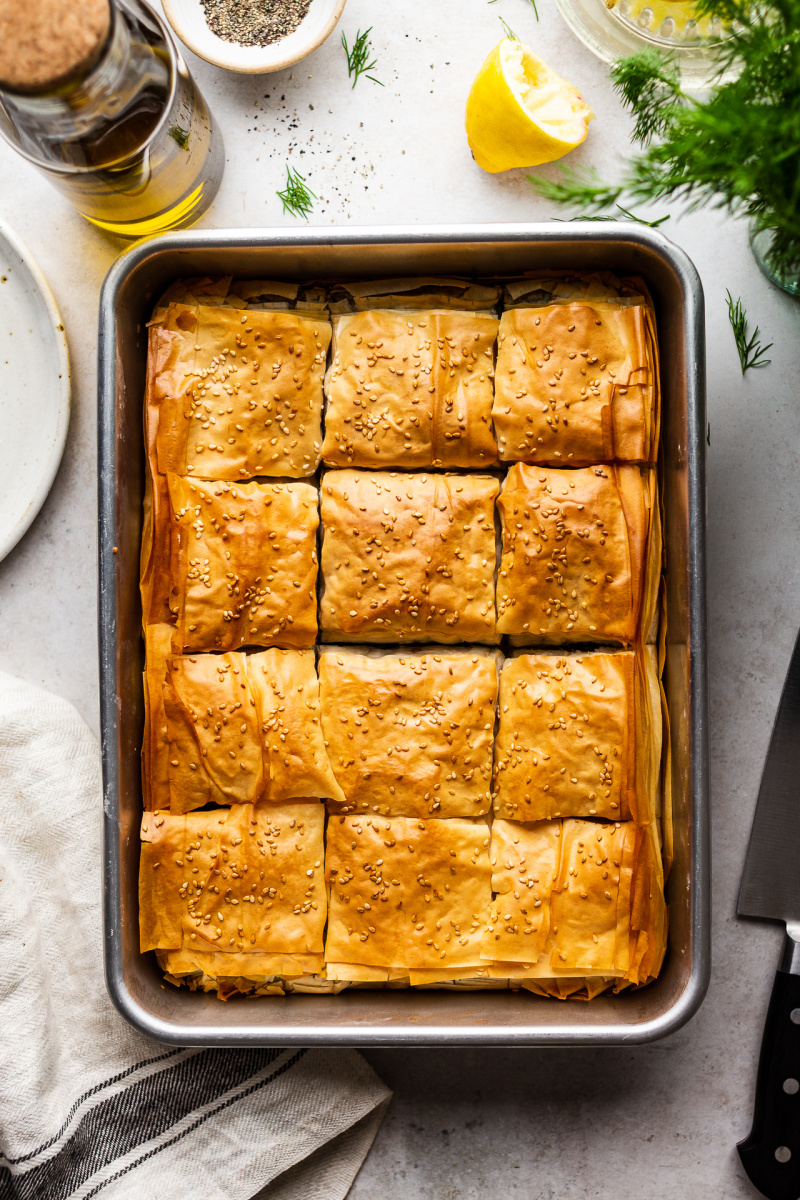 For fellow UK-dwellers, happy bank holiday weekend! Judging by how busy it was out yesterday and how unusually empty of cars our street is, lots of people have gone away for the weekend. We’ve decided to beat the crowds and we aren’t hitting the road until after the weekend. We’ve planned a small break on the Pembrokeshire coast during the week so we are both checking the weather forecast like hawks.

As long weekends are conducive to family gatherings, especially after the year we have had, I thought that a tray of a Greek-inspired (I miss Greece!) crowd pleaser that’s easy to make would make a good recipe today. As you probably know, I am no stranger to Greek cuisine on account of having lived there for four years and so I have made a spanakopita recipe before and while I still stand by that recipe, it is a little more time consuming to make due to its coiled shape and my almond feta cheese, which while delicious, it is a little more involved. It is time, I thought, for a simpler recipe that anyone can pull off without feeling intimidated.

The most time consuming bit about any, not just vegan, spanakopita recipe is the spinach prep. It needs to be precooked and then all of the moisture needs to be squeezed out of it as otherwise all that moisture will steam up in your pie during baking, making it soggy. It doesn’t take that long though, especially if you can task someone with strong hands to do all the squeezing for you while you prep the rest. I mean, I am fairly sure you won’t be eating this amount of pie alone, so you should not have to be making it alone either. You can employ an old kitchen towel to squeeze the moisture out, but the least messy way is to simply squeeze the spinach out by the handful and go over it all at least twice.

Other than the spinach prep, layering the pastry in the tin is a breeze. You simply need to be gentle with it, but it is absolutely fine if there are any tears (use these sheets in the middle of the pie) and the pastry layers do not have to sit perfectly flat against each other – in fact, some unevenness and creases encourage air pockets forming between layers and leads to a flakier end result, so a little messiness is a good thing.

The creamy element of spanakopita is usually made of a combination of a few different cheeses and sometimes yoghurt or cream cheese is added for extra creaminess. I aimed to match the consistency and flavour profile of that element by making a creamy cheese-like component with soaked cashews (flaked almonds, sunflower seeds or tofu would work also!) flavoured with lemon, salt, garlic and nutritional yeast. It comes together in seconds in a food processor or blender and gets directly added to the spinach and sautéed aromatics.

Another hallmark of a good spanakopita is building an impressive stack of layers on top of the filling, so even though it may be tempting, do not scrimp on the amount of pastry or oil. I used up nearly two packets of it in an effort to get that crispy golden canopy of pastry and it turned out beautifully. I hope you’ll make it and enjoy the end product as much as we have. 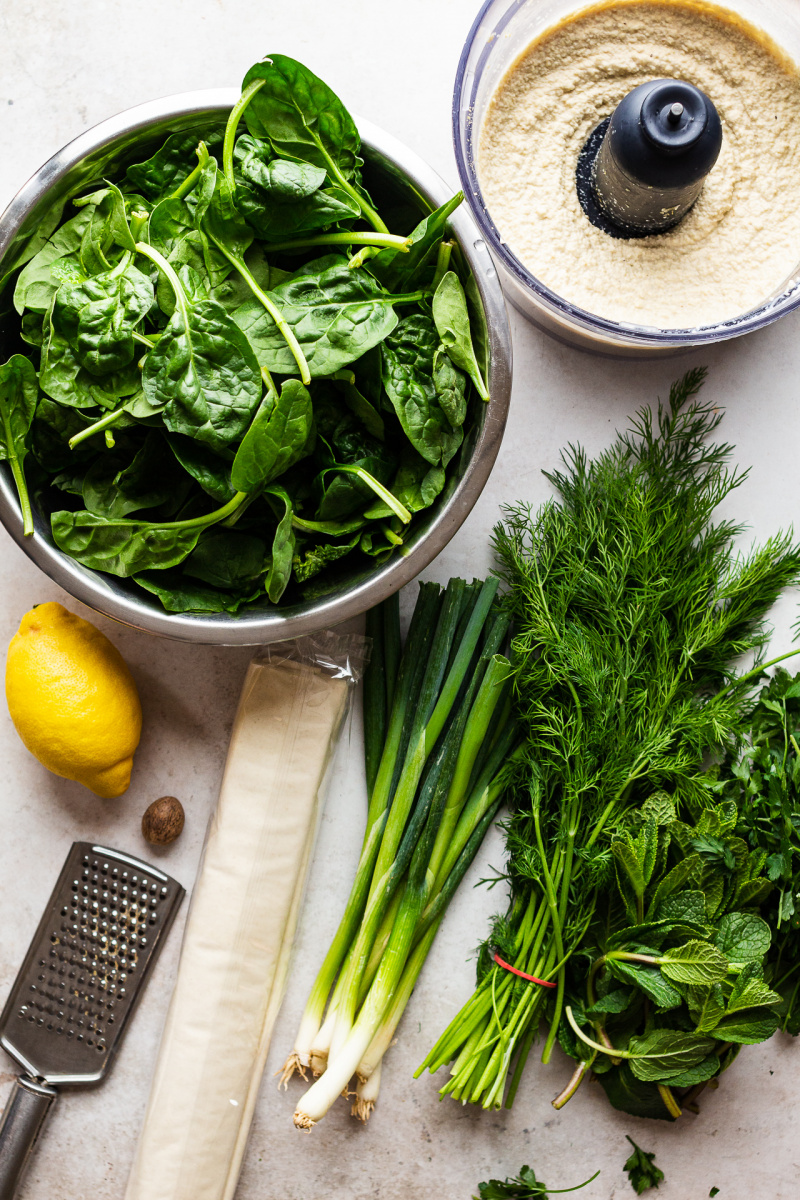 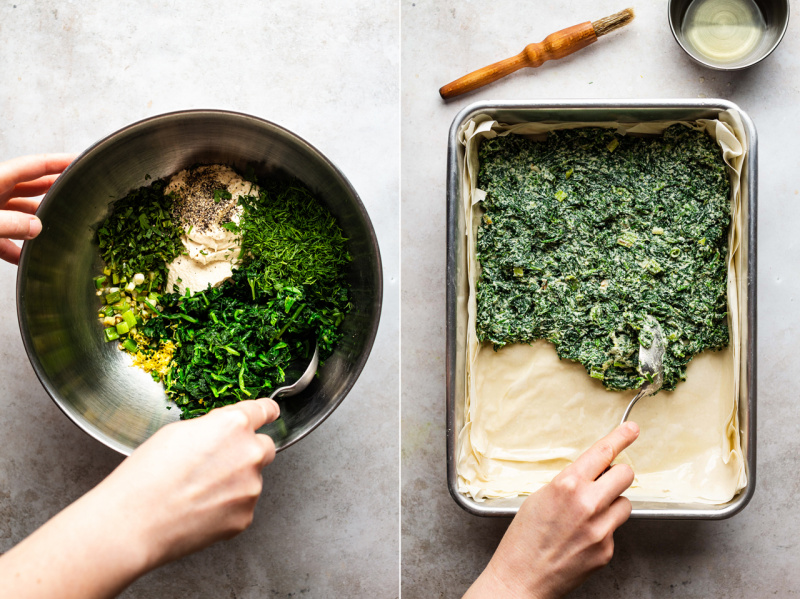 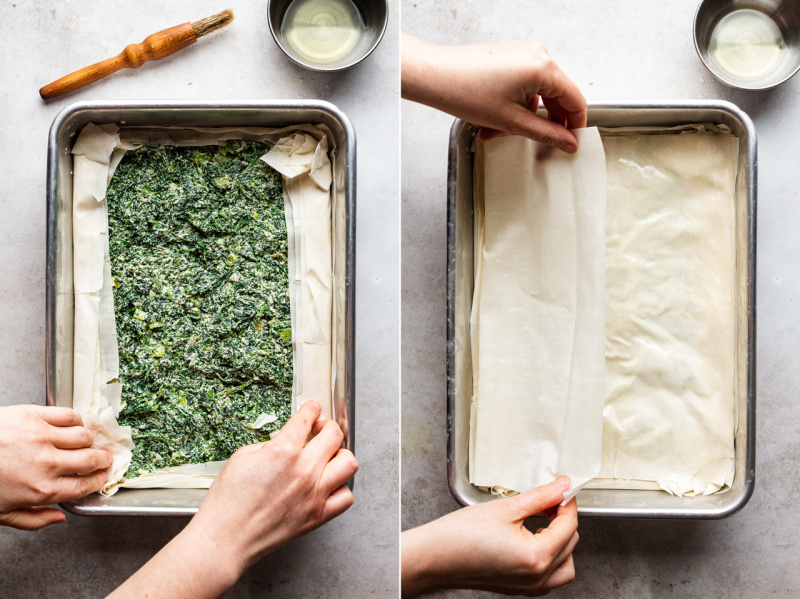 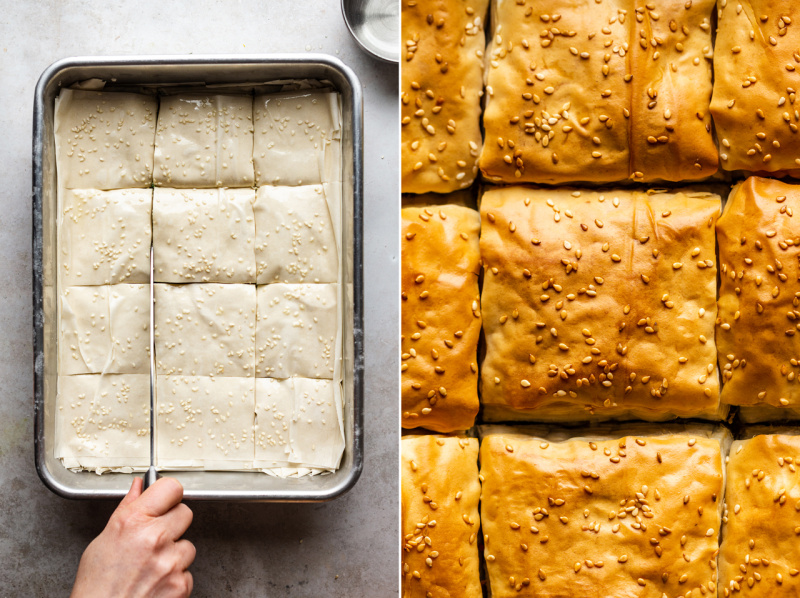 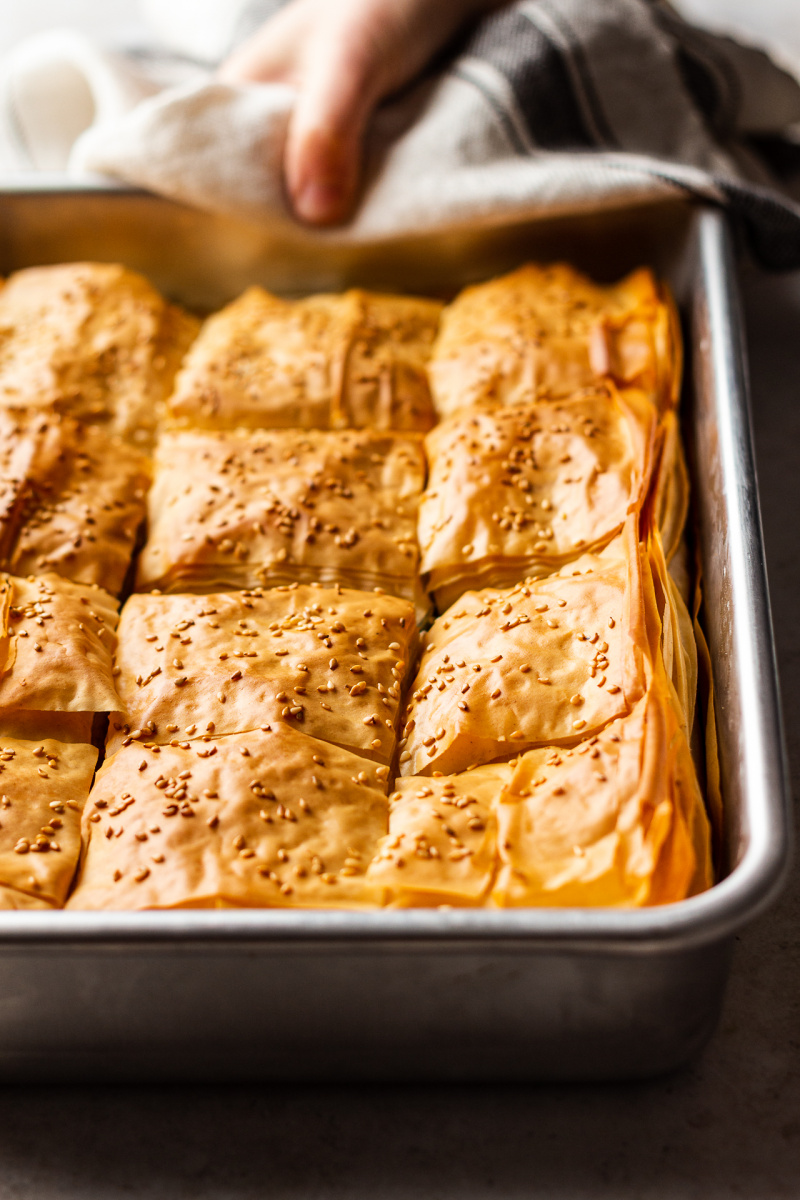 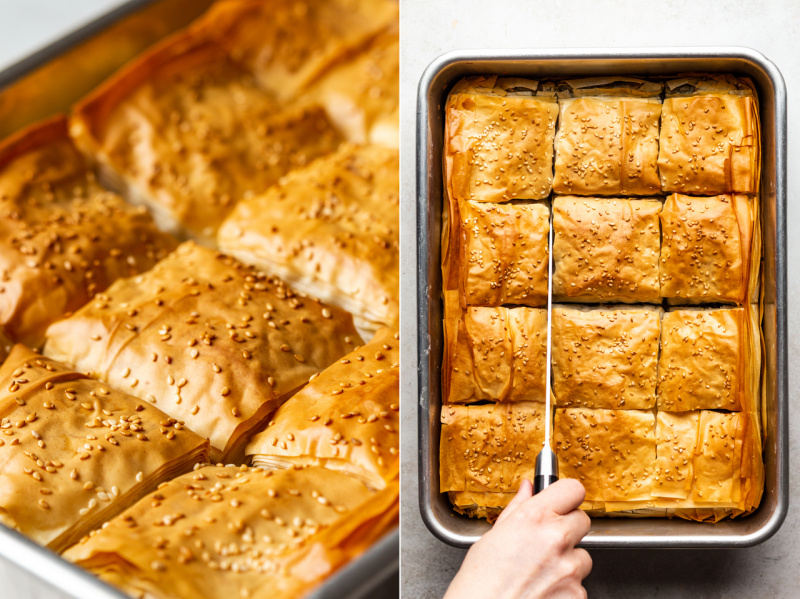 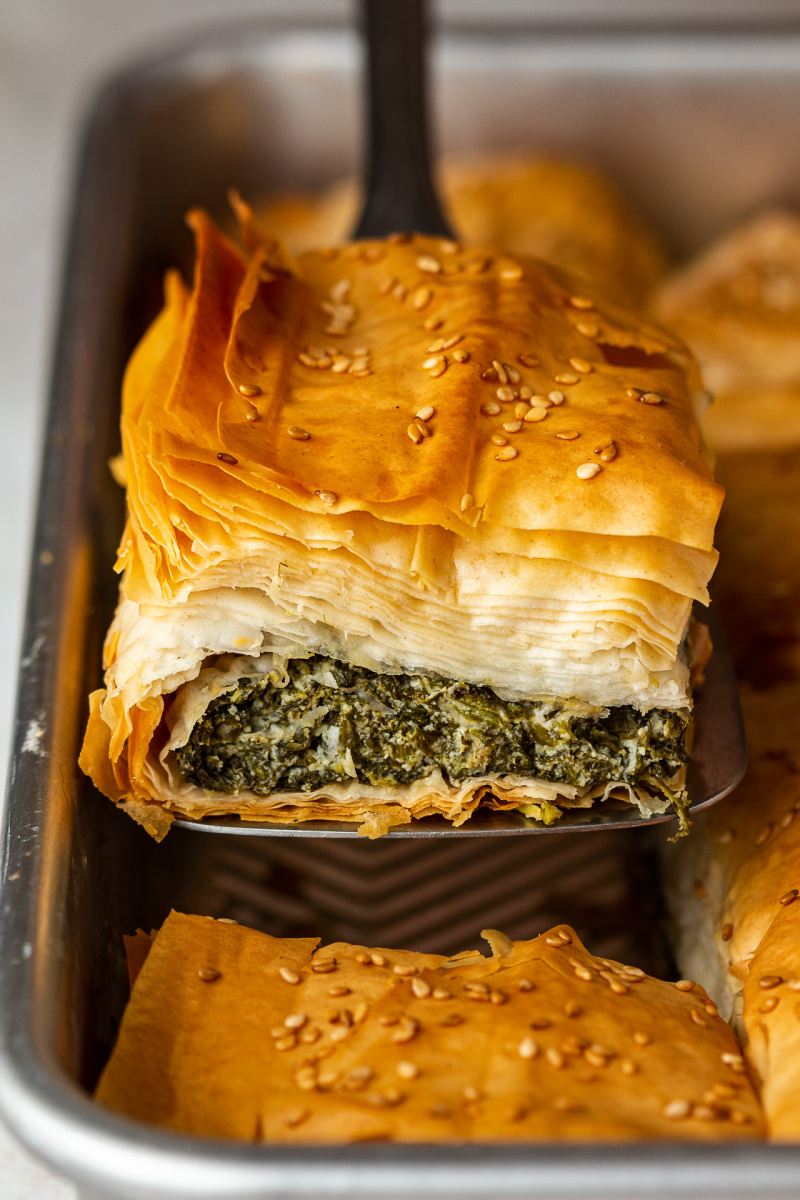 NOTES
*Or at least for 1 hr in boiling water.

I find that shop bought phyllo / filo can be a little bland so sprinkling a little salt between sheets while brushing with oil is a good idea. 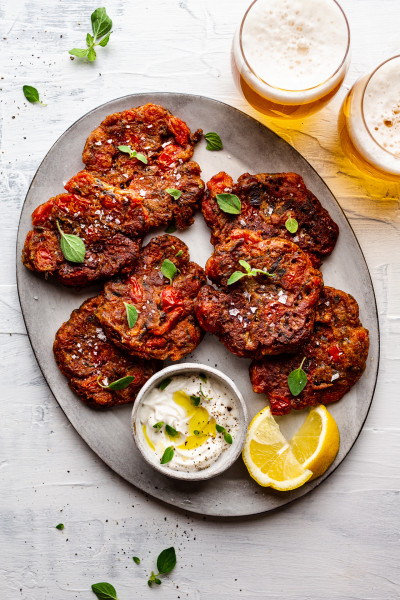 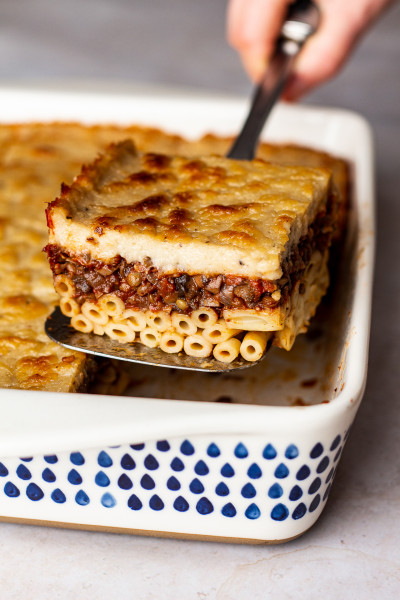 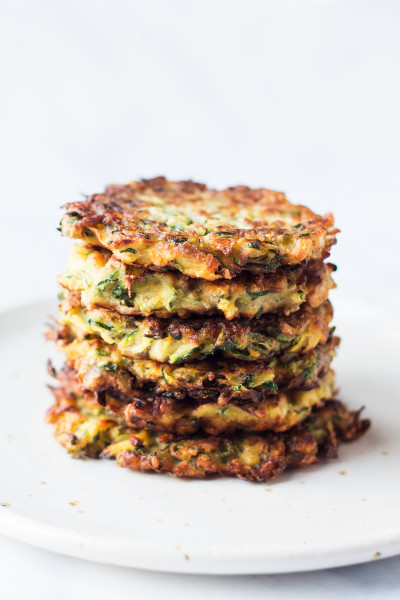 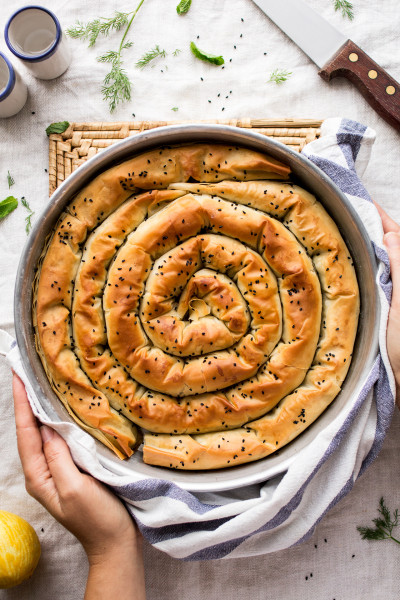 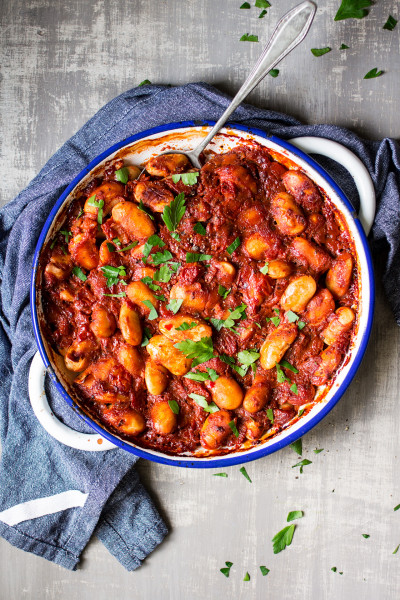 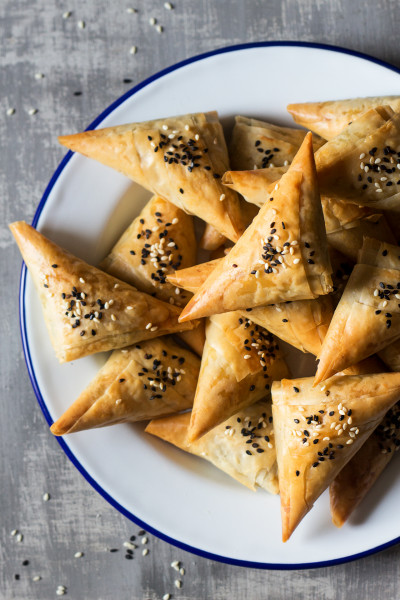 5.0
7 reviews, 21 comments
REVIEWS & QUESTIONS
Hasha Samarasekera:
REPLY
Hi Ania and Duncan,
I tried making this recipe for Mother’s Day today as I am aspiring to transition to a vegan diet (so far I am a flexitarian, meaning that I am mostly vegetarian unless I couldn’t find any vegetarian or vegan options). I baked it for 37 minutes and I was so pleased to see the pastry turning almost completely golden brown by the thirtieth minute. The taste was also very delicious as I could feel the spinach taste in my mouth. I hope that the both of you will continue this awesome blog, and I am especially looking forward to you veganising more non-vegan dishes (including feta cheese and crab meat)!
Thank you (Efcharisto)!

Ania:
REPLY
Thank you, Hasha! I'm delighted to hear that you enjoyed my dairy-free take on spanakopita! I already have done one feta recipe, but I might attempt more, for sure. Thanks for taking the time to review, I really appreciate it! x Ania

Ali:
REPLY
Delicious. I swapped out some of the green onions for leeks I had in the fridge and doubled the garlic as I usually do, but excellent recipe. Will make again! And again and again… Thank you!

Ania:
REPLY
I'm delighted to hear that you enjoyed it, Ali! And thank you for taking the time to review, I really appreciate it. x Ania
Fotini:
REPLY
Hi,
Can you tell me which brand of vegan phyllo you used?

Ania:
REPLY
Hi Fotini,
I used Theos brand phyllo that is available in Tesco in the UK. Hope this helps! Ania

Nora:
REPLY
Hi :) This recipe looks soo good. I was wondering if I can freeze my leftovers and if so, what kind of reheating method would you recommend (microwave or oven)?

Ania:
REPLY
Thanks Nora! I would say thaw naturally and reheat in a 180-200° C oven for about 25-30 minutes (cover the top initially, remove the covering for the last 5-10 minutes). I don't even own a microwave so I cannot give you any advice on that option, I am afraid. x Ania

Helen Downing:
REPLY
Thank you so much for this recipe! I used to make standard veggie spanakopita a lot for family celebrations, but since going vegan 8 years ago I haven't been able to find a good vegan recipe for it (although I have found some really dodgy ones!). Your recipe turned out brilliantly, for a late Christmas family celebration. My son who's an omnivorous chef even said he preferred it to my old feta-based version!

Ania:
REPLY
Hi Helen,
I'm delighted to hear that, especially that Greek cuisine is so close to my own heart so I want to do it justice. Thank you so much for returning to write this review, I really appreciate it. x Ania

Alex:
REPLY
It’s takes some time to make but was so worth it! Everyone at the table, vegan and non-vegan, loved it! Thank you Ania 😊💛✨

Ania:
REPLY
Thanks Alex, I am so happy to hear that it was a success with you and your diners, including non-vegan ones! And thanks so much for returning to review - I really appreciate it! x Ania

Emma:
REPLY
This was delicious! It kept really well in the fridge too. As good as, if not better than, any dairy-filled version I've tried in the past. I can imagine the filling making a really good open tart as well, with some tweaks to the proportions, and maybe some pine nuts sprinkled over.

Ania:
REPLY
Thank you so much for your kind words, Emma! I'm so happy to hear that you rated it so highly! That's so nice to know! Ania

Anne Powell:
REPLY
Had this for dinner tonight and it was loved by all! Thanks for the recipe.

Ania:
REPLY
Thanks Anne, I'm delighted to hear that. And thank you so much for coming back to leave to review - I really appreciate it. x Ania

Danielle Aronson:
REPLY
You're absolutely right... the method was easy, just time-consuming. Worth it, though!

Danielle Aronson:
REPLY
Delicious!!! But I would not label it as easy. Ended up being three different sessions of prep work. Was thrilled with the result anyhow! It even tempted me to taste-test comparison to "real" spanakopita with my 10% non-plant-based ration for the week, and I was still impressed. I made the mistake of tasting the cashew filling out of the blender and almost quit right then. Thankfully, something magical happened after step 2. Fair warning to others--ignore the temptation and power through.

Ania:
REPLY
Hi Danielle,
Glad you enjoyed this dish and trusted me when it comes to the cashew filling. Well, it is relatively easy to put together (doesn't require intricate pastry work like this coiled version or making the 'cheese' component in advance, culturing it etc.), but it still is a spankopita after all and you cannot escape the fact that it's the type of dish that requires a fair amount of prep, even the non-vegan version. Ania

evelyn lee:
REPLY
Isn't filo chock full of butter? ? If you have a god vegan brand, can you please post what it is?

Ania:
REPLY
If you buy butter phyllo sure, but a lot of commercially available phyllo is accidentally vegan (it's a production cost saving measure). Not sure where you are based but in the UK, jus roll has a vegan phyllo, for example. Ania

Ramya:
REPLY
will be making this soon i never had spanakopita and greek food before perfect for my after office meals will dm you if i make this and let you know how it goes Thanks Ramya

Ania:
REPLY
Great to hear, let me know if you enjoyed it! Ania

Liz Mackay:
REPLY
Dear Anna - I live on the West Coast of Canada, and we have some really good frozen chopped spinach available here, which would reduce the work a bit ... obviously it would need to be squeezed well just like the fresh spinach ... would this be a viable alternative?
LOVE your blog and recipes!! I was born in, and grew up in Chester , Cheshire till I emigrated to Canada just before my 24th birthday, and almost 53 years ago!

Ania:
REPLY
Hi Liz,
Yes, absolutely, frozen spinach (defrosted and squeezed out well) will work just fine. Thank you for your kind words about my work, it's lovely to hear. I've heard of Chester, but have not been there yet. West Coast of Canada sounds like a brilliant place to put down roots, my husband is very jealous as living in Canada in amongst wilderness is certainly something he fantasies about ;) . x Ania

Annie:
REPLY
This looks so good! How would you go about using tofu instead of cashews? Unfortunately I’m allergic to cashews so I’m always looking for an alternative.

Ania:
REPLY
Hi Annie,
I would use firm cotton (as opposed to silken) tofu and blend it with lemon juice, olive oil, garlic, salt and nutritional yeast and a touch (if needed) of water if you feel that it is needed. You may need a bit more tofu than cashews, I think - in total you want just over a cup of the mixture by the time you are done. Hope this helps! Ania