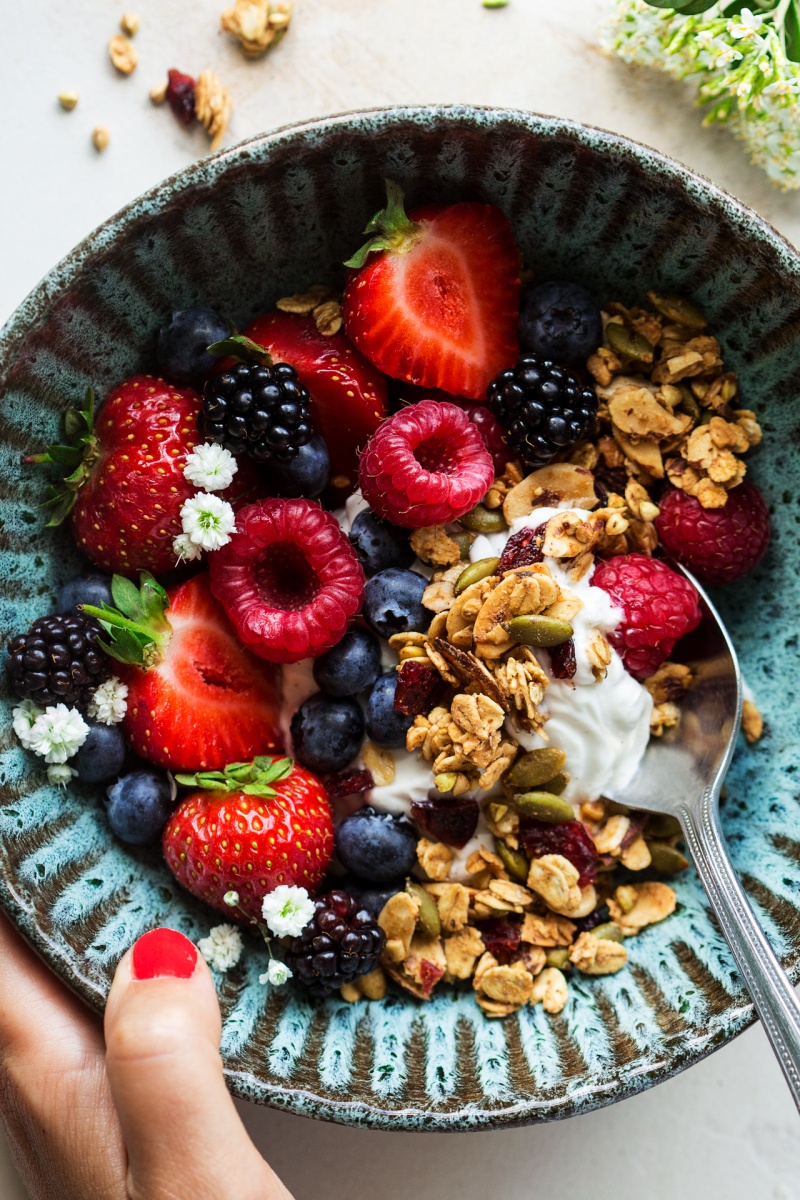 Good weekend, y’all? We’ve had a really good, relaxing weekend spent outside in the glorious weather enjoying the company of good friends, good food and insane amounts of iced coffee. We even managed to put up my hammock in the garden yesterday, which took a while as we both seemed to have forgotten our knots and the first attempt to sink into it ended up with me on the floor…

Now that we have finally got married, we decided it’s time to get serious about finding our first home, as we are a bit sick of renting and feel the need to have a space we can call and make ours at last. We’ve been looking for months now (although not very intensely) and it wasn’t until yesterday that we spotted a house that seemed to tick all our boxes and did not require any major, structural work, which we don’t feel like taking on right now. Unfortunately, I have just found that the house is under offer, which I am gutted about as it had an amazing open plan kitchen with a huge entertaining area and I could so imagine myself bringing creative havoc to it 😉 . Oh well, we have another hopeful viewing tomorrow, fingers crossed.

Today’s recipe is a simple and delicious (yet considerably healthier) take on granola. I don’t tend to have granola for breakfast, but I often use it (alongside coconut yogurt) to top delicious summer berries with. It makes for a healthier summer dessert and leaves me satisfied, yet without any regrets about overindulgence.

Having said that, I find these crunchy, nutty clusters so addictive that I don’t even need anything to put my granola on. I simply eat it straight from the jar by the handful, so that’s possibly why I felt the need to make it a bit healthier, ha ha. Busted!!

Typically granola relies on fat (usually oil) and sugar (maple syrup or honey are often used) to give the cereals, nuts and seeds a delicate coating of sweetness and a satisfying crunch. Old-fashioned recipes often include egg whites instead of oil, which is what gave me the idea to use aquafaba in the first place.

First off, I used a combination of maple syrup and aquafaba (chickpea brine), the chemical properties of the aquafaba resembling egg whites. This simple combo renders the granola golden and crunchy and way healthier than standard alternatives.

Then, I made another version where I replaced half of the aquafaba with almond butter (peanut butter or tahini would work beautifully too) for a slightly more indulgent take on this good guy. I personally like that version the most as it has a beautifully nutty taste and uses nutrient rich nut butter instead of nutritionally void oil. I hope you decide to try them and if you do, I am curious to know which version was your favourite? 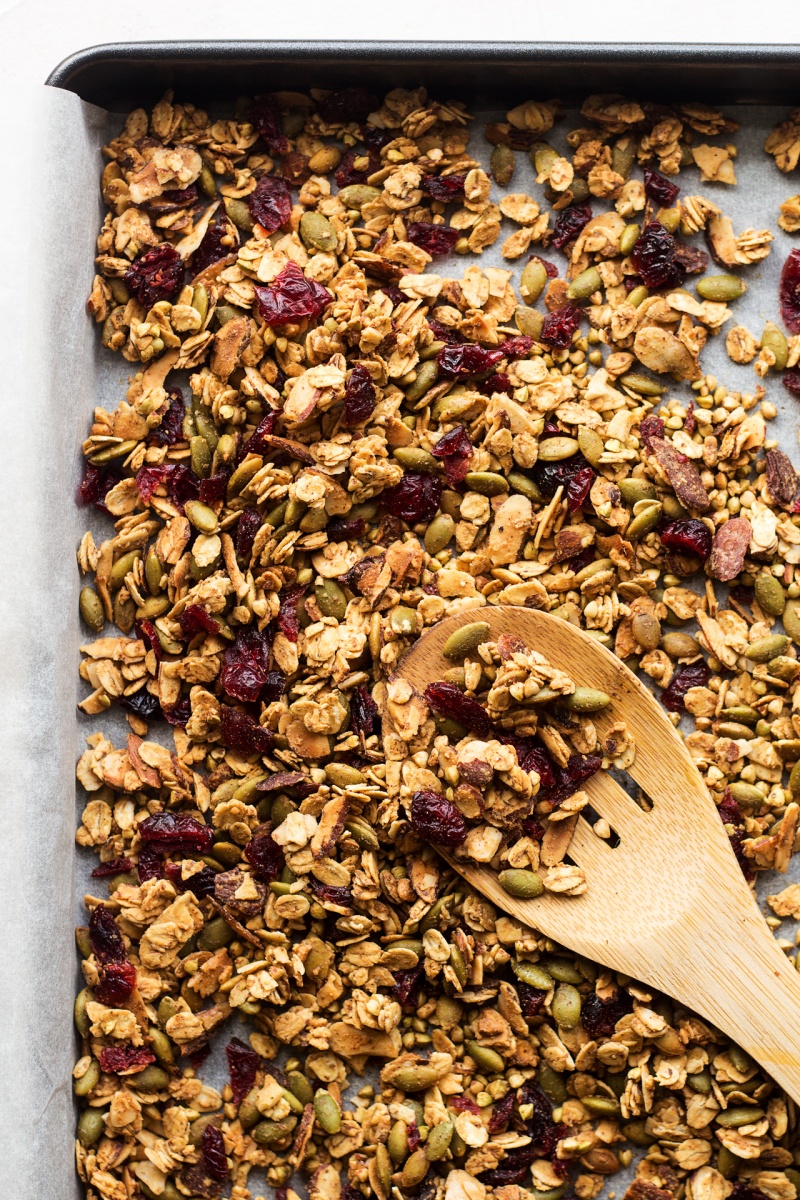 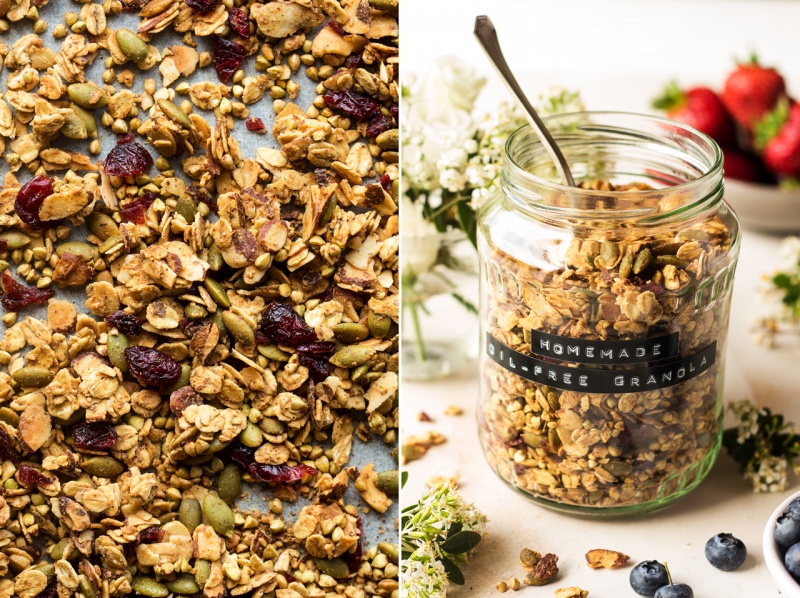 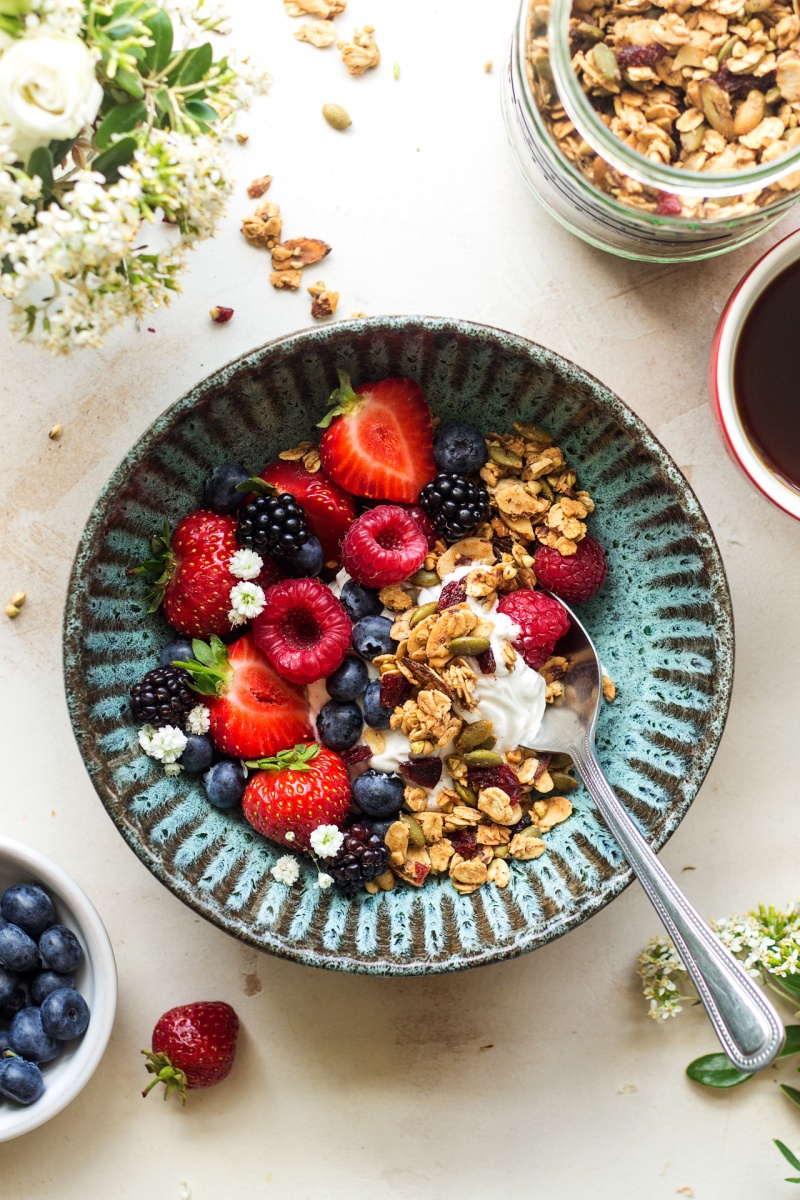 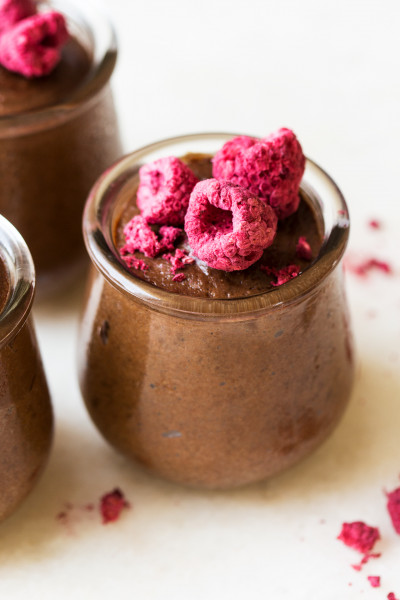 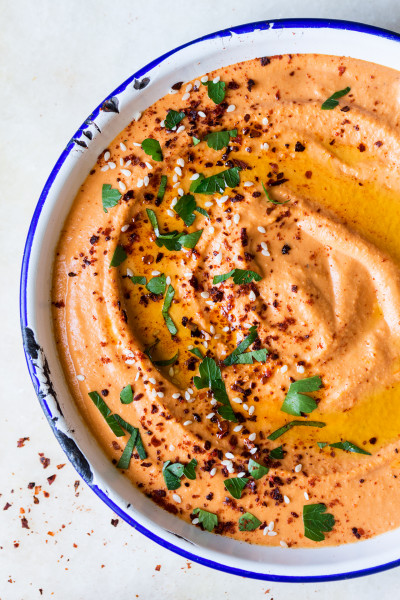 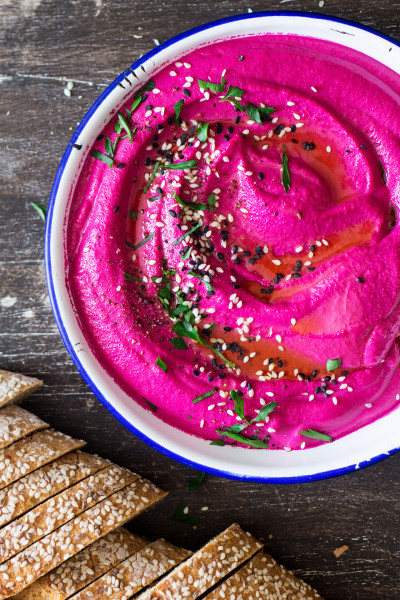 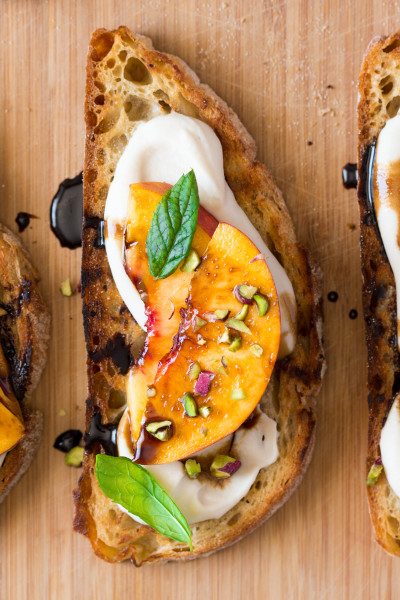 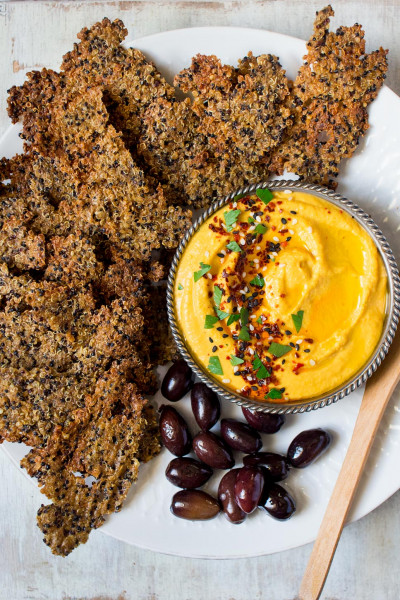 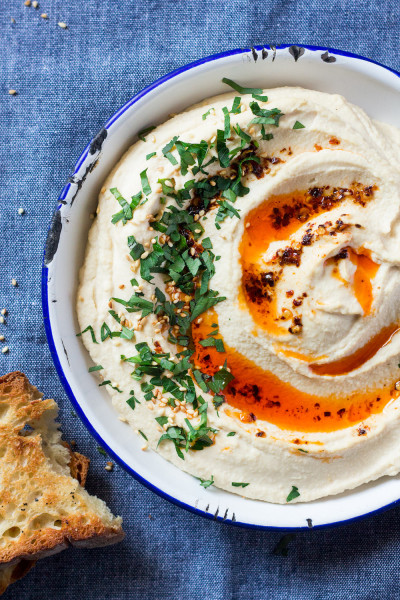 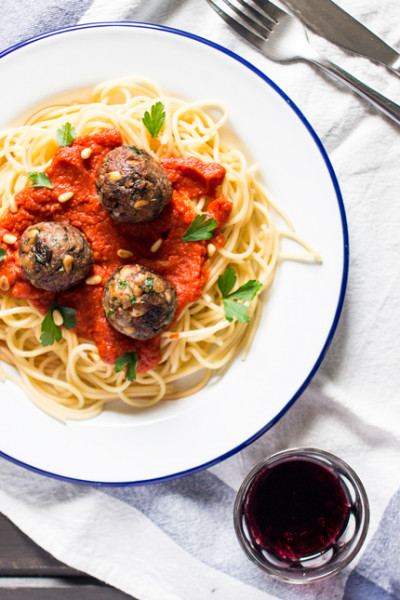 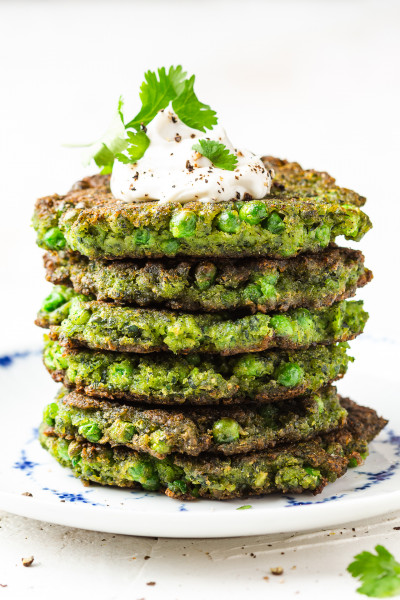 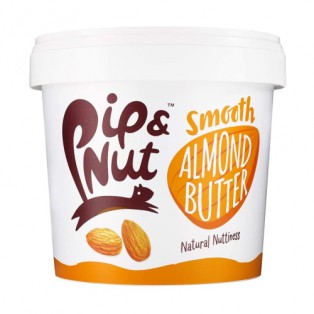 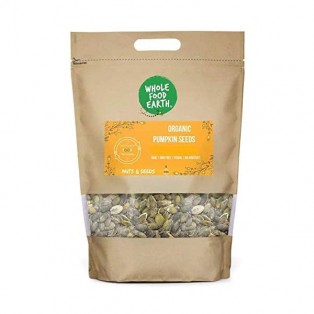 5.0
1 review, 13 comments
REVIEWS & QUESTIONS
Rita:
REPLY
Also, and sorry if I'm being annoying, do you think that I could fit sweet potato somewhere in this recipe? I was thinking maybe adding less maple syrup and nut butter and replacing with pureed sweet potato, but I'm not sure...

Ania:
REPLY
Hi Rita,
Yes, of course, you could try that, but as I haven't tried it myself I cannot help you here. It will certainly add moisture to the recipe and therefore make granola less crispy. Hope that helps! Ania

Rita:
REPLY
Could I replace the cranberries with dates or dried figs? Those are the only dried fruits I enjoy 😅😅

Rita:
REPLY
Hey Ania,
I was wondering if I could replace the cranberries and pumpkin seeds with anything else, since I don't like them a lot. Love your recipes by the way! xx

Ania:
REPLY
Hi Rita,
Sure you can! Swap cranberries out for raisins, chopped appricots or maybe dried apple cubes and pumpkin seeds for any other seeds or nuts that you do like. Aw, thanks - that's lovely to hear. x Ania

Emma:
REPLY
Do you have a suggestion for a maple syrup replacement? How about dates? Would that work?

Ania:
REPLY
Hi Emma,
You could use a different liquid sweetener (agave syrup, date syrup etc.), date puree might work but I am pretty sure it will give you less crispy texture. It's certainly worth a try! Ania

Georgina:
REPLY
Hi! Do you need to beat the aquafaba till there's soft peaks?

Ania:
REPLY
Hi,
There is no need to beat it at all, just add as is. Ania

Sally:
REPLY
Could you make an offer as well on the house? Preferably a bit higher ☺️Good luck

Ania:
REPLY
Thanks, Sally. No, we cannot the bidding is closed, plus we could not strech our budget any more. Wasn't meant to be, I think! Ania

Jennifer Laing:
REPLY
Is there a way to make this without aquafaba?

Ania:
REPLY
Hi Jennifer,
I have only just tried those two versions I included in the recipe, but I am very confident that using 4 tbsp of nut butter mixed in with 4 tbsp of maple syrup will also work well. You could also try using flax or chia egg instead of aquafaba. Hope that helps! Ania