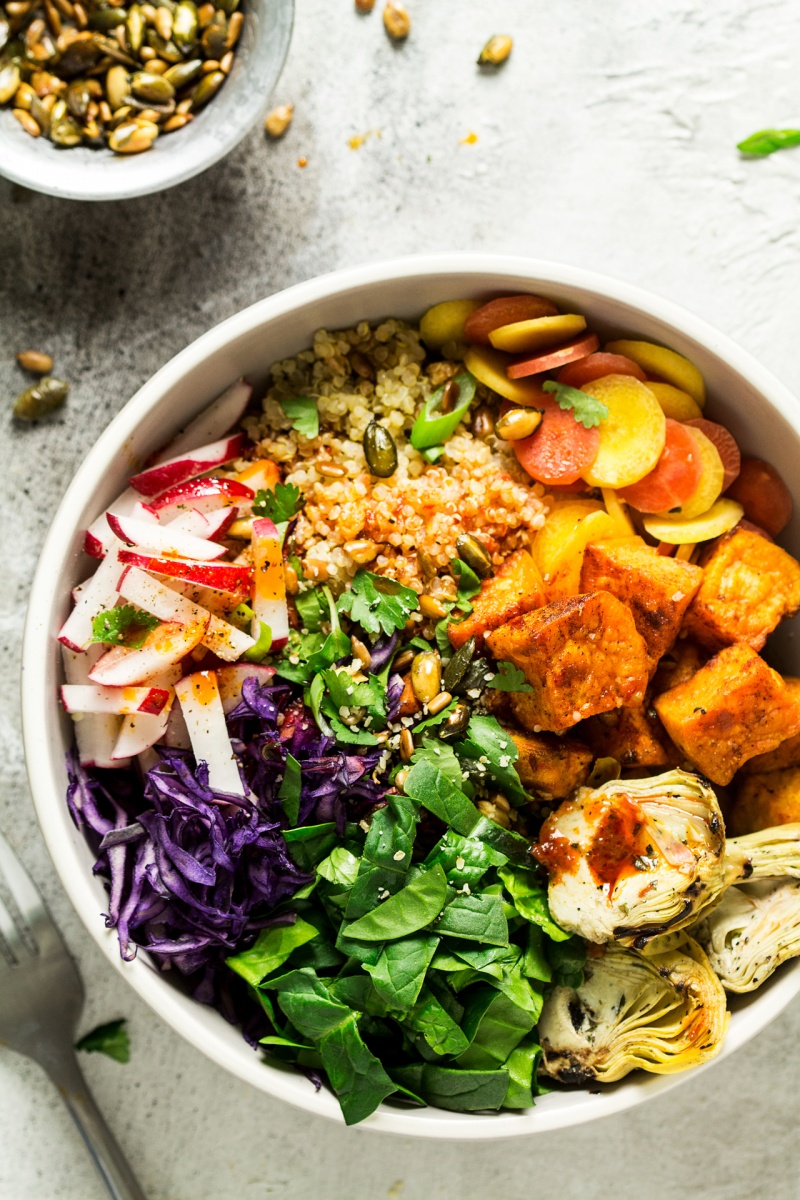 Well, I was supposed to have this post ready by the end of yesterday, but I couldn’t quite get my stuff together. I was doing everything but work yesterday…You know my good old friend – procrastination? As I am my own boss, I’ve decided not to stress about it and to award myself a little day off – I am working on being a bit kinder to myself 🙂 . It worked out well as I was in a much more productive frame of mind today, despite a few calamities happening.

As soon as I set up my photo shoot, a water meter engineer turned up claiming I had an appointment for some work they needed to do at the house. I was convinced that it wasn’t supposed to be until tomorrow, but I remembered wrong.

First I had to help him search for a water shutoff valve, which wasn’t under the sink as we both expected. He had to use a machine with a very high-pitched noise to be able to detect the presence of a water pipe leading into the house. As you can imagine, Tina did not like that very much. She disappeared and I could not find her for a very long time despite all the usual tricks that normally work a treat.

I started getting worried even though I knew there was no logical explanation other than that she must be hiding somewhere. I started to imagine that she got abducted by the water engineer for ransom, ha ha until he showed me a photo of under the bathtub with two little eyes shining in the darkness, phew…She might have fallen asleep there, but she did not come out again for another hour, poor thing.

This is the second time she has had the living daylights scared out of her. Last week, the house had a new gas and electricity meter installed and during the installation, the house alarm went off. Not only did I have no idea what the pin code was, I also did not even know it worked at all as the interface looks ancient, frankly. The noise was loud and insistent and Tina was so scared she hid under the sofa and would not come out. It took me a while to get the code from the estate agent and even once we stopped the alarm, she was inconsolable. She was hiding for well over an hour and no treats worked. Poor things, they really hate loud noises, don’t they?

This sunny winter lunch bowl is pretty much what we have been having for lunch lately. It’s easy to put together, tasty, nutritious and pretty to look at too, which is always a bonus. It’s also very versatile (swap spinach for kale, radishes for turnips, sweet potato for parsnips, artichoke hearts for olives) and yields itself to making a large quantity in advance quite well. I make a large amount of quinoa, sweet potato, toasted seeds and dressing at the beginning of the week and simply chop raw veggies on the day, et voila! Lunch has been served! 🙂 . 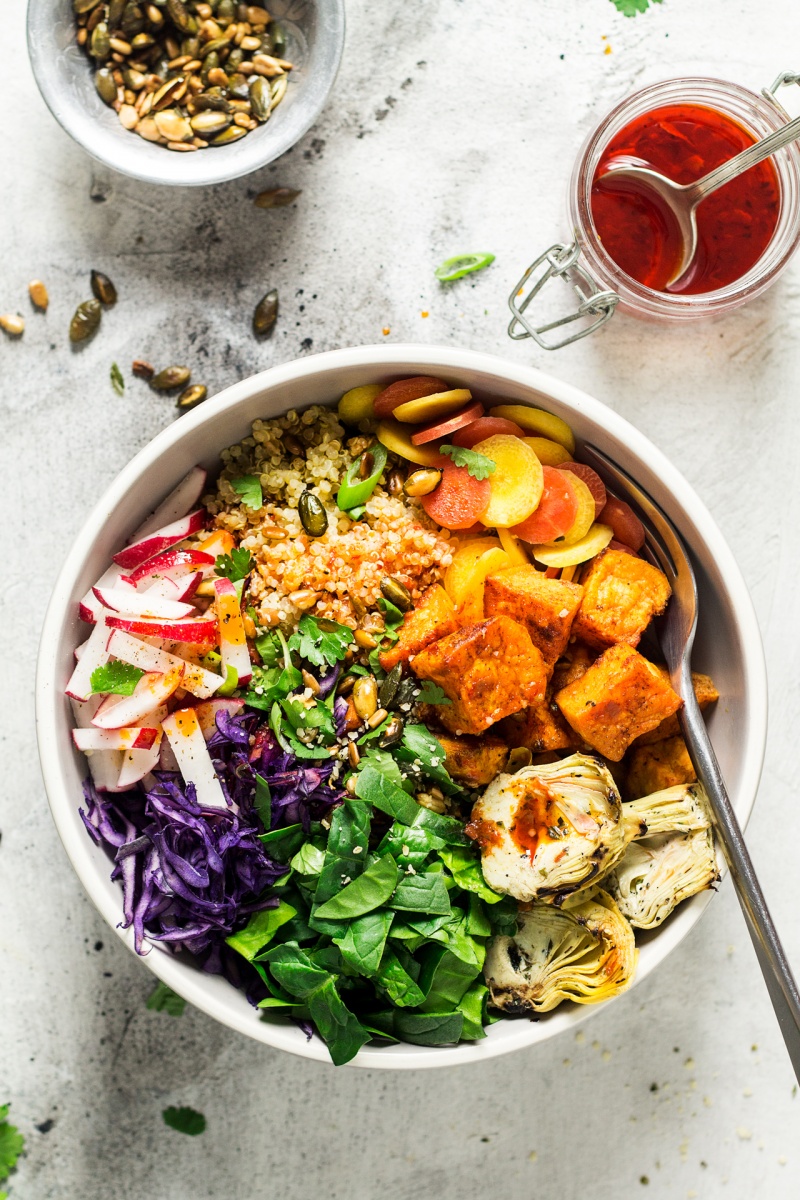 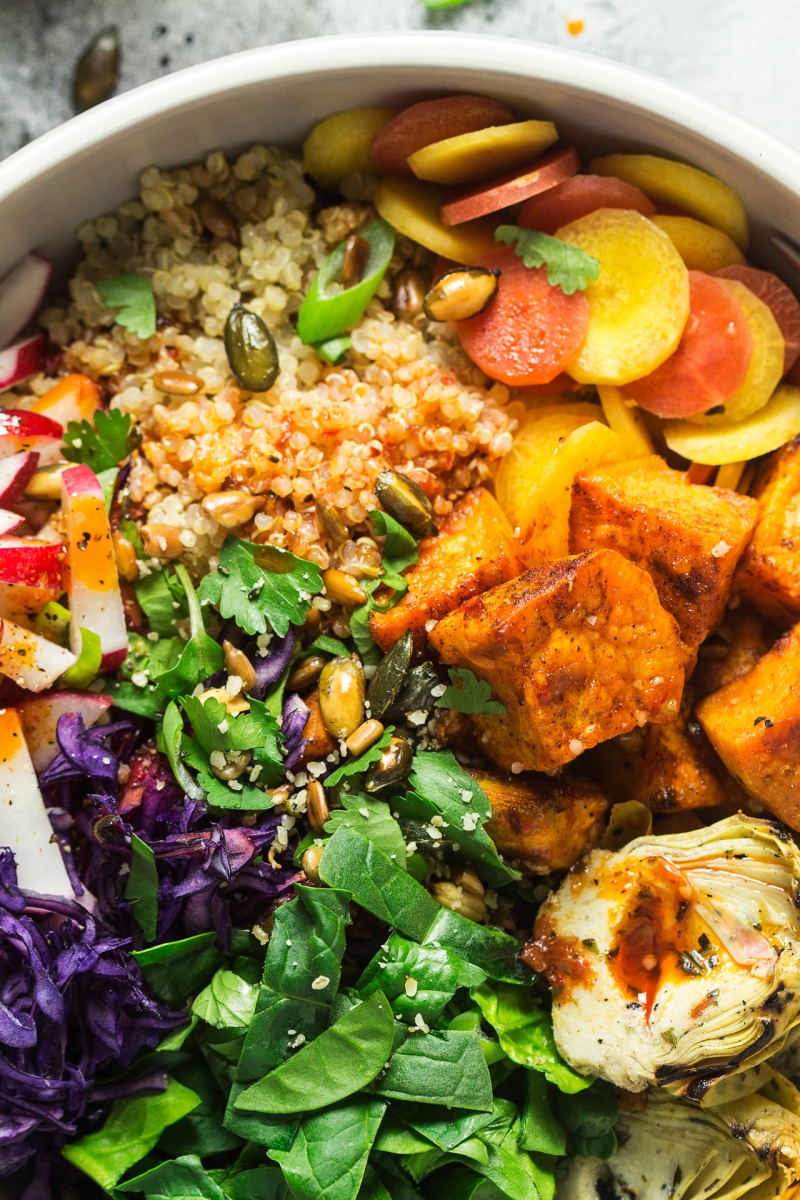 PS: If you do make my sunny veggie bowl with harissa dressing, don’t forget to tag me on Instagram as @lazycatkitchen and use the #lazycatkitchen hashtag. I love seeing your takes on my recipes!

Hi, I'm Ania. I love good food but I love animals more! Adopting a plant-based diet has been the best decision I've made and that's how this blog was born. It's a space where I want to show you that creating delicious plant-based food isn't actually hard at all.
END_OF_DOCUMENT_TOKEN_TO_BE_REPLACED