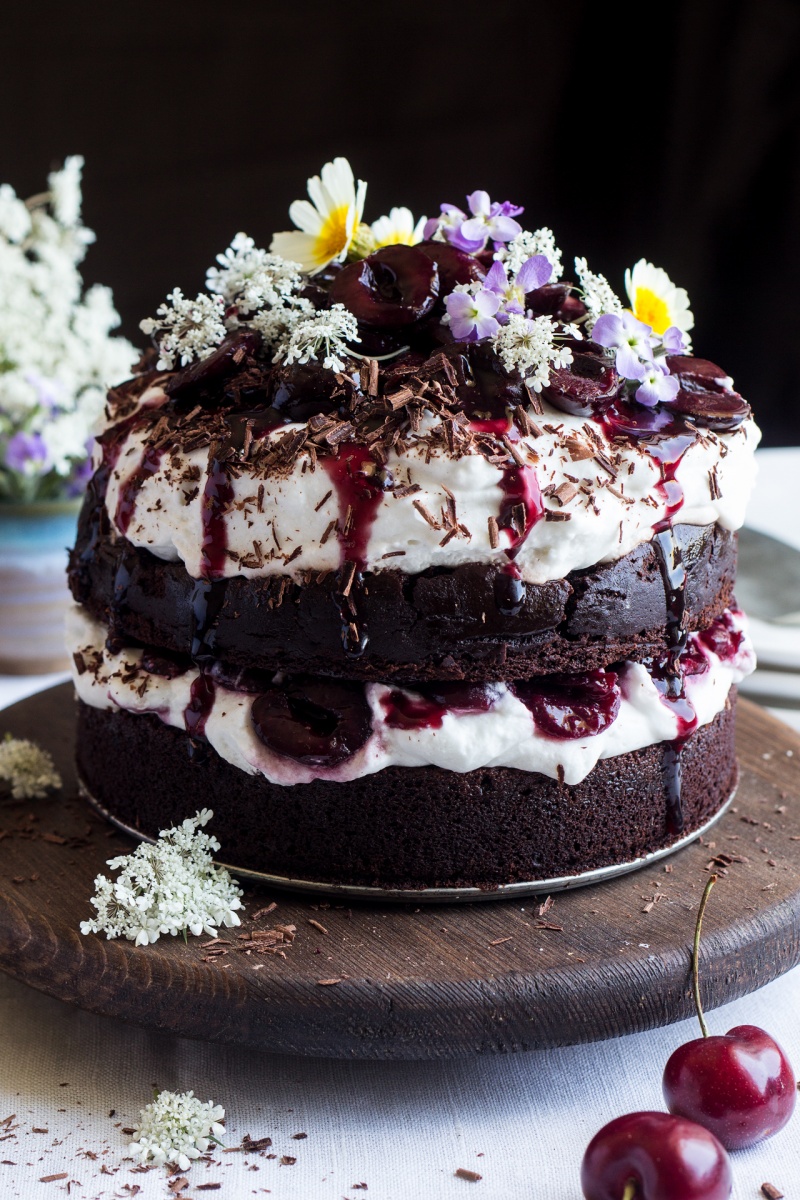 As Greece appears to be in the stone fruit season here, today my beloved cherries (I don’t think I’ve ever met a fruit I didn’t like…actually, I still need a bit of convincing from Durian 😉 ) take the centre stage in this pretty handsome vegan black forest cake.

This cake was loooong in the making! Why? As it’s tricky! Not the cake itself but making a stable vegan cream that doesn’t turn into liquid was a challenge, I’ll admit!

After a number of experiments, I decided on an airy mixture of aquafaba and coconut cream. By marrying the two together, the cream isn’t overly coconutty and it’s way lighter (and contains less fat) than a 100% coconut cream does. I also found that all my attempts at whipping chilled coconut cream (despite using an additive-free brand) have proved really underwhelming – the result is never fluffy enough for my taste.

This puppy, took me a few goes to get right (if you follow me on Instagram you might have seen an Instagram story of its collapse at some point), but once I arrived at the right ratios and reinforced it with a touch of xantham gum, it really did the job. It lasted 4 days in the fridge and it would have maybe even lasted longer if not for the fact that the cake disappeared into the abyss of our and our neighbours’ mouths 🙂 .

An important thing here is to make the cream a day in advance (the cake itself can be made a day early too) and store it in the fridge overnight. Chilling the ‘cream’ stiffens it considerably, which ensures that once you stack two layers, one on top of the other, it won’t collapse under the weight of the top layer.

PS: If you make my vegan black forest cake, don’t forget to tag me on Instagram as @lazycatkitchen and use the #lazycatkitchen hashtag. I love seeing your takes on my recipes! 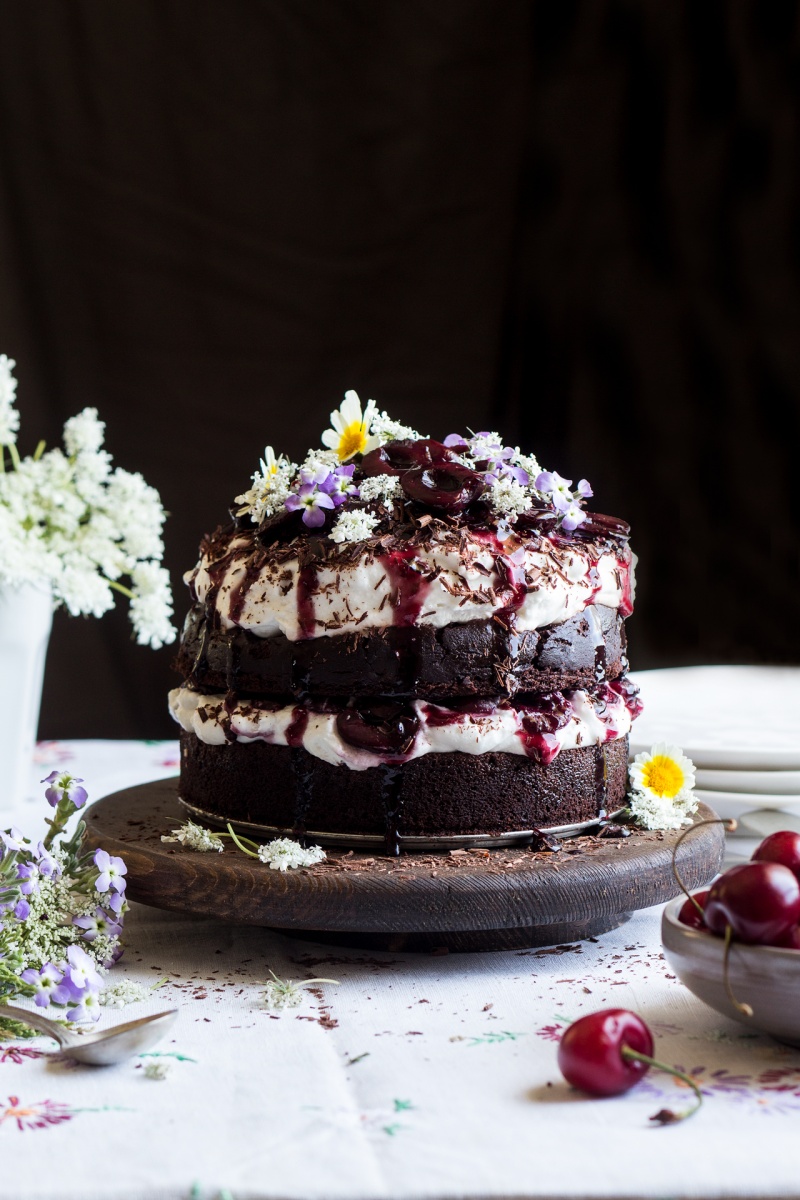 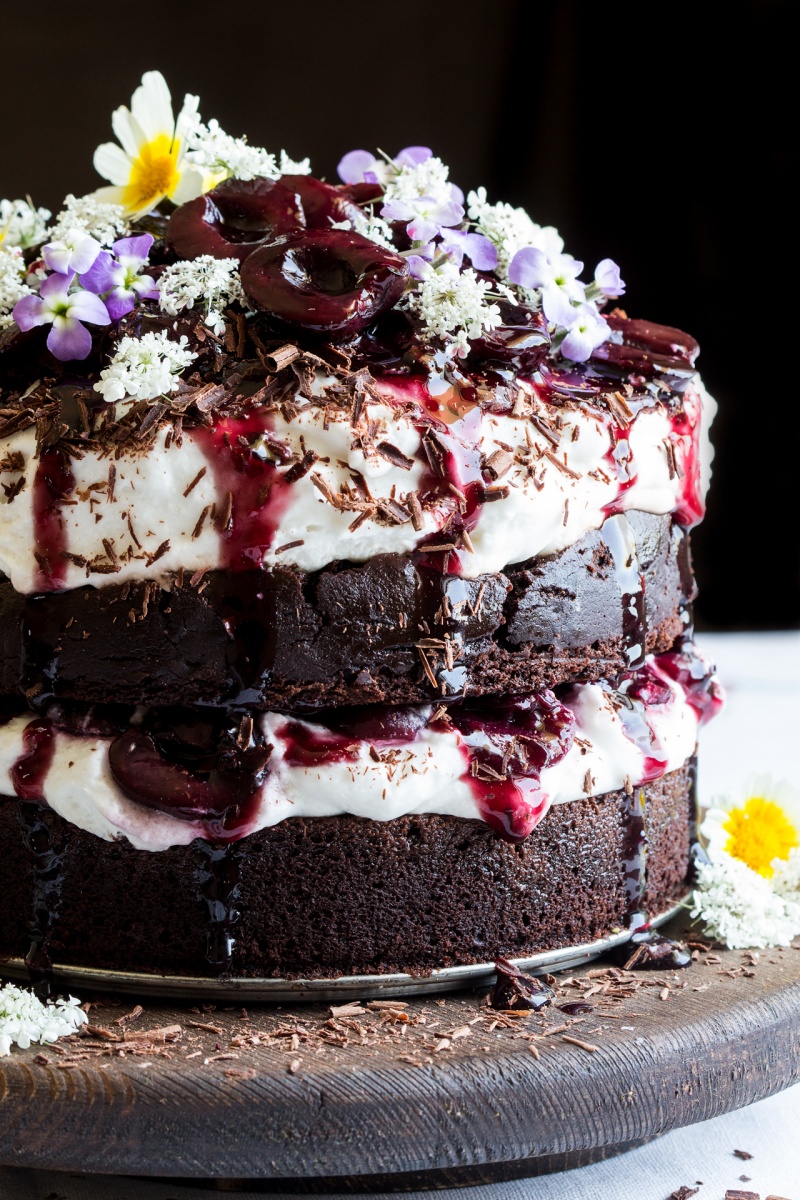 CREAM (make the day before)

NOTE: It’s essential to make this cream the day before and refrigerate overnight in order for it to stiffen.

***If you cannot / don’t want to have coffee, you can substitute with more plant milk. Coffee flavour does not come through here, it simply accentuates the chocolate flavour.

Hi, I'm Ania. I love good food but I love animals more! Adopting a plant-based diet has been the best decision I've made and that's how this blog was born. It's a space where I want to show you that creating delicious plant-based food isn't actually hard at all.
END_OF_DOCUMENT_TOKEN_TO_BE_REPLACED

#vegangyros with roasted #jackfruit created when I

Signing off with a delightfully creamy and super e

For the #greekfood aficionados amongst you, I have

How about a Greek inspired #eastermeal? On the blo

I'm shooting an exciting new recipe for you today