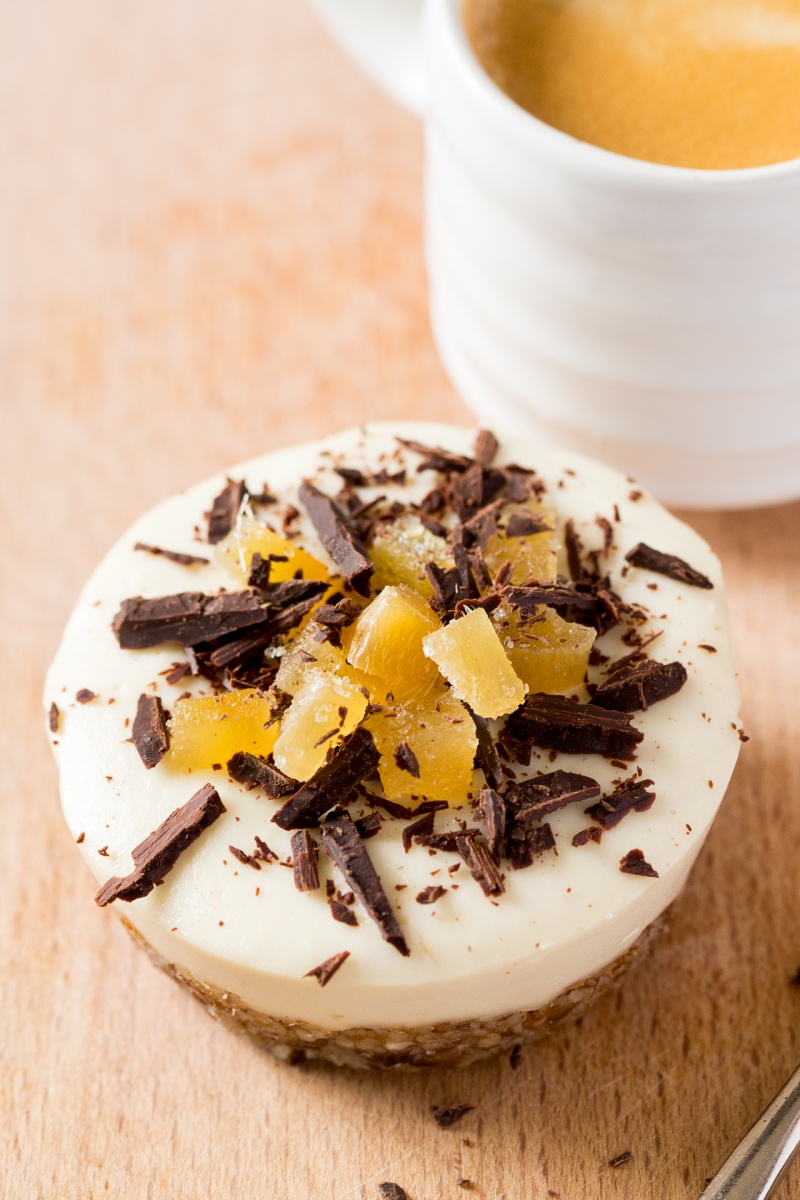 I am insanely excited to share this recipe with you today. It was a true labour of love and at some point, I wasn’t sure if I am ever going to have a ‘cheesecake’ recipe I’ll be proud enough to share.

When it comes to my previous attempts, there were a few issues at play. I do not own a Vitamix or an equally powerful blender so in order to get my cashews blended super smooth, I had to add quite a lot of liquid to them. Normally, this could be remedied by using coconut oil as part of that liquid, which solidifies in cold temperatures giving a cheesecake its texture, but I was not terribly keen on this idea.

As I live on a small island, sometimes it is really difficult to get some things here. The only type of coconut oil I was able to buy was an extra virgin coconut oil, which is healthier but it makes everything taste and smell of coconut. Secondly, I simply couldn’t bring myself to add oil to a dessert that is already pretty indulgent. My heart was set on either making a creamy cheesecake with no oil at all…or nothing

I made quite a few attempts but I will be lying if I said that I enjoyed any of them that much.

As it often happens, just as I was at the point of abandoning the cheesecake mission altogether, I had a true light bulb moment. What if I was to dissolve a small amount of agar agar flakes (vegan gelatine) in the liquid that I use to blend the cashews with? Surely, this will coax my very average blender into giving me a silky smooth cheesecake mixture and help my cheesecake set without any need for oil.

My second idea was to see if aquafaba – the miraculous vegan egg replacement – will help me achieve more creaminess. And guess what? It did. I tasted two versions side-by-side (yeah, it’s tough being a food blogger!) and the one with aquafaba (as opposed to water) was definitely creamier and had a much better texture. I only used half a cup of aquafaba as I did not want even a hint of beany flavour in my final product. Duncan, who has been very critical of my previous cheese-free cheesecake making attempts, loved this cheesecake too, so I think I have finally found my winning, oil-free, cheesecake formula! 🙂 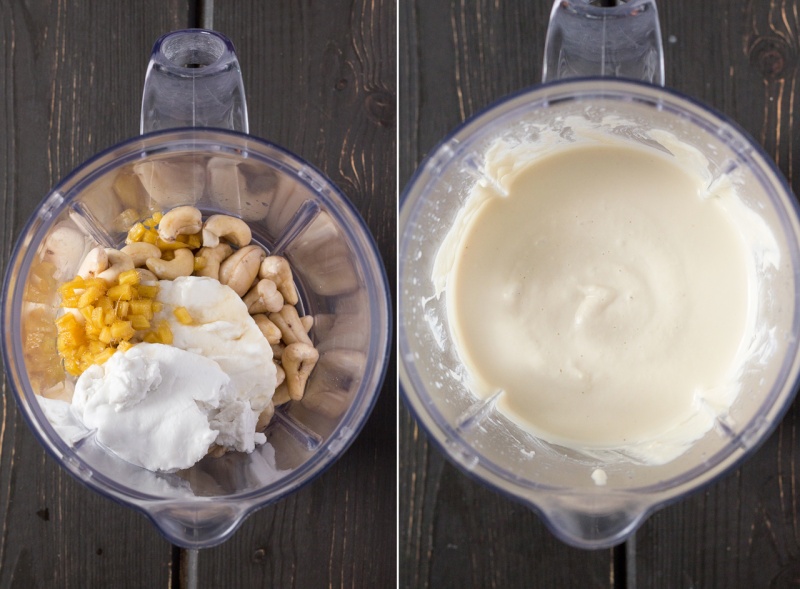 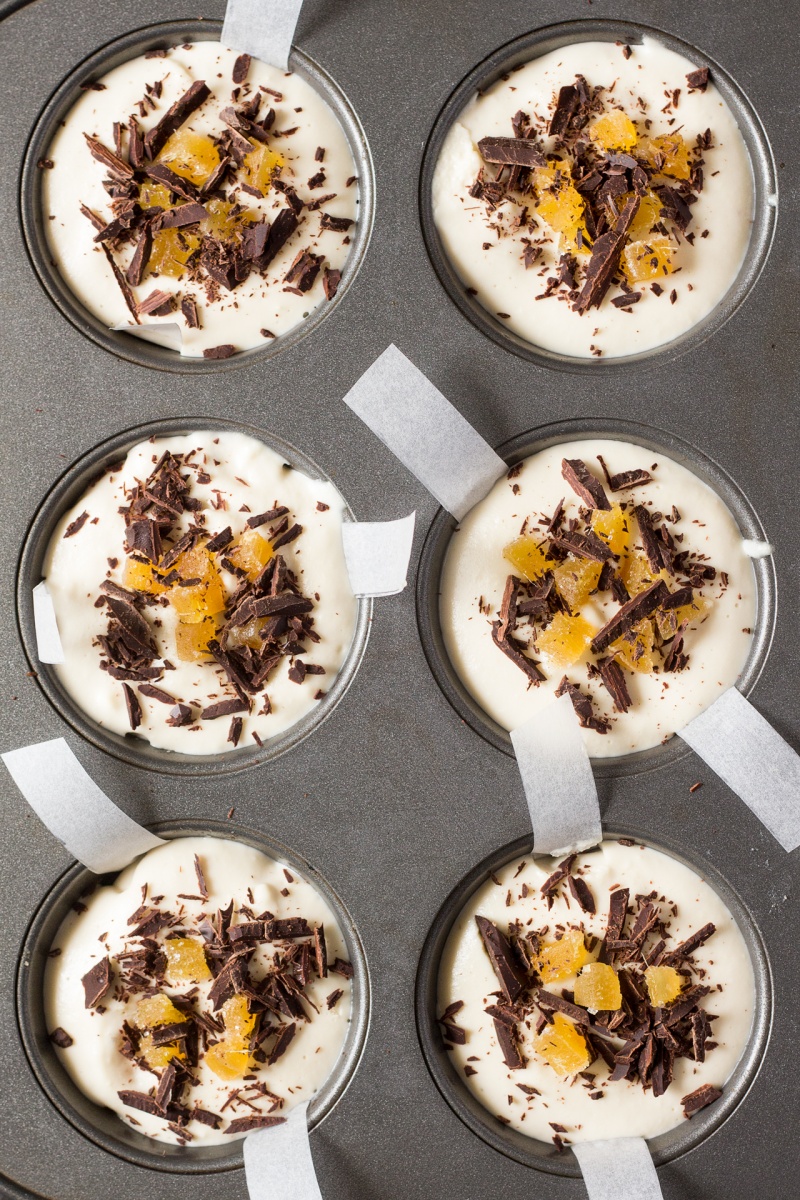 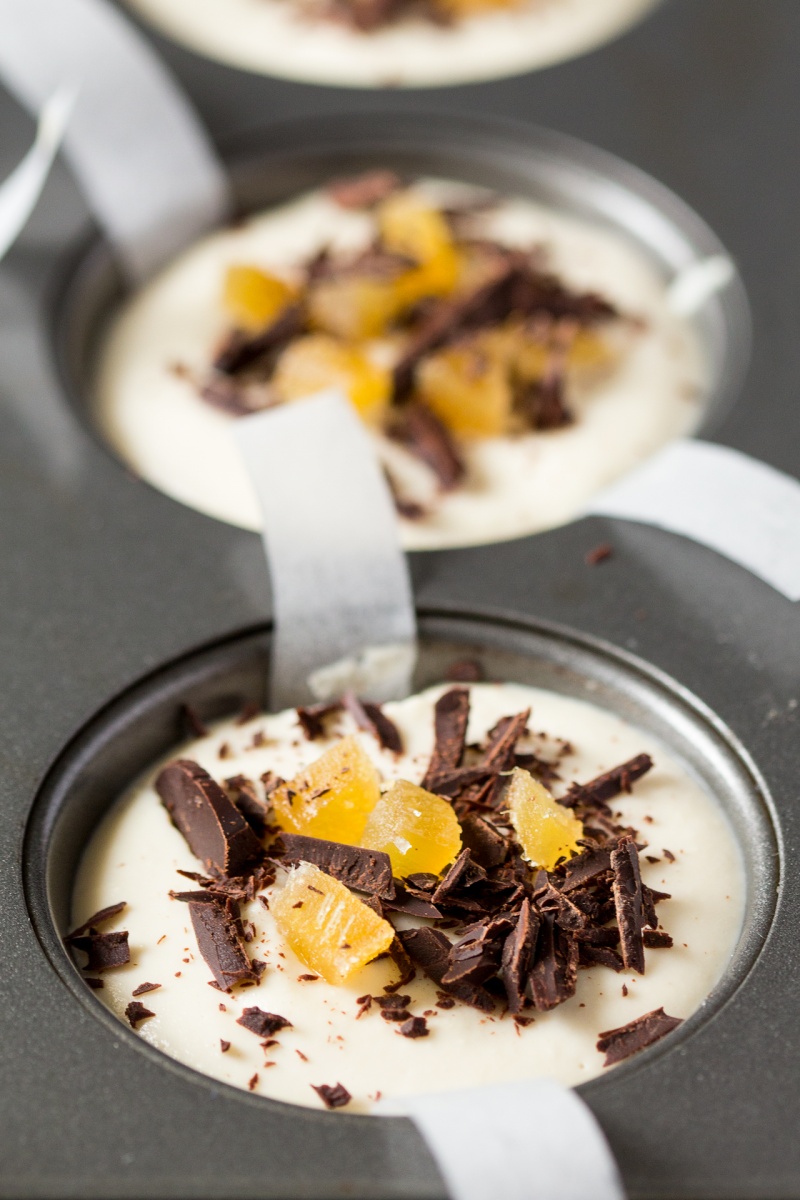 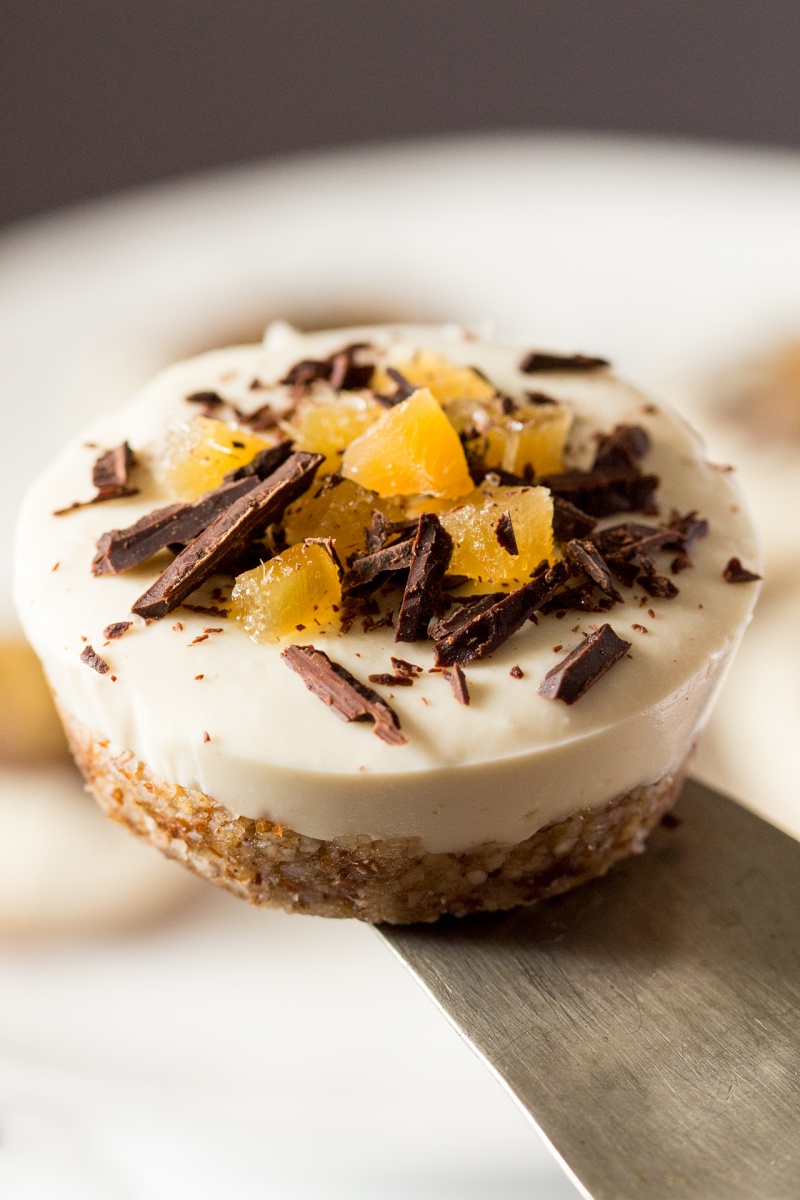 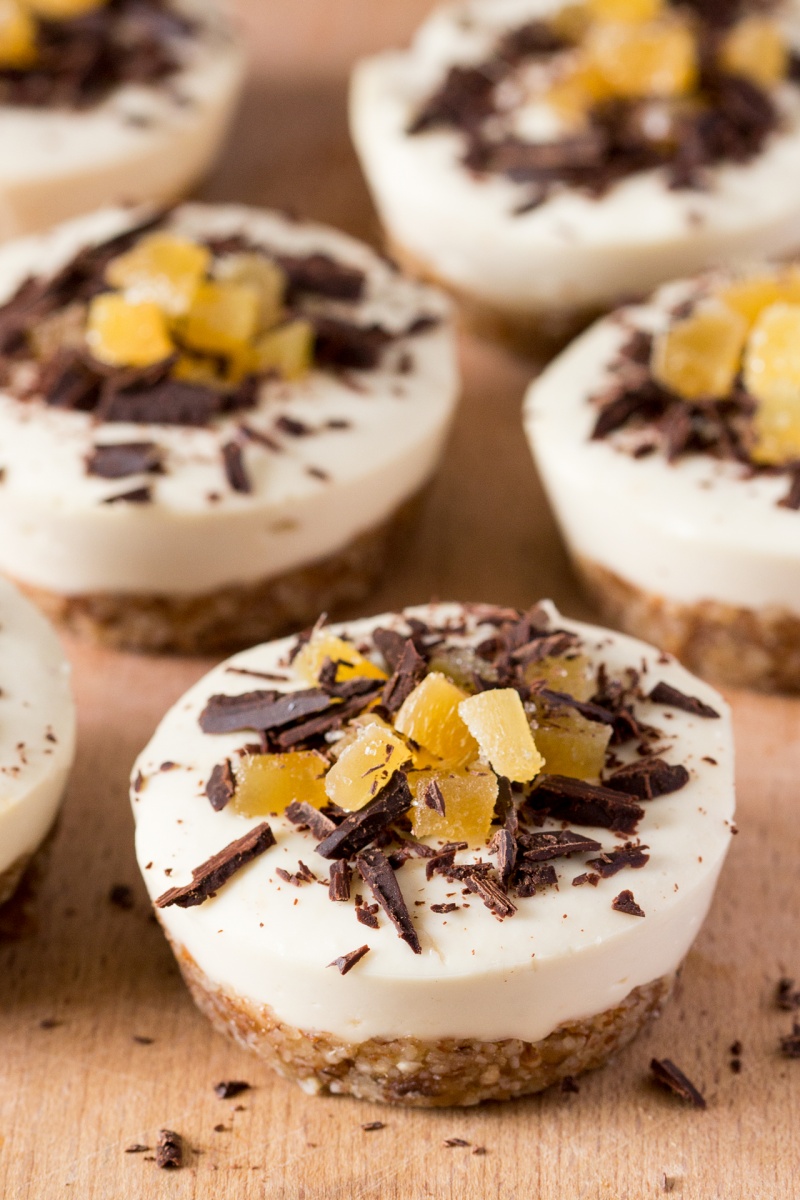 NOTES
*I have never used agar powder, but if that’s the only agar you have, conventional wisdom says that 3 tsp agar flakes equals 1 tsp agar powder, so for this recipe I would use just over 1 tsp of agar powder. If you are using a spring-form tin (which means you do not need to be getting the cheesecakes out) use less agar for a more delicate texture – 3 tsp of flakes / 1 tsp of power will be more than sufficient.

**Aquafaba – water from a can of low-sodium chickpeas or from cooking dry chickpeas at home. I didn’t reduce aquafaba for this application. 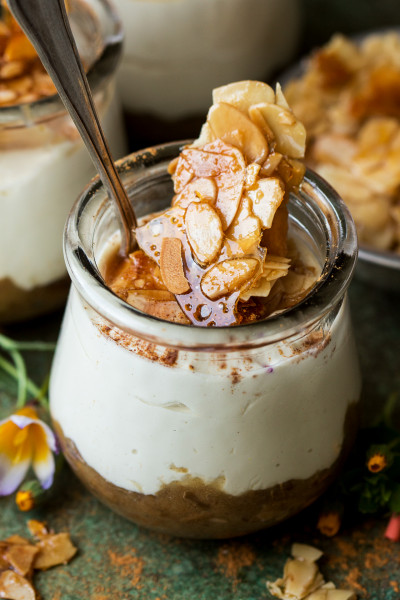 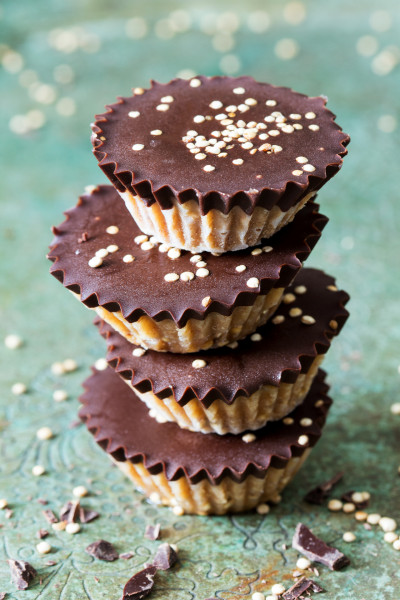 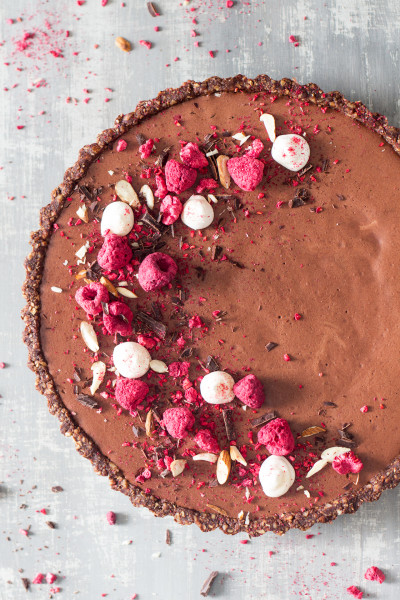 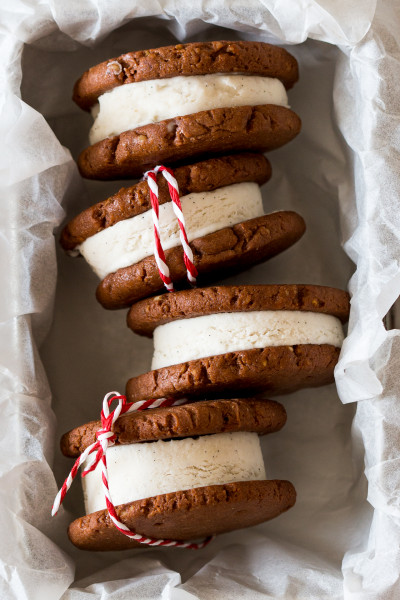 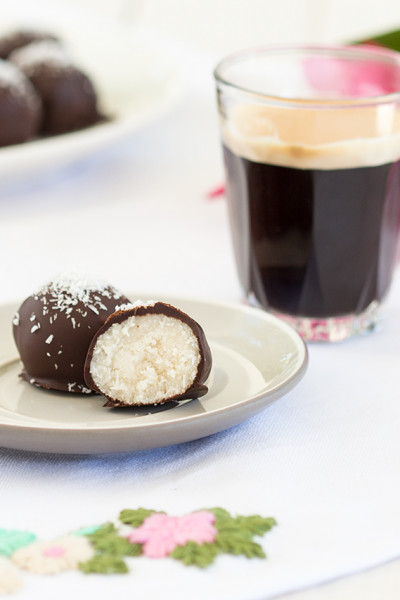 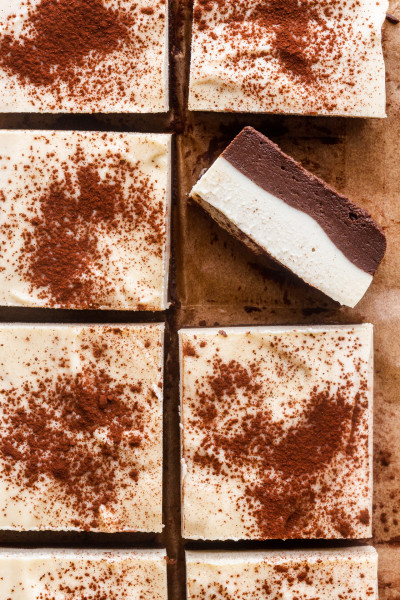 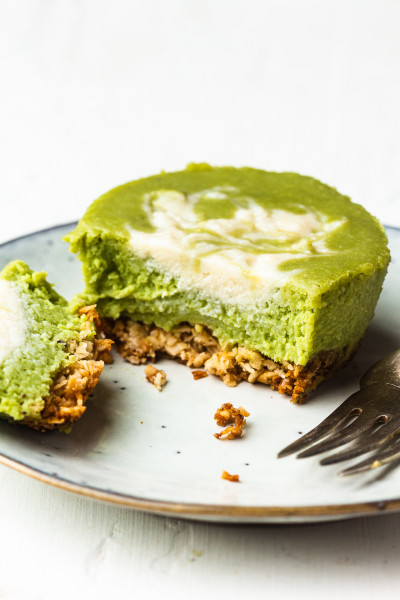 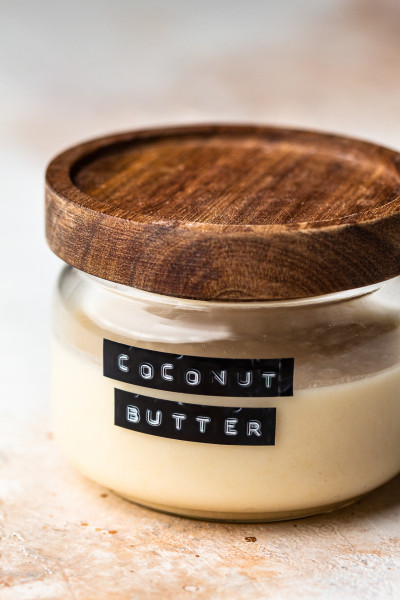 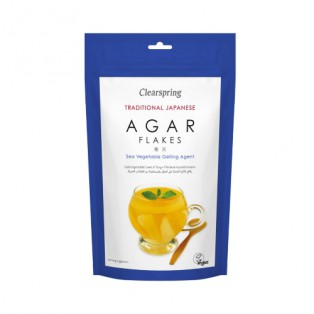 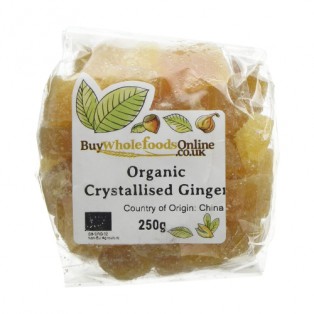 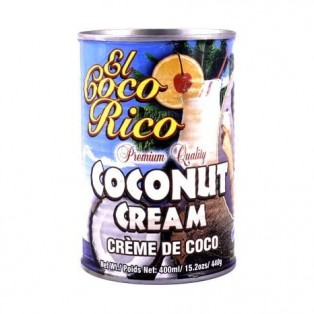 5.0
1 review, 22 comments
REVIEWS & QUESTIONS
Dan Wilcox:
REPLY
I love your recipes and it is obvious that you put a lot of work into testing them so one knows that the recipe will work when it is made. I wondered with this recipe if you have tried a combination of arrowroot and agar agar as I have made a pumpkin cheesecake and found that the agar agarr can make it firm but less creamy but with the arrowroot combination the texture was more creamy. However, I have not tried this recipe yet, so may realize that it is perfect the way you have made it!
Thanks again,
Dan

Ania:
REPLY
Hi Dan,
Thank you, I'm glad that you enjoy my recipes. I have not tried that combination. In my experience to date, I find that the amount of agar agar has to be very finely calibrated so that the dessert is barely set and not so set that it's rubbery, but adding some arrowroot (or any starch) to help the texture does sound like a sound idea for sure. Good luck! Ania

Sara:
REPLY
This looks wonderful! I want to make this, but my partner is allergic to maple syrup. Do you think in the cheesecake I could use agave instead, or do you have any other suggestion?

Ania:
REPLY
Hi Sara, yes, agave syrup is a perfect substitution. You could also use icing sugar and dissolved in some water if you wish. Hope that helps! Ania

Honey:
REPLY
This looks great, I'm definitely giving it a try! I prefer cheesecake without oil in it as well. I recently came up with a baked version using cashew cream cheese as the base that turned out really yummy!

Ania:
REPLY
Thanks, I hope you'll like it! Baked version sounds great too! Ania

Kate:
REPLY
Many thanks Ania. I upped the cashews by 1/2 cup and it turned out beautifully! Do you know if the cheesecakes freeze well?

Ania:
REPLY
Hi Kate,
So pleased that the cheesecake turned out so well for you! I haven't tried freezing them as there are hardly any leftovers usually ;) but I don't see why that wouldn't work! Ania

Kate:
REPLY
Hi! I think all your cheesecake recipes look amazing! I'm so excited to try them but I have one problem...I can't eat coconut. Will it still work if I omit the coconut cream? Is there anything I could replace it with? Thanks for all your amazing work on the blog.

Ania:
REPLY
Hi Kate,
Aw, thank you, I am pleased to hear that you like the look of my cheesecakes. With regards to coconut, I would simply increase the amount of cashews or maybe sub coconut cream with silken tofu? It depends on the final flavour you are aiming for as tofu does have detectable taste, but if you want to make ginger cheesecake, for example, I don't think you will able to taste tofu at all. Good luck and let me know how it went! x Ania

Elizabeth Abott:
REPLY
Wow this looks divine! Could I possibly omit the agar in this recipe? Will it still have a bit a structure or completely fall apart?

Ania:
REPLY
Hi Elizabeth,
Unless you have a very powerful blender like Vitamix, I would say that it won't work without agar, unfortunately. If you do have Vitamix, it will probably allow you to blend soaked cashews really smooth without adding any water to them (final ingredient) and this would probably give you a delicate (set but not firm) cheesecake without agar. Having said that, it's just a guess as I don't own a Vitamix myself.
Hope that helps,
Ania

Sheila Wilson:
REPLY
I also don't have a Vitamix, just a so-so blender, so when a recipe needs cashews or almonds to be blended really smooth, I first grind them into a 'flour' in my little electric coffee grinder - works like a charm.
Lauren Elizabeth:
REPLY
This looks amazing! Im wondering thiugh, is it possible to omit the ginger flavouring and just make a regular plain cheesecake using this recipe?? If so how wouldi adjust it? Thanks :)

Ania:
REPLY
Hi Lauren,
Thank you! I would say it is certainly possible. Skip making a ginger syrup and simply sweeten the mixture with straight maple syrup and add seeds from one vanilla pod (or some quality vanilla essence) to the cashew/coconut mixture for a subtle vanilla flavour. Other than that just follow the recipe as is. Let me know how they turned out!
Good luck!
Ania

Lauren Elizabeth:
REPLY
Oh goodie! Thanks alot :) so would i just use the same amount of maple syrup listed in the ginger syrup ingredients but without reducing it with water?

Ania:
REPLY
No worries! :) Just adjust the amount of maple syrup to taste, it won't affect the consistency of the cheesecake.

Lydia:
REPLY
This looks great! How does it taste? Does it taste like cashew or real cream cheese? Thanks!

Ania:
REPLY
Hi Lydia,
Thank you :) It certainly does not taste of cashews at all. I had 3 omnivores taste these and none of them guessed that it wasn't a regular cheesecake made with cream cheese. I hope you'll give them a try! If you are worried, perhaps halve the recipe - that's how I did all my test batches!
Ania

Lydia:
REPLY
Thanks so much Ania! I will definitely give it a try tomorrow!

Wendy Gerster:
REPLY
Sounds fascinating, looks brilliant! Wish I had more time to try things out - when I do, this will be one of them!

Ania:
REPLY
Thanks Wendy:) I hope you do try them - I'm really proud of this recipe! I'm already scheming new flavour combinations :)