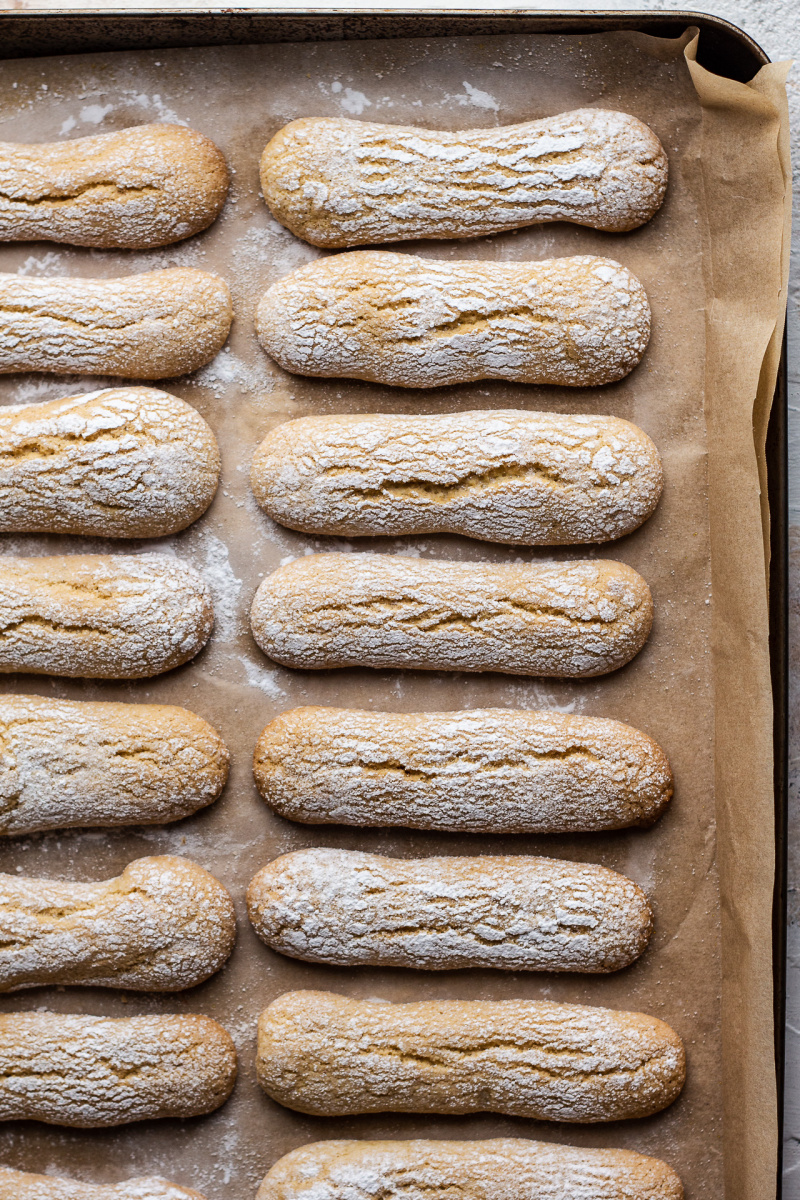 Ho ho ho, where did all the time go? (stunned face emoticon here). Once again, the proximity of the festive period has taken me completely by surprise this year. Well, not quite as I did mark it in my calendar so that I can focus my mind on festive recipe creation ahead of the time, but it still feels a touch too early to be baking all these cookies, coming up with impressive dinner centrepieces and flamboyant sides.

Today’s recipe is a bit of a tease. I’ve been working on vegan lady fingers also known as savoiardi biscuits on and off for two years or so and have plenty of failed biscuits, which turned into sad flat puddles, under my belt. This year I’ve decided that I really want to make a proper vegan tiramisu for the blog (recipe now live, here), so before I do I’ve got to put this recipe to bed. And I am pleased to report that after countless sinks of washing up (that’s the least fun part of recipe creation), I have come up with a vegan lady fingers recipe I am happy with.

They are not hard to make – the key skill here is being able to fold ingredients into each other super gently – and the best thing about them is that they keep for ages provided you lock them away from any source of humidity. This means that if you plan to make tiramisu for your Thanksgiving or Xmas meal, you can make the lady fingers two or even three weeks in advance and lock them away safely until the time to get on with the cream comes. Just make sure that no one is sneaking up to your hiding place at around afternoon coffee time on a daily basis 😉 . 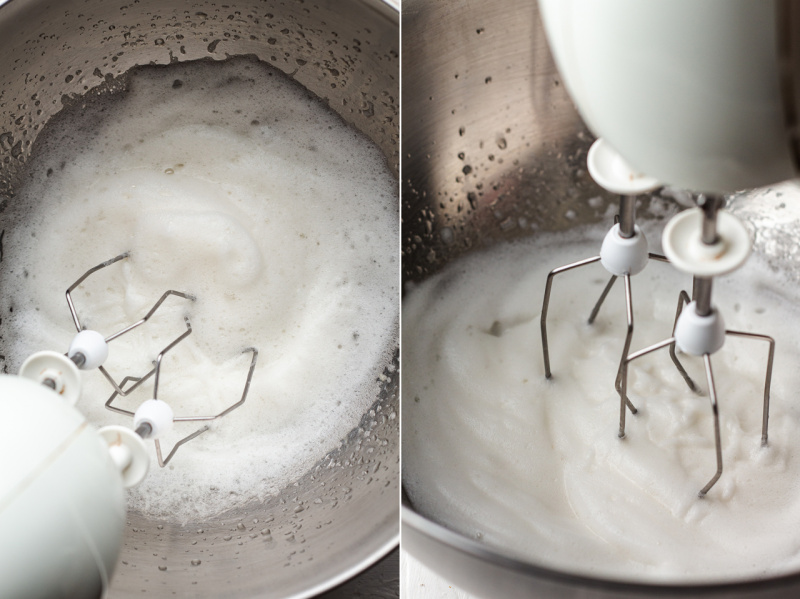 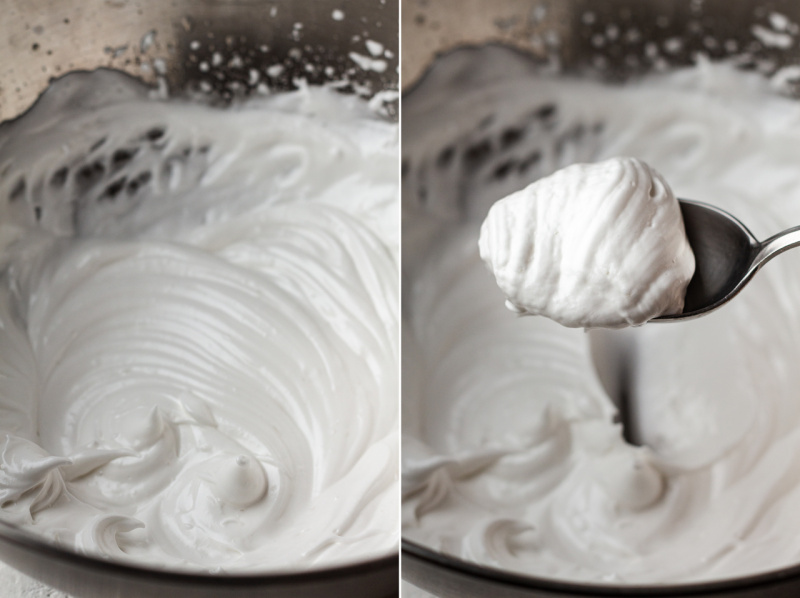 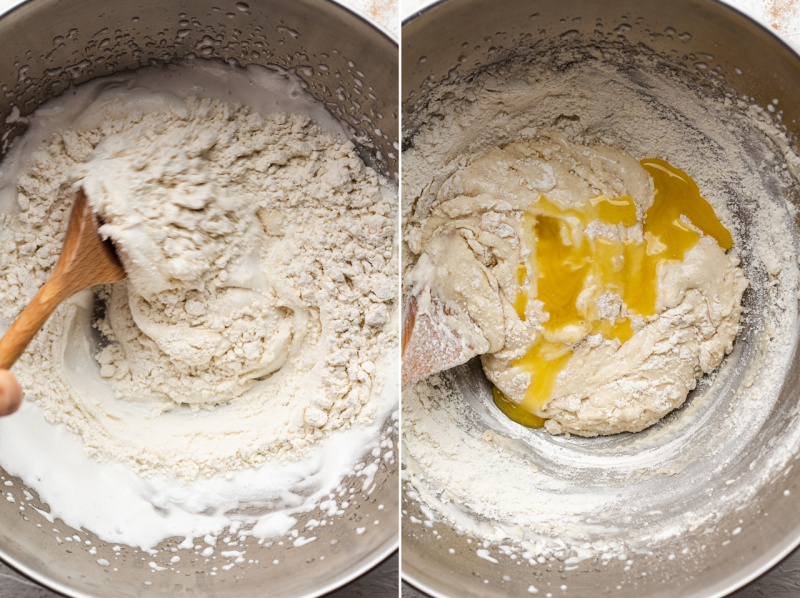 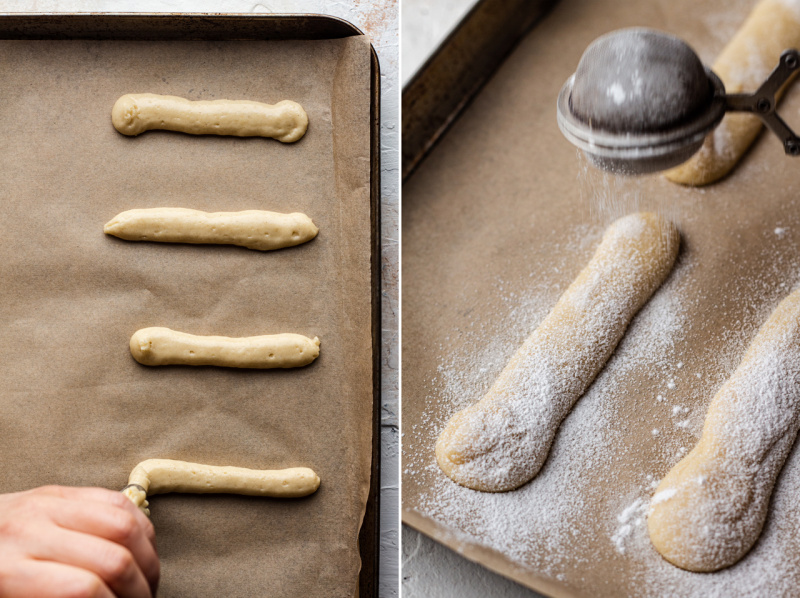 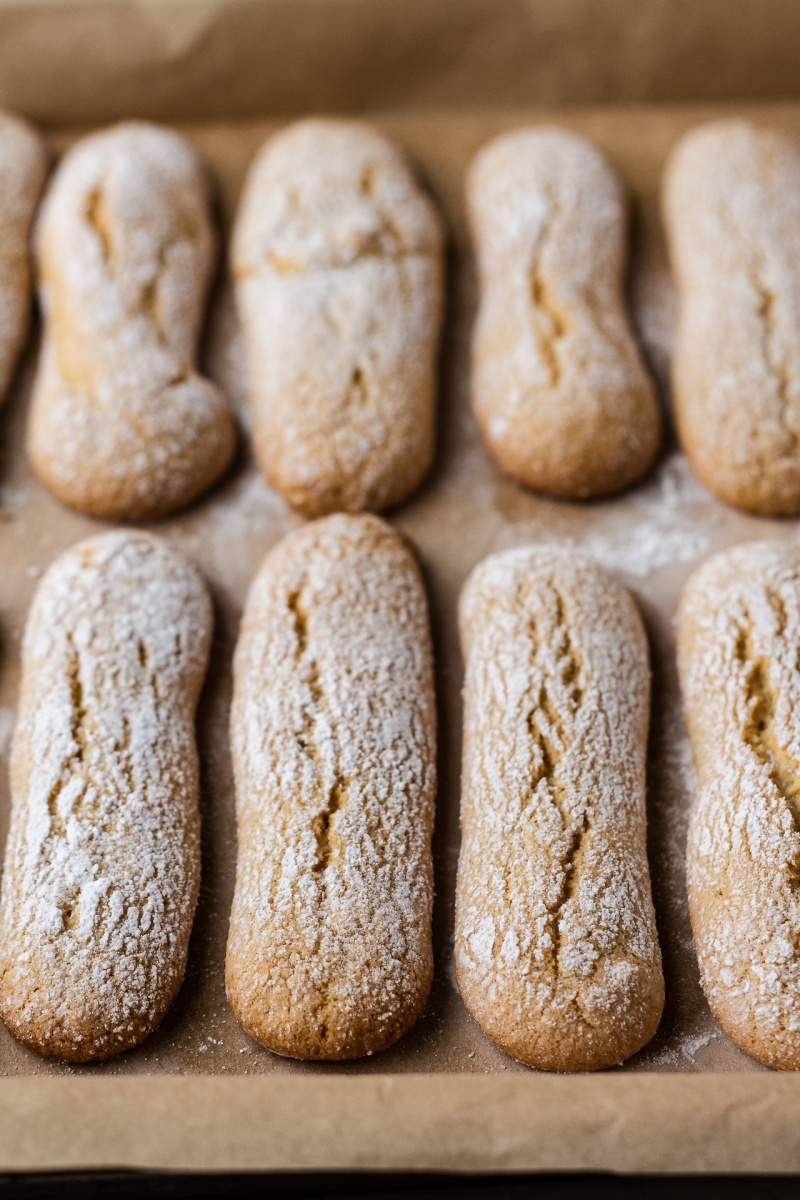 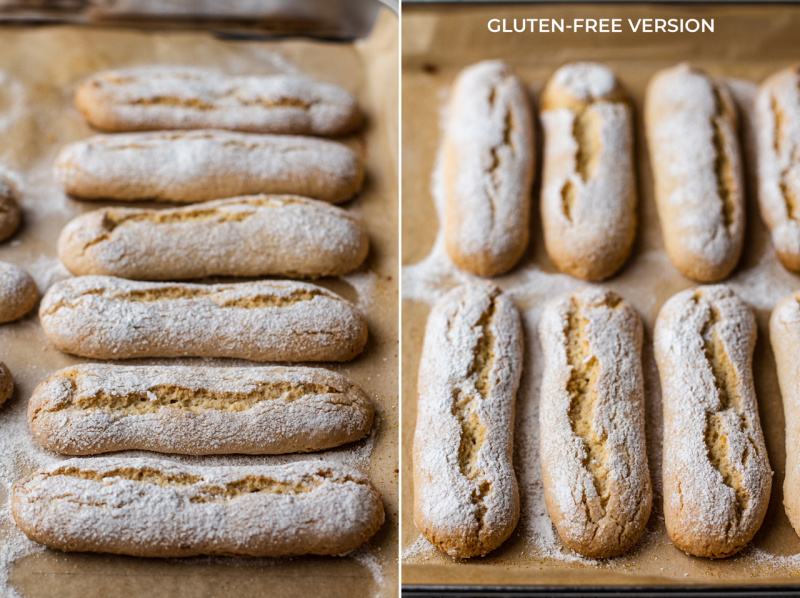 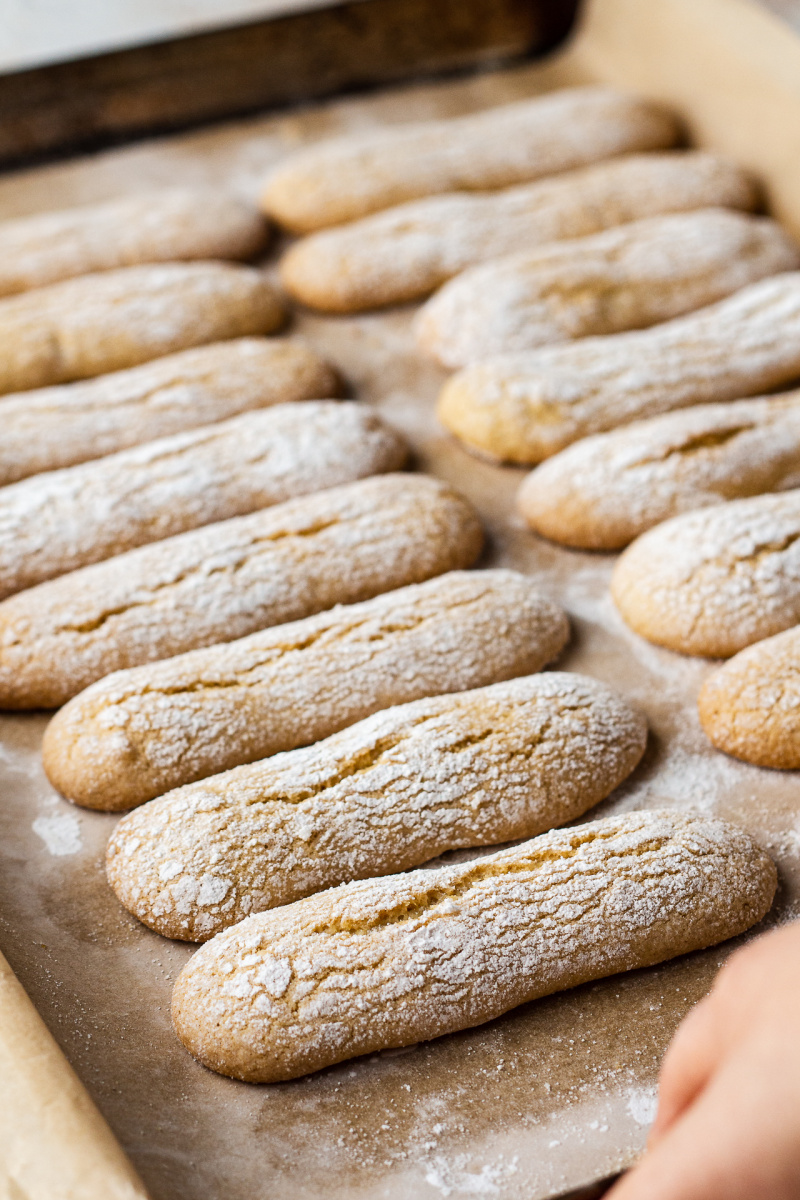 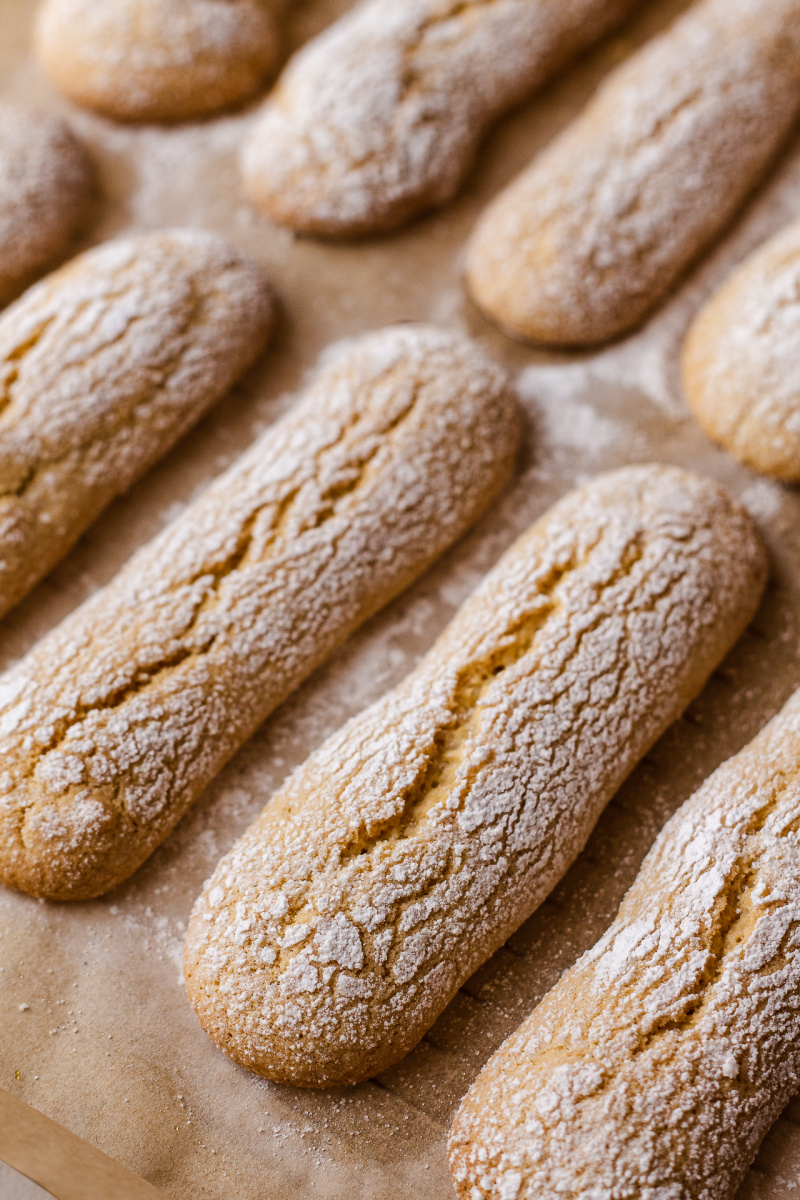 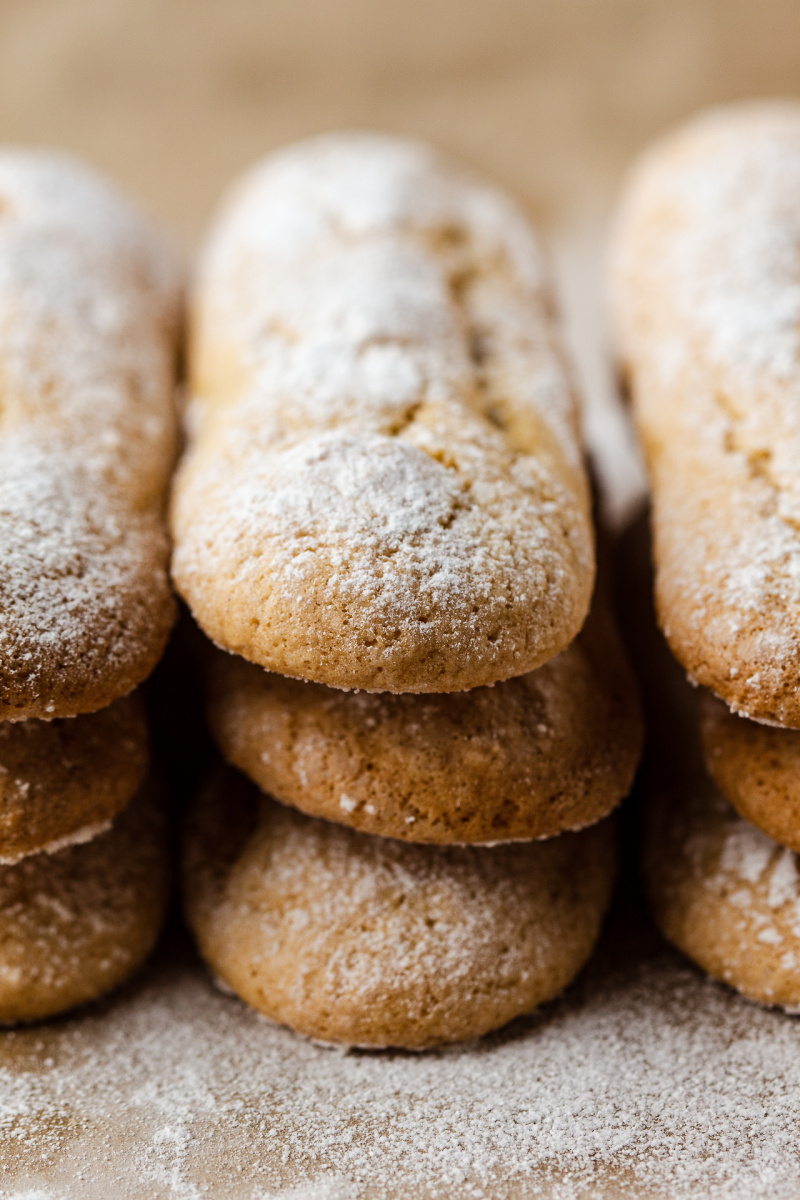 METHOD
NOTES
*VANILLA EXTRACT: if using vanilla pod seeds or powder instead of extract, make sure to replace lost liquid with plant milk, for example.

My tiramisu recipe is available here. 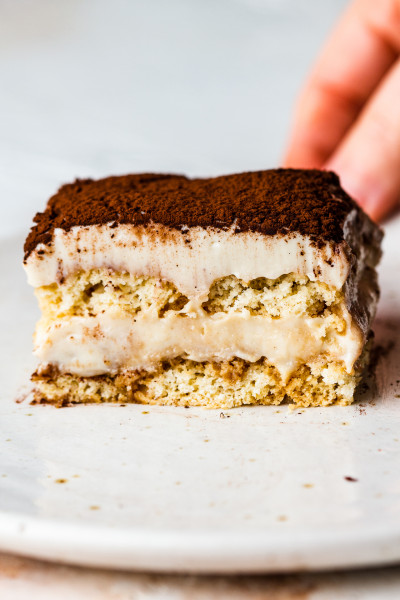 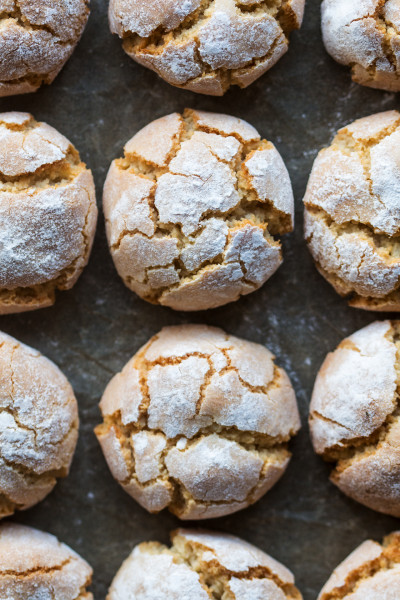 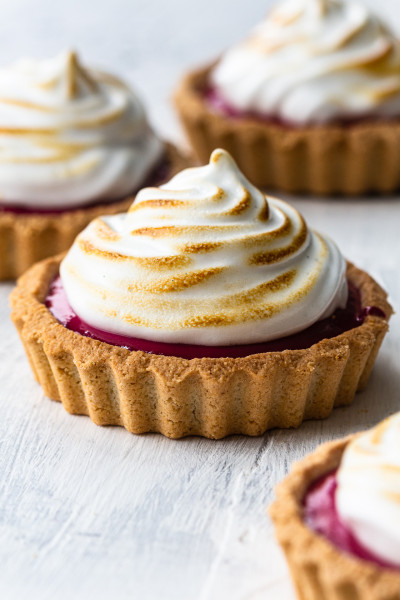 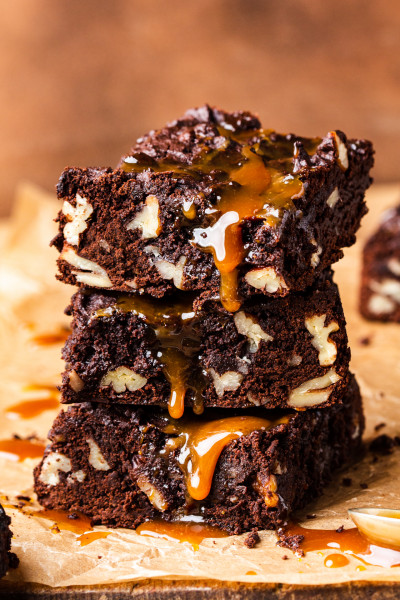 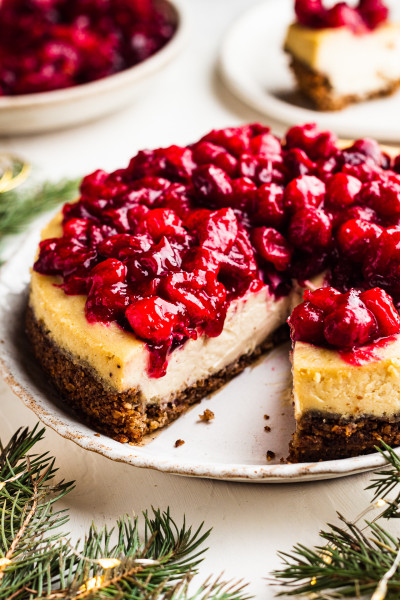 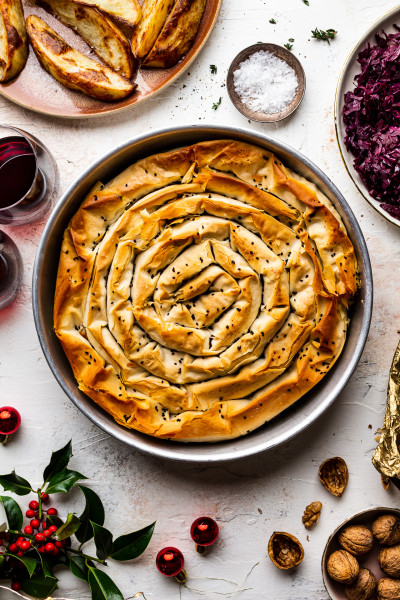 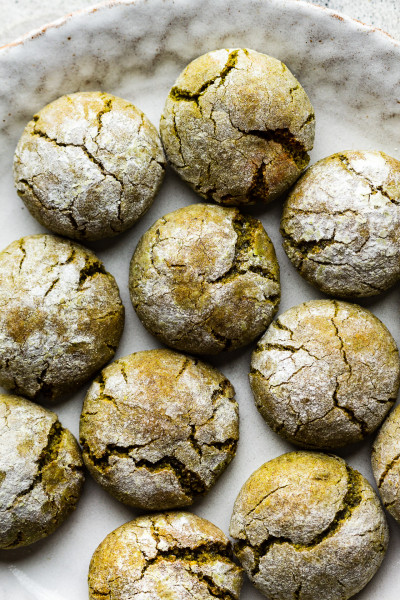 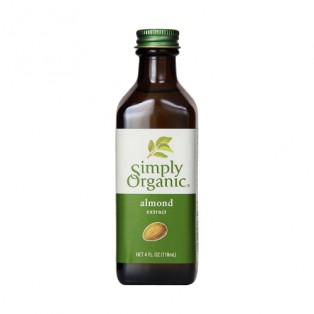 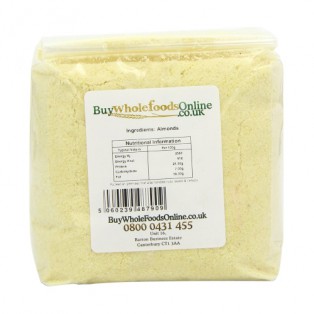 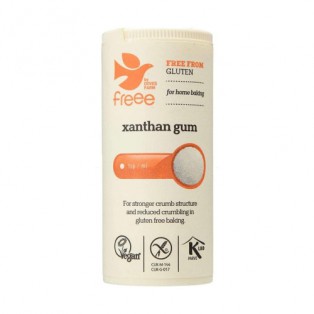 5.0
9 reviews, 17 comments
REVIEWS & QUESTIONS
Rachel:
REPLY
These turned out amazingly! They made a delicious vegan tiramisu and the few left over went perfectly with my morning cup of coffee. I was a little nervous when folding the dry ingredients with the whipped aquafaba, as it seemed like there was too much dry and all the air was dissappearing but in the end it was fine 🤗

Ania:
REPLY
I'm delighted to hear that, Rachel, thank you! And I really appreciate you taking the time to leave this lovely review. x Ania

Helen:
REPLY
These were fantastic, great recipe - so easy to put together! I made the regular version but I have a Celiac friend coming over for dinner soon and I cannot wait to make your tiramisu for her, I bet she will love it too. Helen

Ania:
REPLY
Thanks Helen, I'm so pleased to hear that. And I hope your friend will enjoy it just as much. x Ania

Elena:
REPLY
I tried the gluten free version and the result was just perfect! I used in a vegan & gluten free tiramisu.
Thank you for the recipe!

Ania:
REPLY
Aw, thanks so much, Elena! I am delighted to hear that you found these to be just what you were looking for. Thank you for taking the time to review this recipe, I really appreciate it. x Ania

Rita:
REPLY
Hi Ania, thank you very much for this recipe, the ladyfingers turned out really nice :)
I also tried the gluten free version but the dough was way too dry - impossible to push through the piping bag. Probably my gluten free mix works a bit differently than the one you use, how would you solve this problem? Thank you!

Ania:
REPLY
Hi Rita,
Thank you, I am glad you enjoyed the regular version. As for the gluten-free one, yes, it does sound like maybe your mix had a higher percentage of starches so the mixture ended up too thick (I am assuming you used scales so there is little chance of any mismeasuring). You can simply add a small amount of plant milk or whip up more aquafaba to bring it to a pipeable consistency. Hope this helps x Ania

Jenny:
REPLY
Hey Ania,
They came out super nice. Crunchier than expected as the color was still very light, but perfect for tiramisu. I can't wait to eat the tiramisu tomorrow! Definitely a very good recipe, five stars from me!
I have one question though. Regular ladyfingers with eggs would require way more aquafaba (probably almost double) for the amount of flour/cornstarch you use. I assume you tried this and it didn't work out? Because the texture is very different from non-vegan ladyfingers, just was curious.

Ania:
REPLY
Great to hear, Jenny! Yes, they are meant to be quite crunchy so that the dessert does not end up soggy. Yes, but the mixture is way too runny and so they come out flat. Aquafaba is great but is no a 1:1 replacement for eggs, unfortunately. x Ania

Cecile:
REPLY
Who doesn’t love a Tiramisu. The recipe I have used in the past states to bake a cake then cut it and dry it out, like biscotti, so when I saw this recipe I was very excited.
The ingredients are things you would normally have in your cupboard, so I didn’t even have to venture out and pluck the red flower from the highest mountain top in Peru - although that would be an experience in itself!
The recipe is very well written and comes together exactly as indicated. I needed help with the piping as I didn’t have a big enough nozzle and the dough is very thick. My suggestion is to get a large nozzle. My husband ended up adapting a nozzle I never use to be bigger, and those biscuits came out very pretty.
Oven temperature- this depends a bit more on your oven, if you are a baker and you know your oven then adjust to how you normally bake biscuits, my first batch I made exactly as written and they came out a bit overdone, so on the second batch I lowered the temp a bit and they were perfect.
They don’t take long to make either, the longest part is whipping the aquafaba (chickpea water) and the baking…
These biscuits are delicious on their own too with tea, so if you don’t want tiramisu then bake them because you can. I think they will work really well for a trifle too!
What are you waiting for? Go on, you know you want to!

Ania:
REPLY
Aw, thanks so much for this lovely write-up, Cecile! I'm so happy that you enjoyed these and found them easy to make too and you are right, no rare or difficult ingredients so low barrier to entry so to speak ;) Good thinking on modding the nozzle you already had (satisfying, isn't it?) and yes, the oven temperature does sometimes differ so needs to be taken with a pinch of salt. They will definitely be used in a triffle recipe in the future. x Ania

Sonia:
REPLY
Hi Ania,
I made the biscuits a few weeks back and they came out beautifully. Then used them for your tiramisu recipe. Everything got wiped out clean in no time. Thank you so much for all the efforts you put in to make these perfect recipes. Love from India. ❤️

Ania:
REPLY
Aw, thank you so much for your kind words, Sonia! I'm delighted to hear that this and my tiramisu recipe were such a success with you and fellow diners. And thank you so much for this lovely review. Good reviews really help my work to be seen by more people so I really appreciate you taking the time. x Ania

Mary:
REPLY
Enjoy your recipes very much. So, I was surprised that you did not have the PRINT feature for the lady fingers. Was it just overlooked?

Ania:
REPLY
Thank you, Mary! I'm pleased to hear that. PRINT button is still there but only on our desktop version of the website - we've got rid of it on mobiles and tablets due to there being no space for it to be added elegantly and reasoning that people don't usually print from their phone. Ania

Shell:
REPLY
If you can it would be lovely to have the ability to print from mobile devices. I personally use my phone and iPad exclusively in the kitchen. I suppose we can take screenshots of the recipes and print those off too.

Vegan Cheese:
REPLY
This is so exciting! These Vegan Lady Fingers are so perfect! They taste really good , have the ideal texture and can be used to make Tiramisu. We can't wait for your full vegan tiramisu recipe!

Ania:
REPLY
Thank you, I'm glad to hear that you enjoyed them! And yes, tiramisu is coming...pronto! x Ania

Aimee:
REPLY
Oooo Im so excited about what I think *may* be on the way, after this new recipe addition!!!! Yay!!! You are such a hardworker!!! X

Ania:
REPLY
Thank Aimee, I hope not to disappoint ;) ! I try although learning to cut myself a bit of slack sometimes - doesn't come natural to me! x Ania

Candida Schwartz:
REPLY
Hi, I can't wait for the tiramisu filing recipe! I'm gf also. I would love to buy your book. I'm wondering how much of the book ihas gf options??
Thank you! ❤

Ania:
REPLY
Thanks, I'm glad to hear that! I hope you'll give it a go. Unfortunately, I have not published a book just yet, but thank you for your interest. x Ania

Lou:
REPLY
I’m so so excited to see this recipe! I’ve scoured the Internet to find a recipe for actual vegan ladyfingers for tiramisu and have only seen cake and the like being used. Can’t wait until the full tiramisu recipe comes out!

Ania:
REPLY
Thank you, Lou! I'm happy to hear that and watch this space - tiramisu cream is under way ;) x Ania