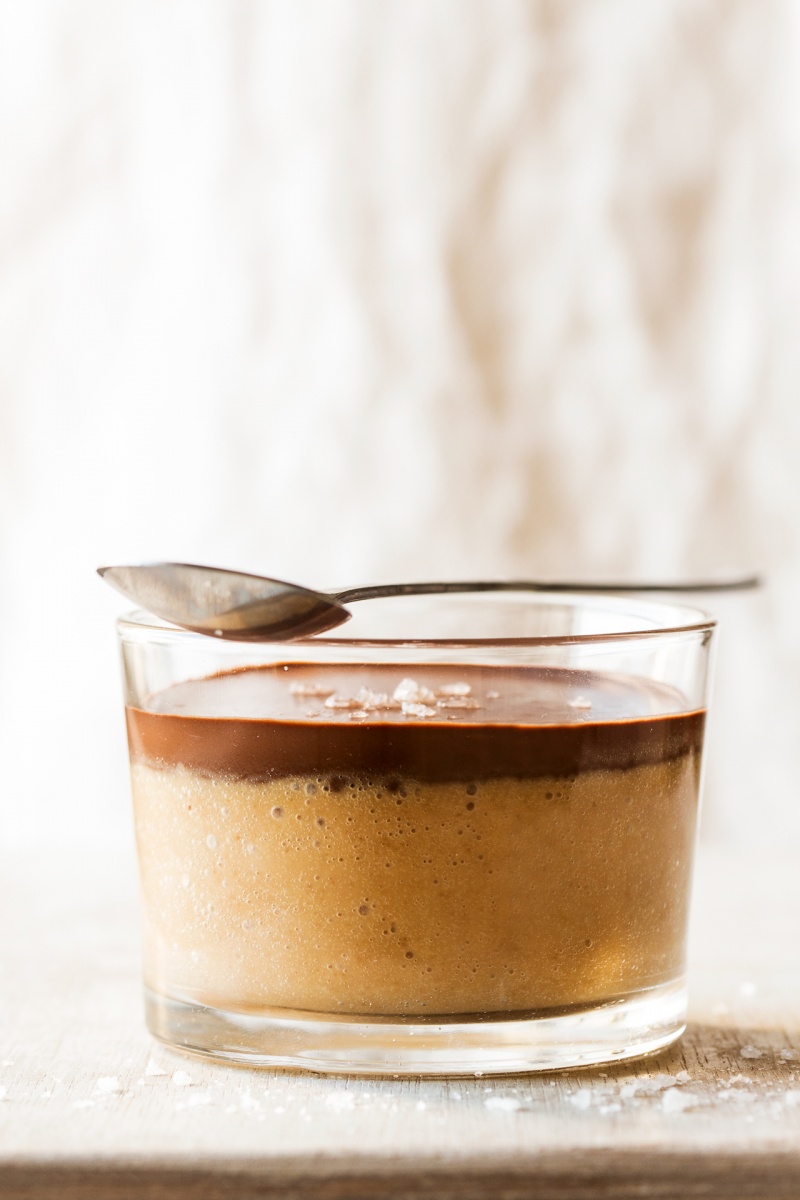 Man, it was so haaaaard to keep this recipe under wraps! It took a lot of tries to get this puppy just so and once I finally succeeded, I was so excited I wanted to share!! Duncan says I’m like an excitable little bird sometimes, especially when it comes to food discoveries. I’m declining to comment… 😉

So this indecently fluffy peanut butter mousse with creamy chocolate ganache on top was destined to be published later in the year, but there was no way I was gonna wait that long!

It owes its fluffiness to my favourite vegan egg replacer – the magical chickpea brine, also known as aquafaba. Now that I’ve done two successful chocolate mousse recipes with it (healthy and less healthy version), I have decided to be more daring when it comes to the flavour profile and see if I can marry it up with peanut butter, which I am obsessed with lately, BTW. I had my work cut out and many failed attempts under my belt, but the end result was well worth the effort, in my opinion!

This dessert was, in part, inspired by GU pots, which I used to console myself with when living in London and doing a job I didn’t get on with. Yes, I know that ingesting sinful chocolate desserts on a regular basis wasn’t going to help my job situation, but it sort of made sense at the time… And just like GU pots, this may seem like a small dessert but don’t be fooled, it’s pretty rich so a little goes a long way.

The peanut butter layer is peanutty, fluffy and sweet. The ganache that sits on top is creamy and not very sweet (although it does depend on the chocolate brand you use, the Greek brand I use isn’t that sweet), which contrasts nicely with the peanut butter mousse below. And a delicate sprinkling of salt on top complements both very well and adds yet another flavour dimension.

If you don’t want to use a chocolate bar, you can also make a ganache from raw cacao powder and coconut oil and sweeten it to taste. I recommend leaving it fairy savoury. Whatever you do, just make this mousse!

PS: If you make my vegan peanut butter mousse, don’t forget to tag me on Instagram as @lazycatkitchen and use the #lazycatkitchen hashtag. I love seeing your takes on my recipes! 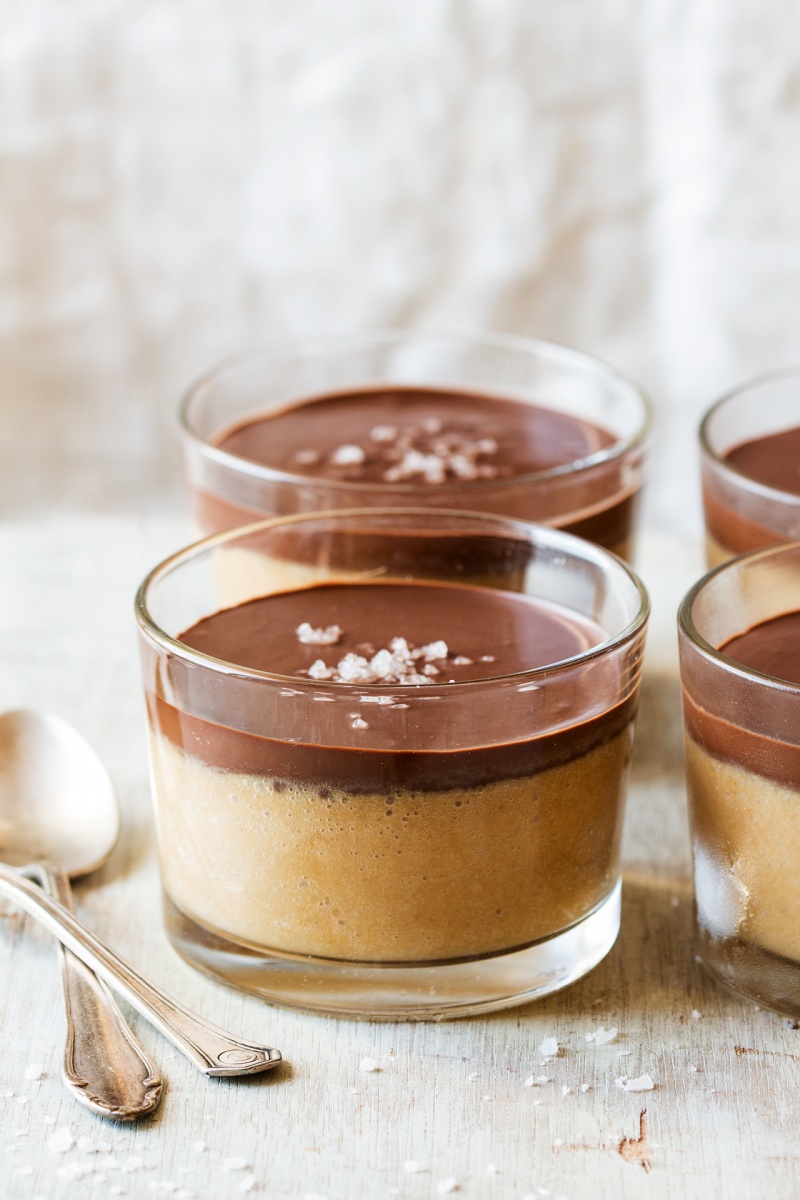 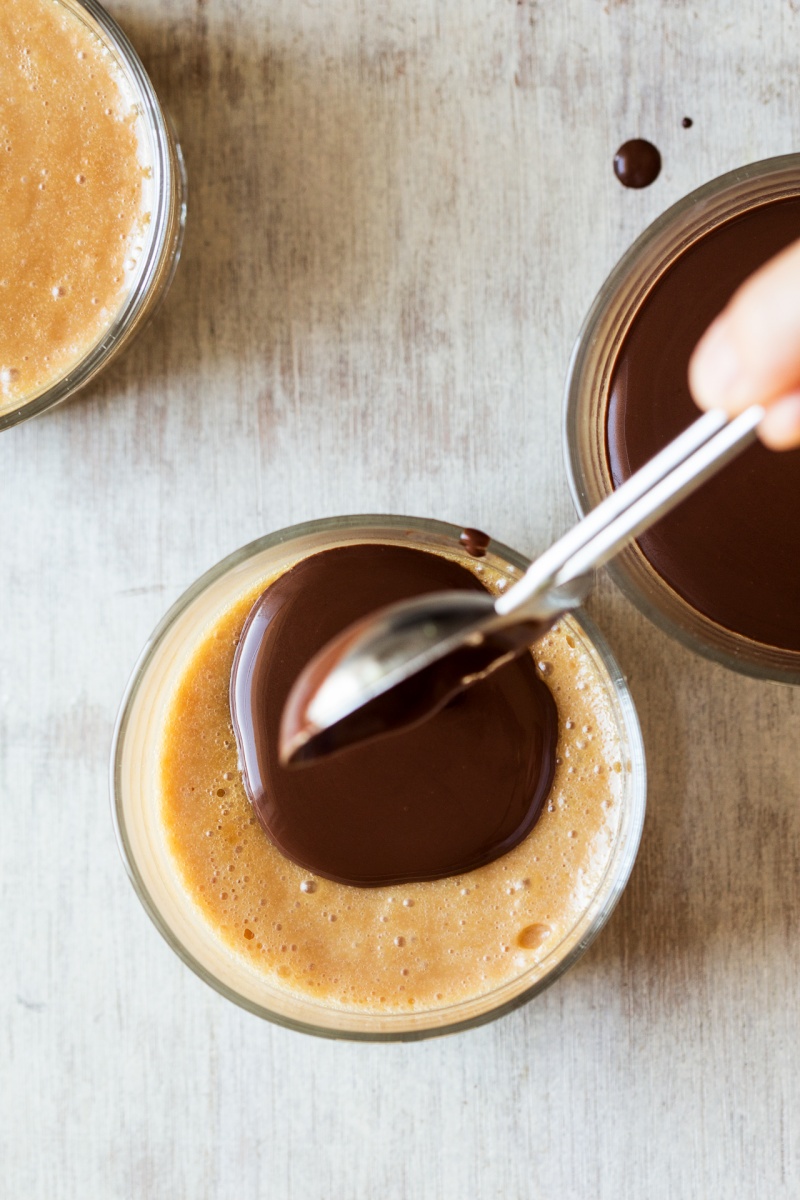 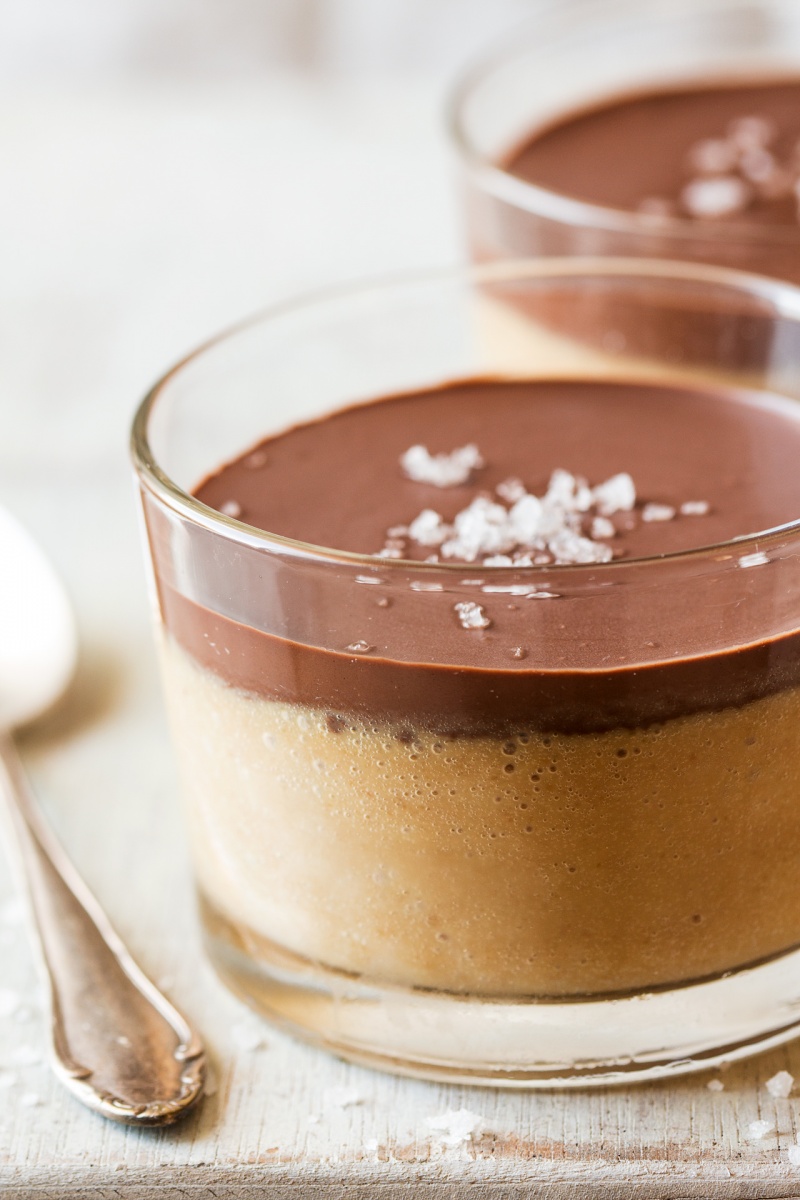 *I used unsweetened peanut butter for this (I used the Sun-Pat no added sugar). You could also use a homemade one although the mousse may be less smooth as there are always tiny particles of peanuts left in it.

**Please do not skip this ingredient. I have tried making this dessert without it twice but the peanut butter mixture seized (became grainy and oily) once added to the aquafaba. I have also tried with various amounts (2-4 tbsp) of almond milk, but I found that it tends to produce a mousse that has a bit of water at the bottom of the jar. I feel that this extra fat (found in coconut cream) is needed to render the mousse stable.

***The exact amount of plant milk depends on the particular chocolate brand you are using even if the amount of cacao solids is the same (I always use 70%). When I made this ganache with a Greek brand of dark chocolate, I’ve had to add 150 ml (½ cup + 2 tbsp) of almond milk to achieve correct consistecy. Now that I live in the UK, I have tried two UK brands and both off them produced too soft result so I adjusted the amount of plant milk to 100 ml (¼ cup + 3 tbsp), but please be aware that for some brands that may not be enough – I recommend testing the ganache prior to making this dessert for a special occasion.

Hi, I'm Ania. I love good food but I love animals more! Adopting a plant-based diet has been the best decision I've made and that's how this blog was born. It's a space where I want to show you that creating delicious plant-based food isn't actually hard at all.
END_OF_DOCUMENT_TOKEN_TO_BE_REPLACED