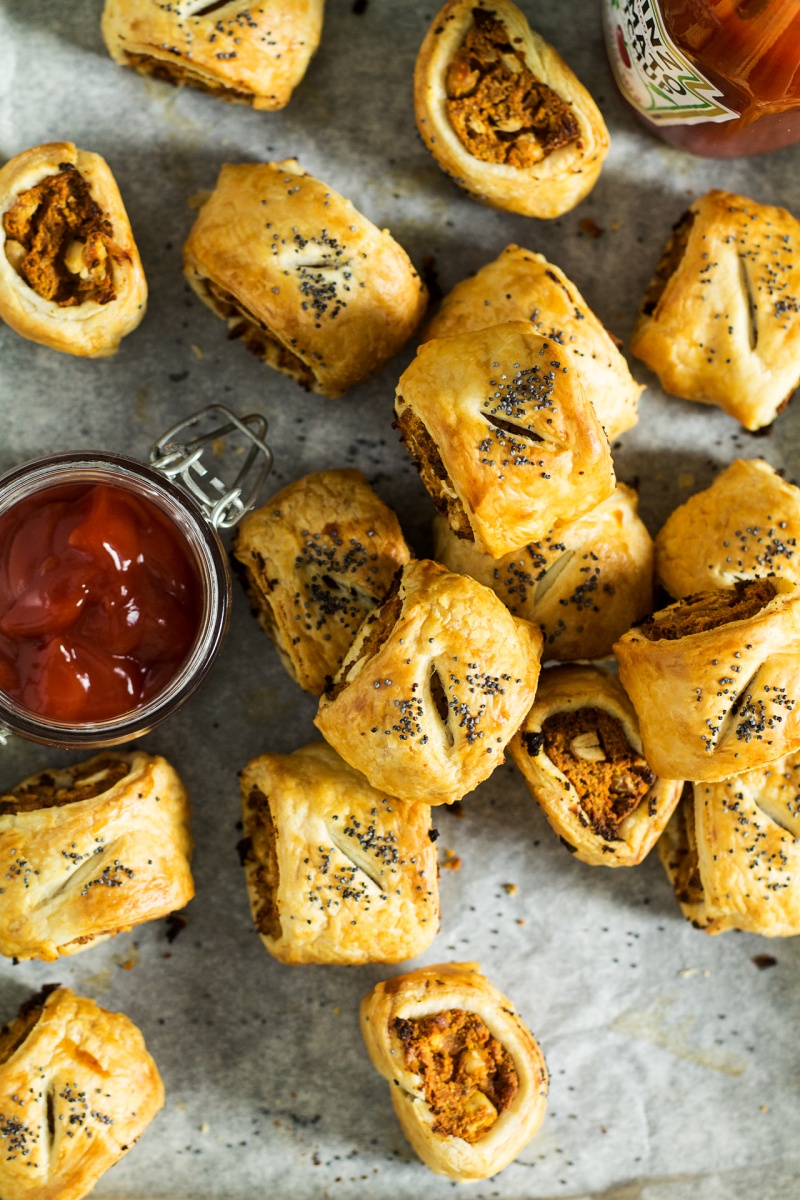 How are you guys doing post Xmas overindulgence? Have you vowed not to eat anything ever again? Have you started a new health kick yet or are you waiting for New Year’s Eve to roll around first 😉 ?

That’s exactly my plan, although I have started running again (after a break of almost a year) to offset one too many of Duncan’s delicious sticky toffee puddings with vegan ice-cream 😉 . I’ve only done 3 short runs so far, but I was dreading them (returning to running after such a long break is never easy for me) so I am happy they are done and dusted. They weren’t too bad actually. I’m planning to stick to 4 km for another two sessions and then add another 1 km loop next week. Hopefully, I will be able to run 8 km again in a few weeks.

So while I have started a bit of cardio again, I am still stuffing my face until after New Year’s Eve. I have a friend visiting us for a few days and I figured she won’t be that impressed if I serve a plate of veggie crudities for New Year’s Eve. I am planning to make lots of not-so-healthy nibbles including these vegan sausage rolls.

They may be small in stature but they are big on flavour. As I used to be a fan of the Spanish sausage ‘chorizo’, I flavoured my homemade ‘sausage meat’ with chorizo spices and I’m really pleased with how they turned out.

They also got a big thumbs up from Duncan (no surprises there) and his vegan-curious cousin – Sydney – who has kindly volunteered to taste test them for us! As they make perfect New Year’s Eve finger food, I hope the recipe will come in handy and you and your New Year’s Eve party guests will enjoy them as much as we did. Happy New Year, guys! 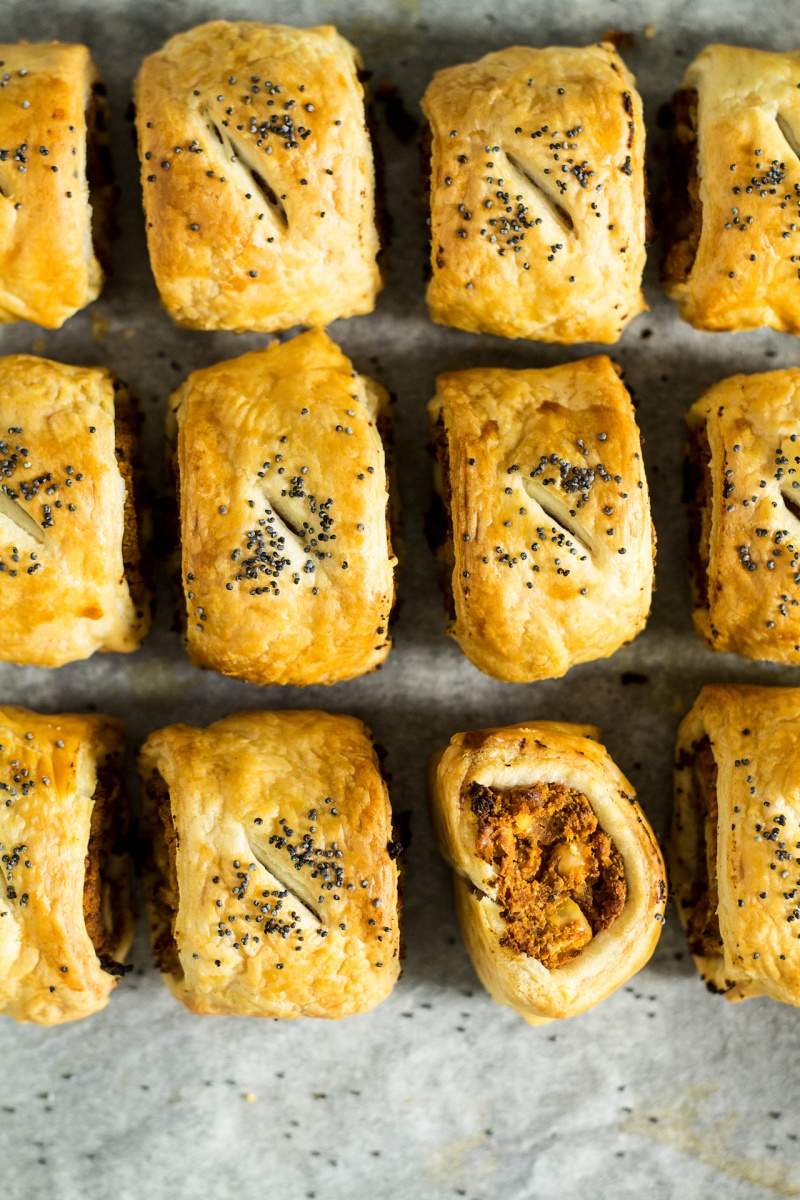 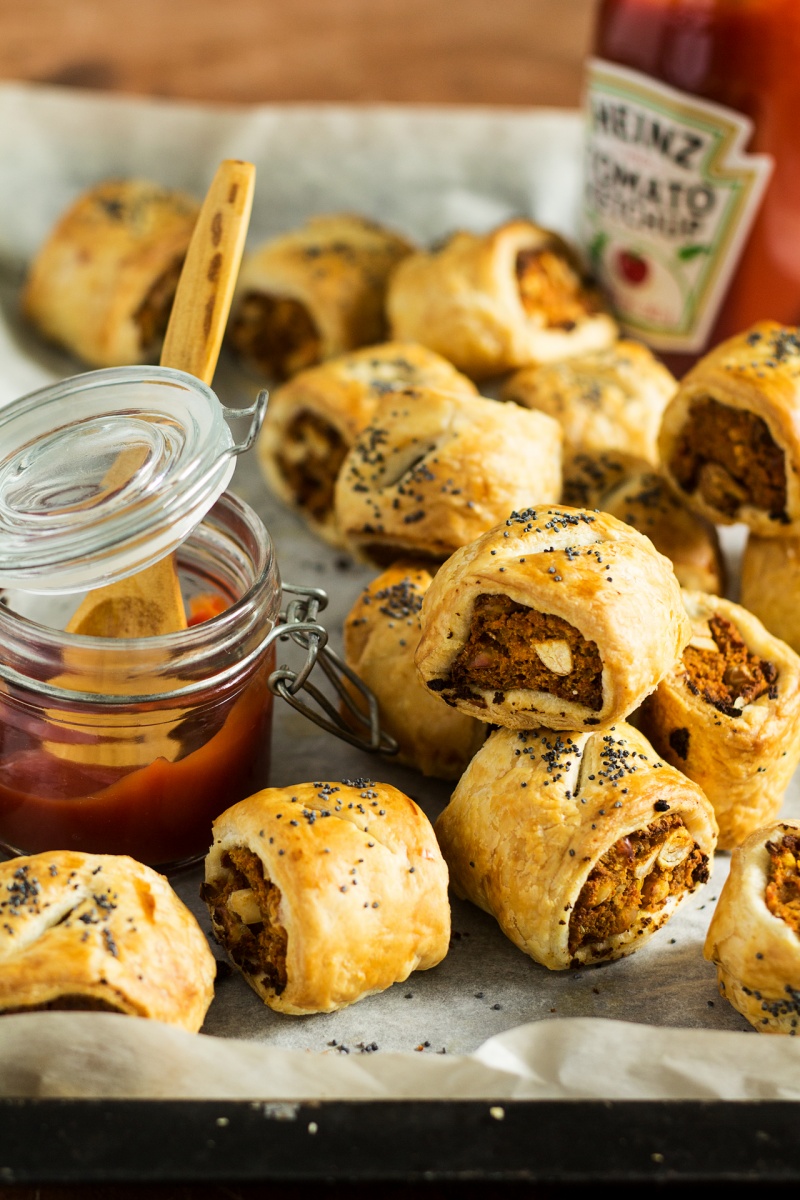 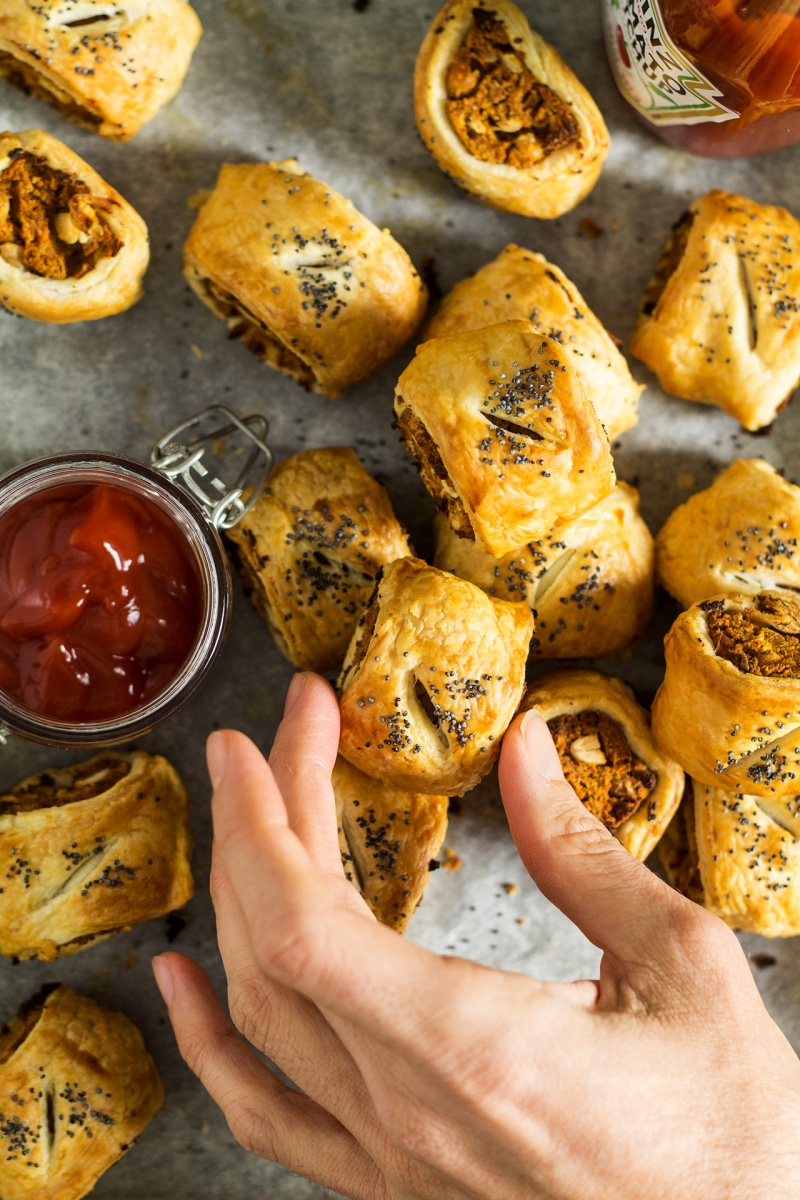 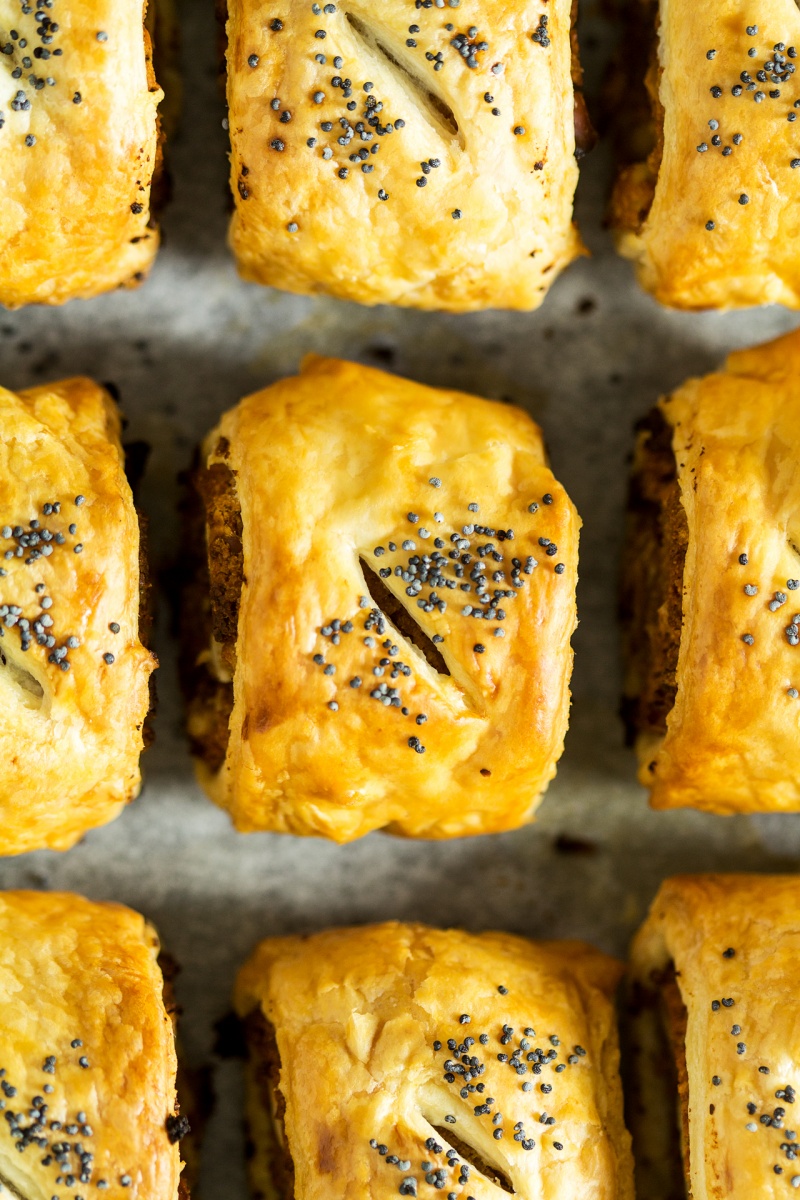 **I know that Jus-Rol and Pepperidge Farm are definitely vegan and that Dufour definitely isn’t. If in doubt, check the packet for more details. Jus-Roll also has a vegan and gluten-free puff pastry. 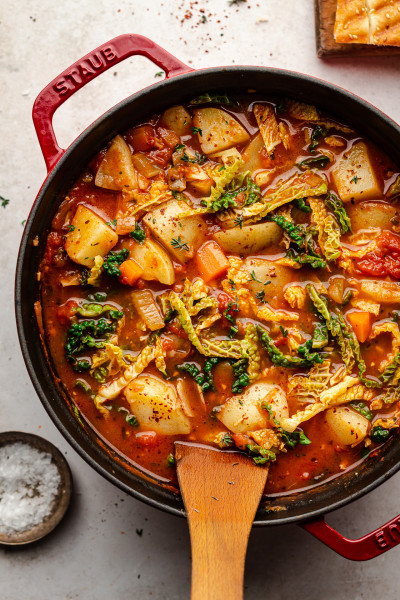 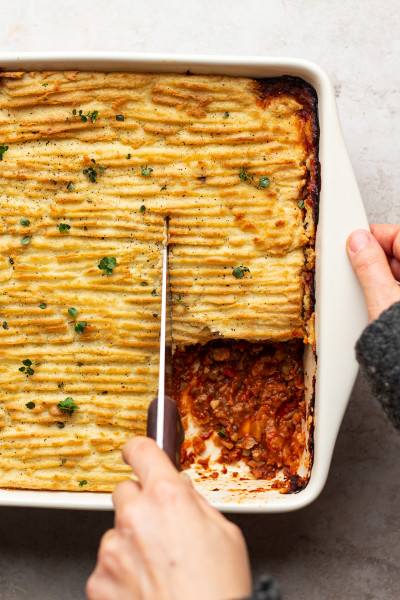 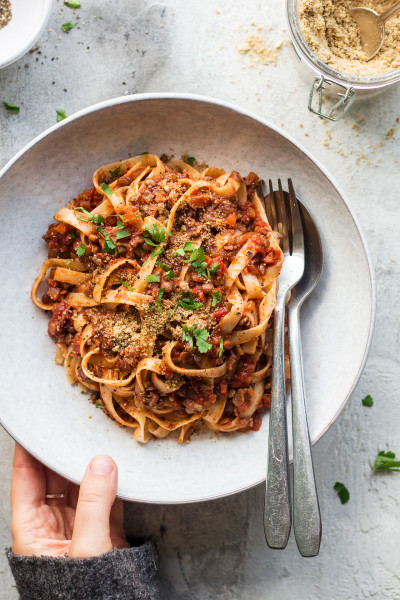 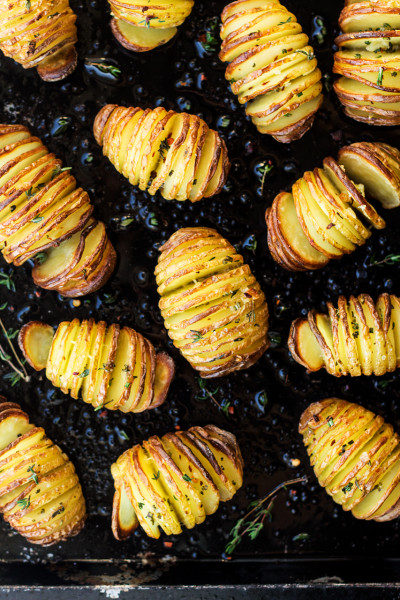 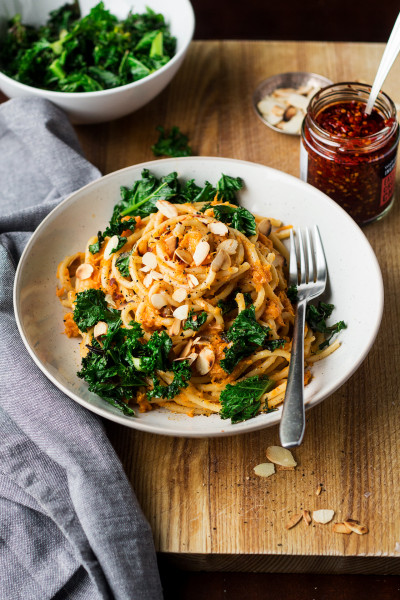 Ania:
REPLY
Thanks Emily, I'm delighted to hear that you enjoy these and if you fancy it, here is my new recipe for these that is even better, IMO. x Ania

Deborah:
REPLY
I'm wondering if it is really necessary to cook the sausages on their own before constructing the rolls. There's nothing raw in them that needs baking, and I don't think they need baking in shape when you could push the mash into a sausage shape before rolling. What do you think? It would save a fair bit of time. I haven't dried them yet but I'm thinking that I will for some vegan visitors next week.

Ania:
REPLY
Hi Deborah,
You may be okay, just not sure about the filling's texture and consistency if you skip it. I generally did that to get rid of excess moisture. Perhaps you'd rather try, this newer recipe, which is simpler. I'm sure your visitors will appreciate the effort you are putting in to accommodate them and I hope they will enjoy these. Ania

Veera joro:
REPLY
Hi! I love this recipe and would love to make these for Christmas! I was wondering if it was possible to freeze the 'sausage ' mixture (before baking it) and then defrosting it and cooking them on the day? Thanks for the recipe ☺️

Ania:
REPLY
I'm delighted to hear that, of course! Absolutely, I don't see why not. One thing to bear in mind is that freezing dulls the flavours so perhaps you may need to season a little again once thawed. Hope this helps! Ania

Elise Morris:
REPLY
I made these today for lunch and they are delicious. Took longer than I thought to make yet definitely worth it! Thanks so much for a great recipe.

Ania:
REPLY
My pleasure, I am delighted you enjoyed them so much, Elise! Ania

Charlie:
REPLY
Why still call it a vegan sausage roll? From what I've read it sounds more like a potato with beans , tofu, and sweet potato, why don't they name it something else it's clearly not sausage so why use the same name for something vegans don't want to eat !

Ania:
REPLY
Because that's what people search for and I obviously want my recipe to be found! Also, most vegans do not have anything against the taste of meat - they take a stand against the animal cruelty involved. I hope that makes more sense to you now. Cheers!

Ania:
REPLY
Aw, thank you - I am so glad that my recipe came in handy! All the best for your vegan journey! x Ania

Ellie:
REPLY
Hi there,
Could these be frozen? My daughter really misses sausage rolls which she used to have in her lunch regularly before discovering she was gluten intolerant. I'm very short on time so need something I can make a batch of and give her a couple at a time in lunches over the course of a couple of weeks or so.
Cheers,
Ellie

Ania:
REPLY
Hi Ellie,
I haven't tried freezing them, but I don't see why they wouldn't freeze well though. Ania

Barbara:
REPLY
Hi, I was wondering if I can make these rolls in advance? A day or a couple of hours maybe?

Ania:
REPLY
Hi Barbara,
Sure! They are tastiest on the day, so a few hours in advance should be absolutely fine.
Ania

Carrie:
REPLY
Hi, would tempeh work instead of tofu?

Ania:
REPLY
Hi Carrie, yes, I think (I haven't tried it myself) it should work too! Ania

Jen:
REPLY
I made these yesterday for NYE family gathering - the vegans didn't turn up so the meat eaters tried some and they were a huge success! Will definitely make them again but they are quite time consuming so I'm not sure I'll be making them just for me!
Thanks for a tasty recipe that satisfied all! :-)

Ania:
REPLY
Thanks, Jen! I'm really pleased that they were so popular! Happy New Year! Ania

Molly:
REPLY
These are going on the New Year’s Eve appetizer table. They sound so good!

Ania:
REPLY
Aw, thanks, Molly! I hope they will go down well! Happy New Year! Ania