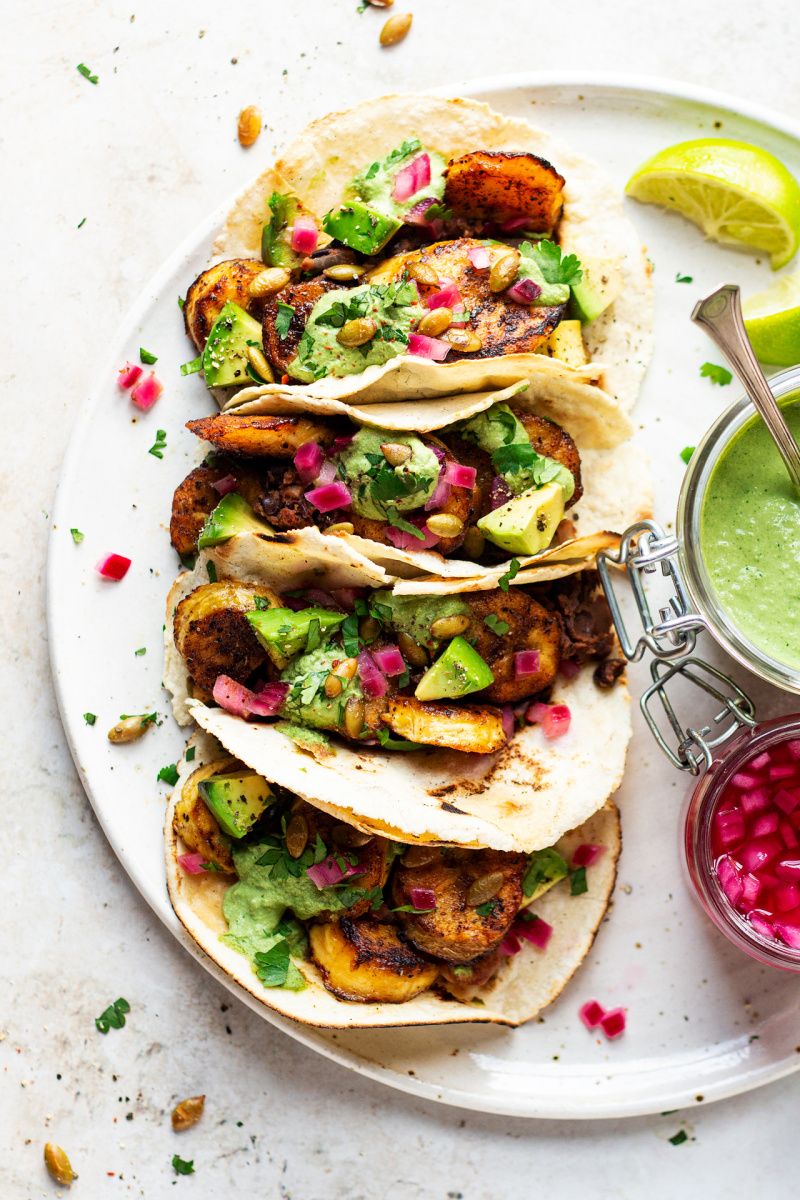 Encouraged by the last weekend’s sun, I decided that it’s time for some vibrant vegan tacos this weekend – quintessentially summery food IMO – and as luck would have it, the sunshine gave way to ominous grey clouds threatening heavy rain. Oh well. Still, tacos are filling and refreshing at the same time and I enjoy tucking into them whatever the weather.

As it’s pretty difficult to get quality corn tortillas here in the UK, I’ve decided to bite the bullet and purchase my very own tortilla press and it’s the best thing ever. It speeds up the process of making taco shells immensely. It took me a few goes to get the knack of making each and every tortilla puff on a hot pan, but the last batch was spot on so I am getting there, I feel. If you enjoy tacos and want to know what’s in your dough, I highly recommend getting your own press. Personally, it’s been a life changer!

In terms of fillings, I’ve been wanting to try cooking with plantain – banana’s more starchy cousin – for a while and I’ve decided that putting it in tacos will certainly be a good way to use it. I cut it into slices, coated in a Mexican spice mix and fried in a small amount of oil. It’s mildly sweet flavour typically benefits from a squeeze of lime juice, but instead I’ve decided to deliver a pop of sour taste by adding a sprinkling of quick-pickled onions and a dollop of tangy coriander crema. I have also included lime flavoured refried beans, which you are welcome to skip, but they do make the dish more substantial, are super easy and quick to make and provide additional nutrition.

I went out for tacos last weekend with some friends and while the taco shells themselves were expertly made, the vegan range of fillings was highly unimaginative and I was disappointed. I also felt a bit robbed too, tbh (paying an average of £3 for a tiny taco)! I find that this often happens when meat-forward places offer vegan options. They tend to think that any vegetable substitute will do, the pairings are often lacklustre and there is often a stark lack of contrast of flavours and textures that is so needed, and especially key in vegan cooking. I mean a taco smeared with a chunky pea dip and topped with spring onions and coriander is just not really that exciting, is it? It’s the kind of topping that belongs on a bruschetta in my opinion, where the crustiness of the bread offers much needed textural relief. Oh well, you win some and you lose some, but you always come away with some thoughts and inspiration, so it’s all good. 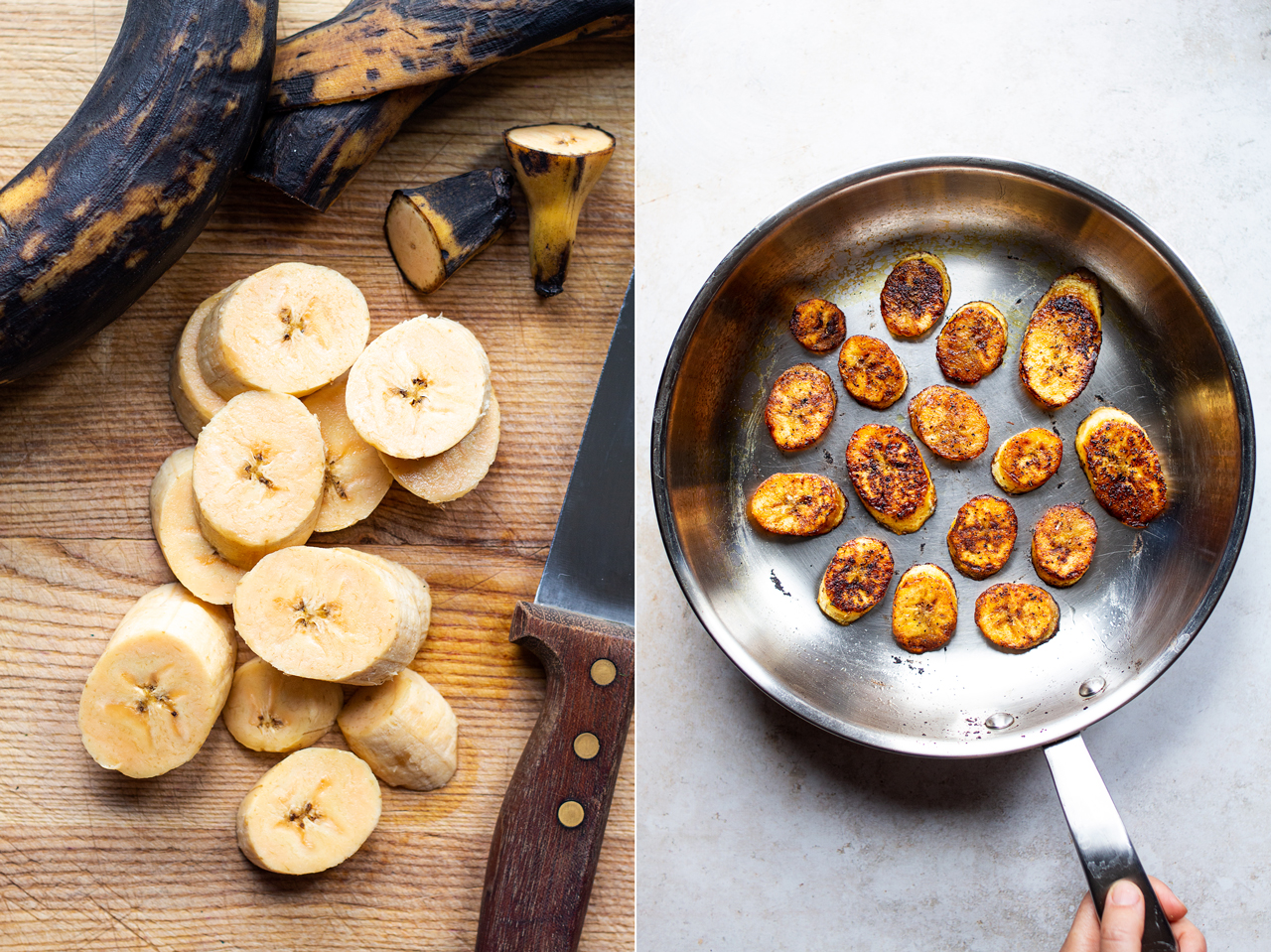 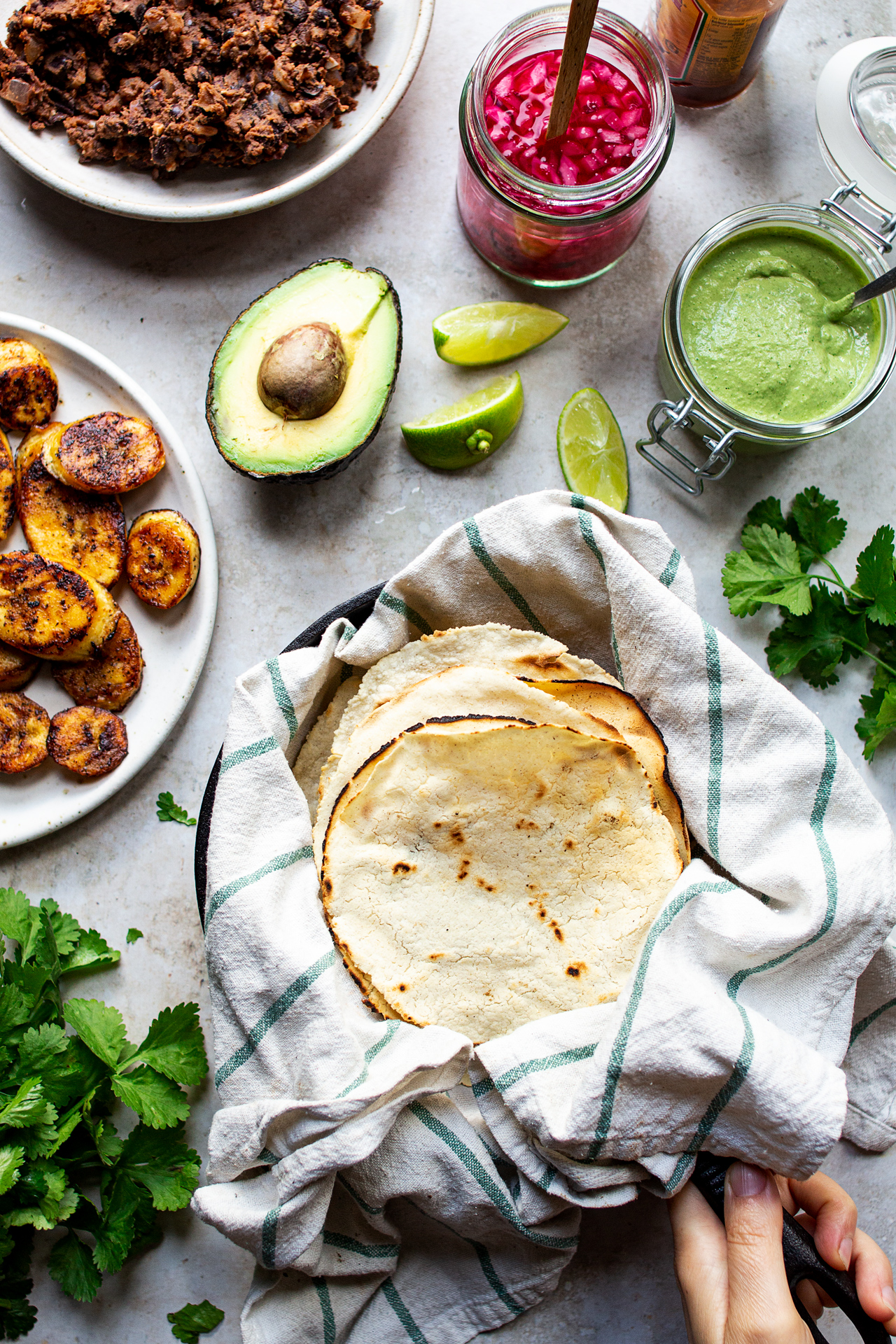 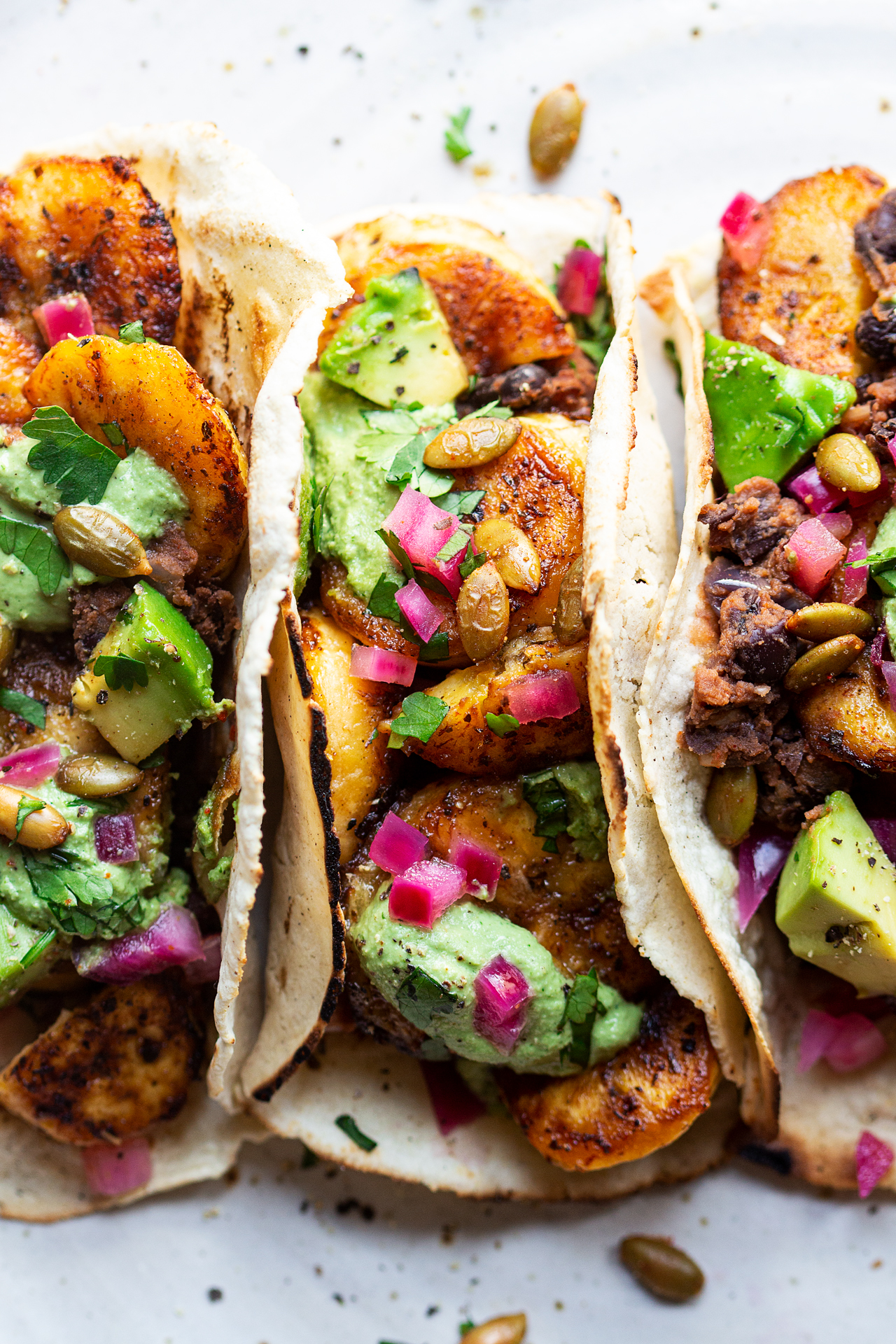 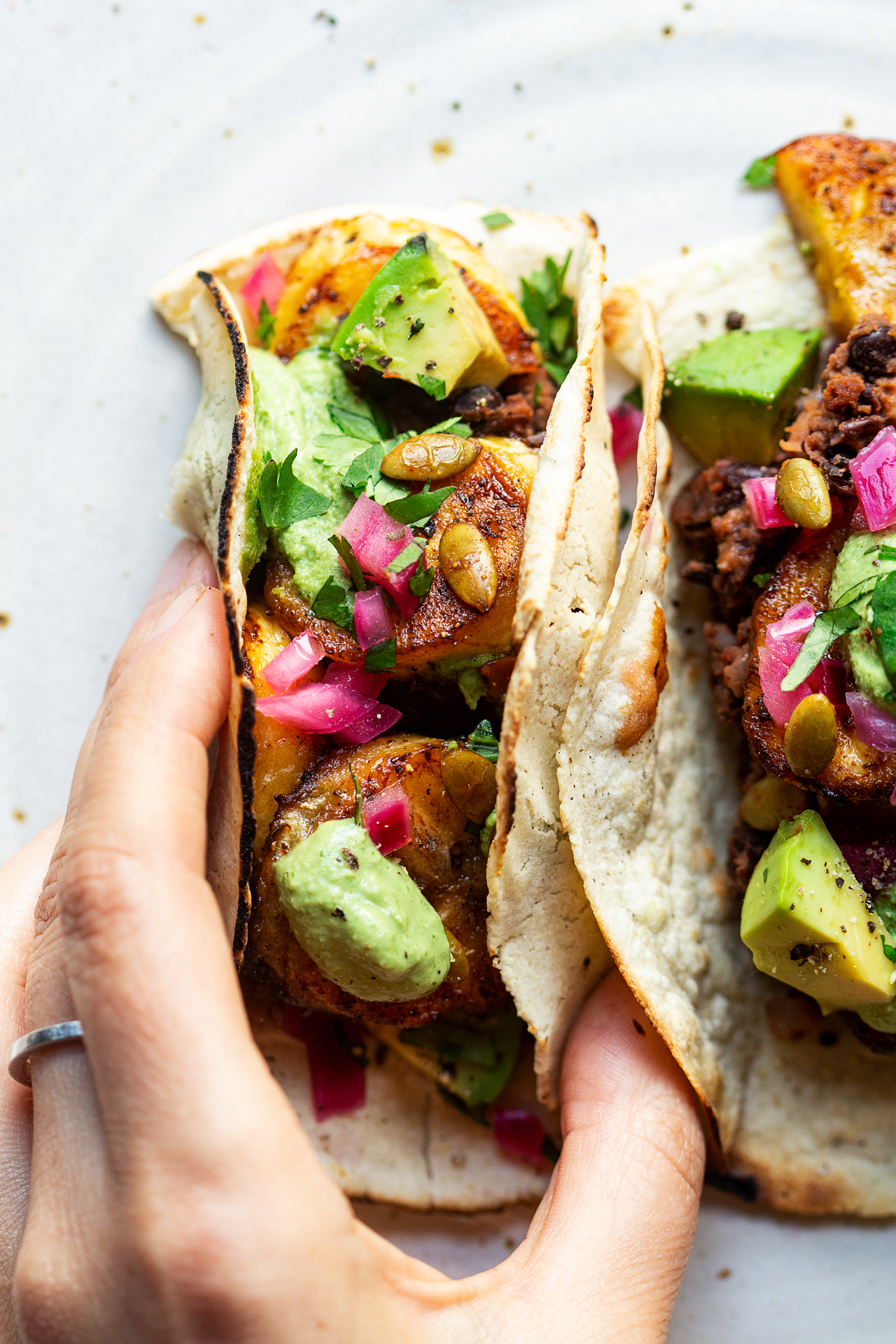 METHOD
REFRIED BLACK BEANS (make a day ahead if possible)

NOTES
This is the type of tortilla press that I use and can recommend.