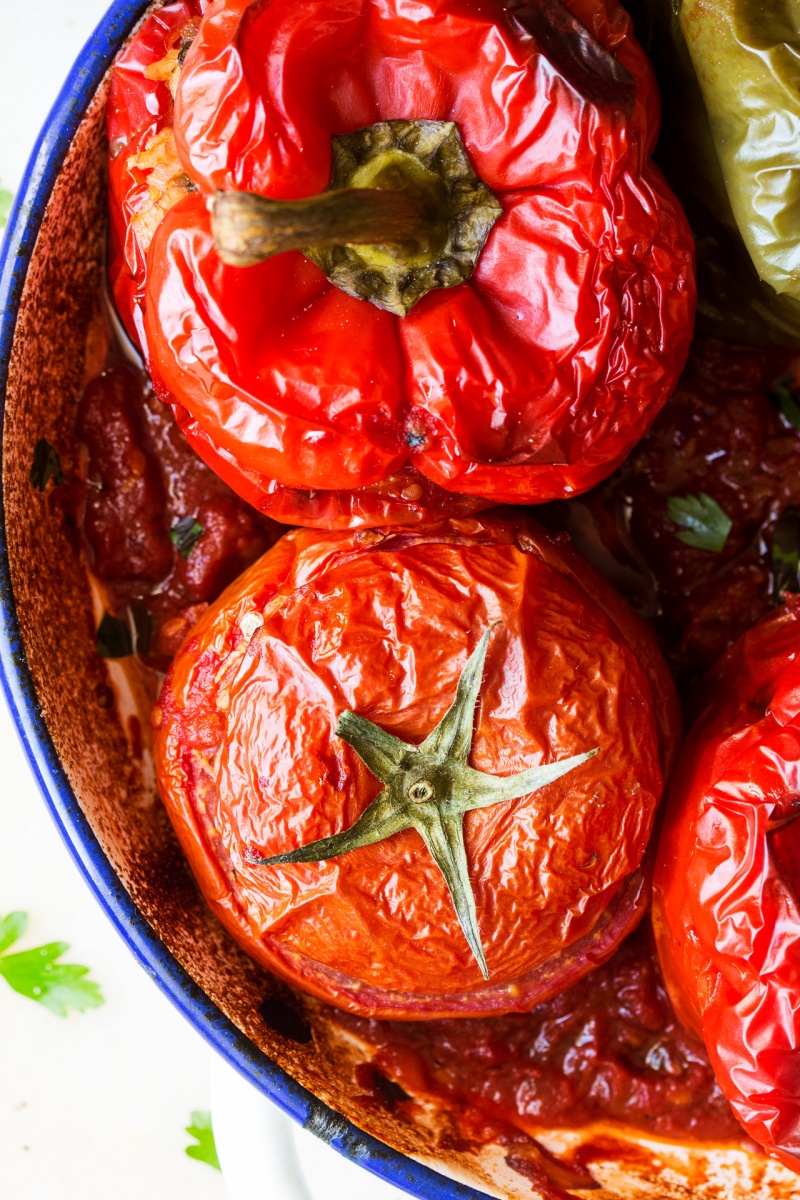 Preparing stuffed vegetables has a long tradition in almost all of the Mediterranean countries. If you’ve ever been to Greece, I’m sure the Greeks did not let you leave without trying yemista or dolmades first 😉 . They are hospitable like that! Yemista (pronounced ‘gemista’) is a classic dish of summer vegetables stuffed with rice. Tomatoes and peppers are probably the most popular and while this dish is often vegetarian, it’s rarely vegan as there is kefalograviera cheese in the filling.

That’s why I make my own yemista, which is a lot of fun and not that difficult at all. The rice does not require pre-cooking as it has plenty of time (and moisture) to get cooked through while yemista is in the oven, so it’s really a straightforward kind of dish.

At first glance, you may think that I have gone a bit crazy when it comes to seasonings, but trust me on this! While I love yemista, it does have a propensity for blandness and I have had way too many bland versions to be shy about salt, garlic, capers, sultanas, toasted almonds, herbs, chilli (which isn’t traditionally added, but I like a subtle kick) – all the things that impart flavour.

Apart from adding a touch of spice, I also made some other changes to the traditional vegetarian filling in order to compensate for the lack of cheese and to give it my twist, if you like. I used pan-toasted almonds (rather than pine nuts as they cost a small fortune) and a healthy dose of salty capers, which improve the flavour of almost every dish!

I also went a bit easy on the olive oil. A Greek yiayia (grandma) would typically use about 1-1½ cups of oil in a similar recipe. While I have nothing against olive oil, I feel that it should still be eaten in moderation. So I went for a meagre ¼ cup for the filling and ¼ cup for the sauce and I feel like that’s plenty. Feel free to override me, of course! And don’t tell any Greek yiayias as I have a feeling that I would get my wrists slapped 😉 .

This beautiful dish is one of those that tastes best the day after it has been made. It is eaten at room temperature (rather than steaming hot) and a glass of chilled white wine goes superbly well with it. Also, if you are feeling like some extra carbs, cut up some potatoes and place them in the sauce, they will give you more ‘carbage’ as Duncan calls it 😉 . 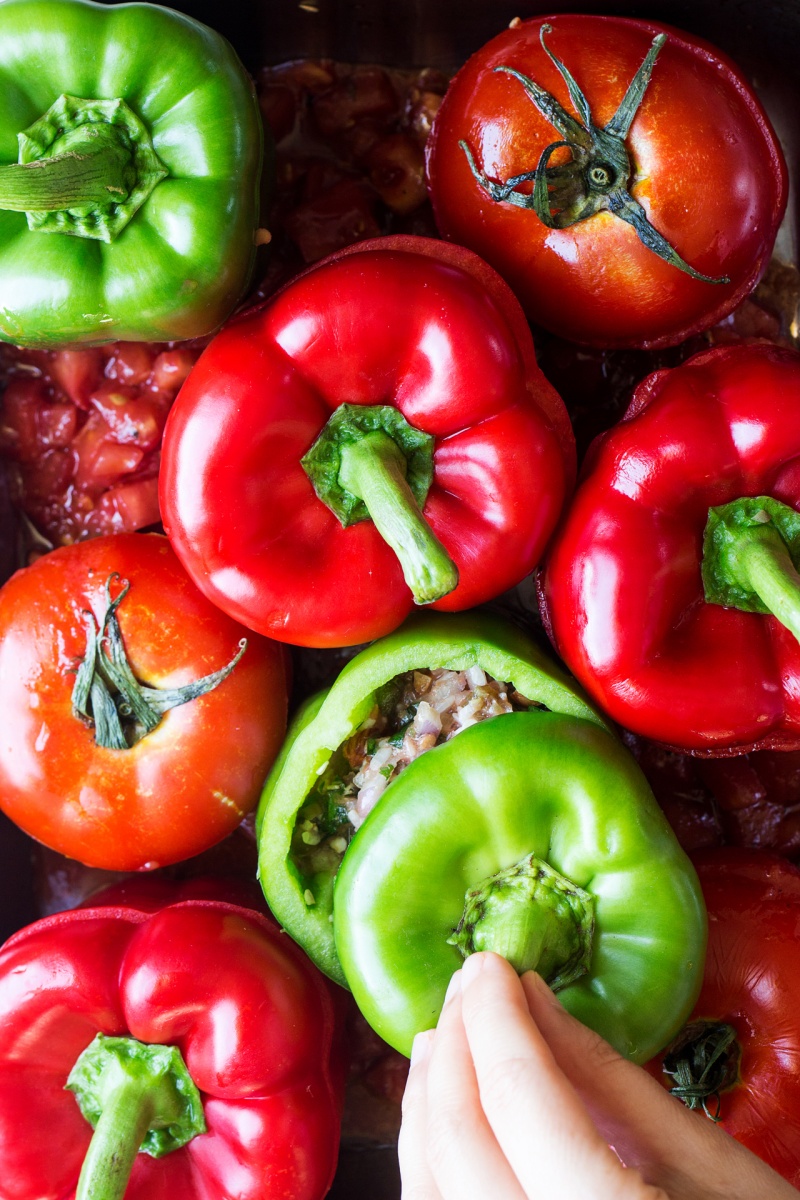 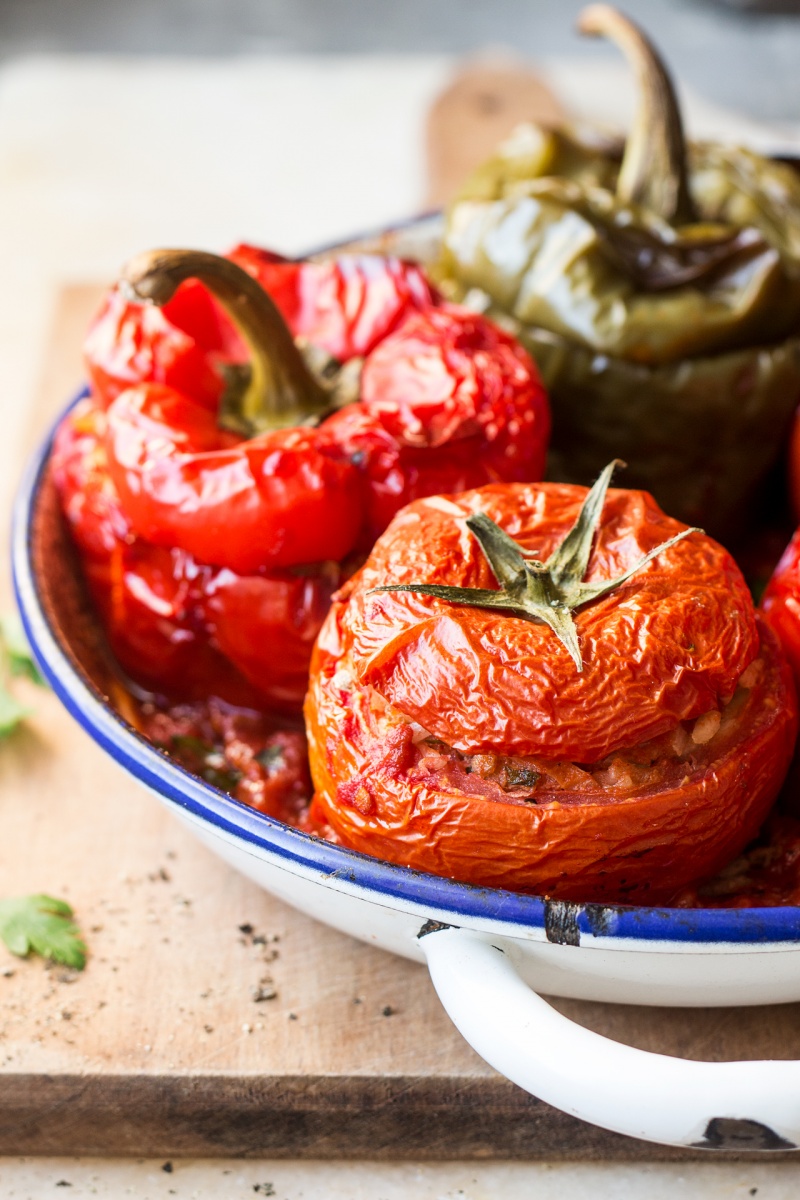 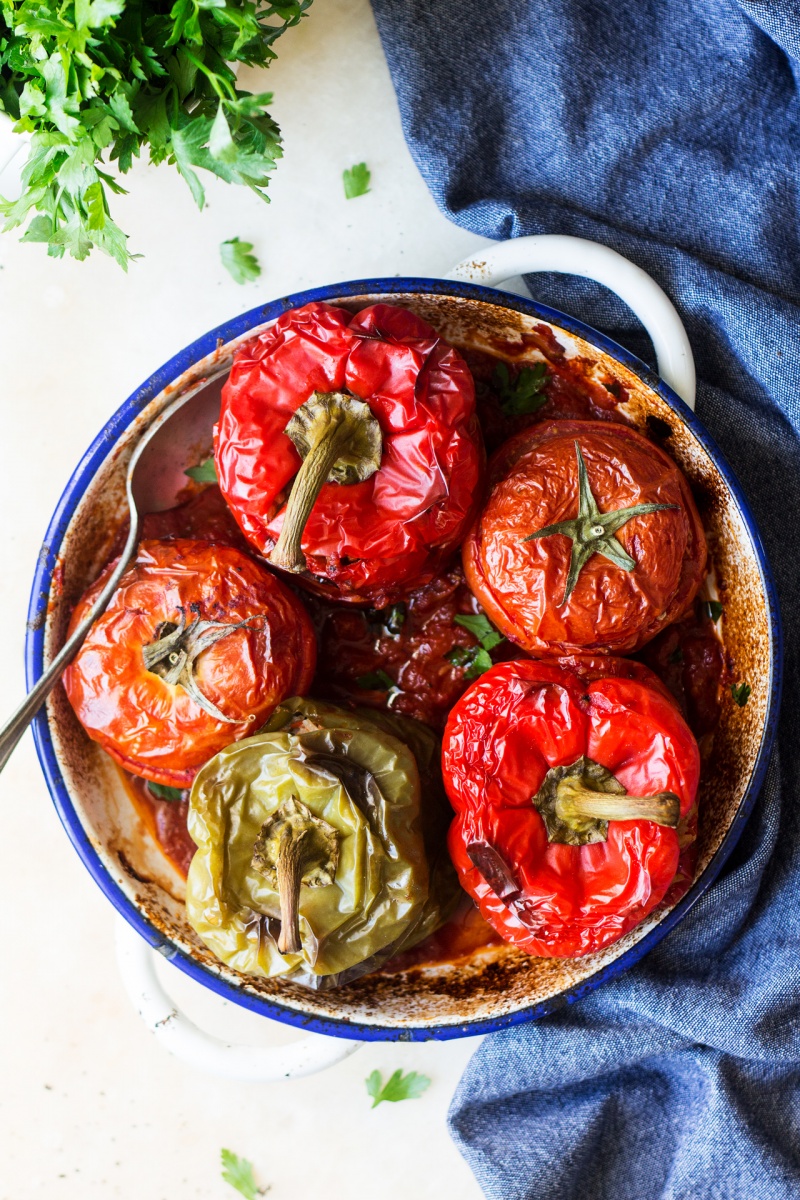 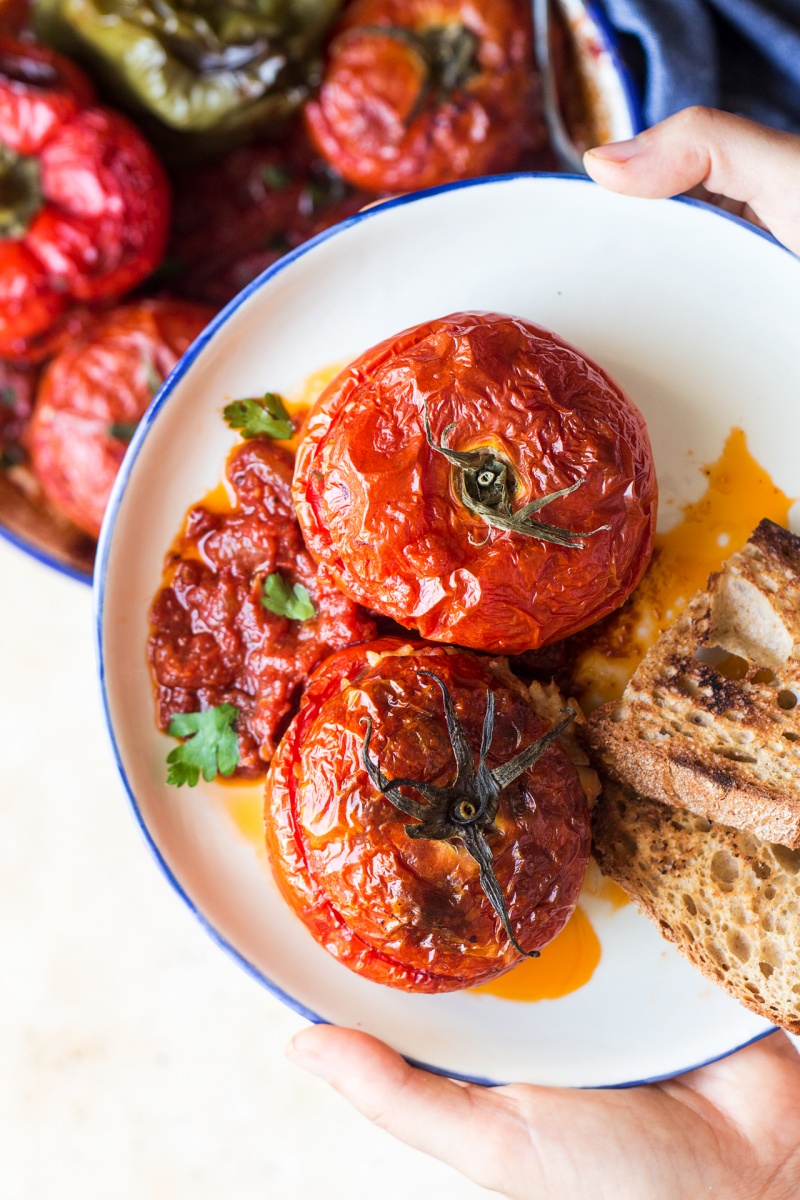 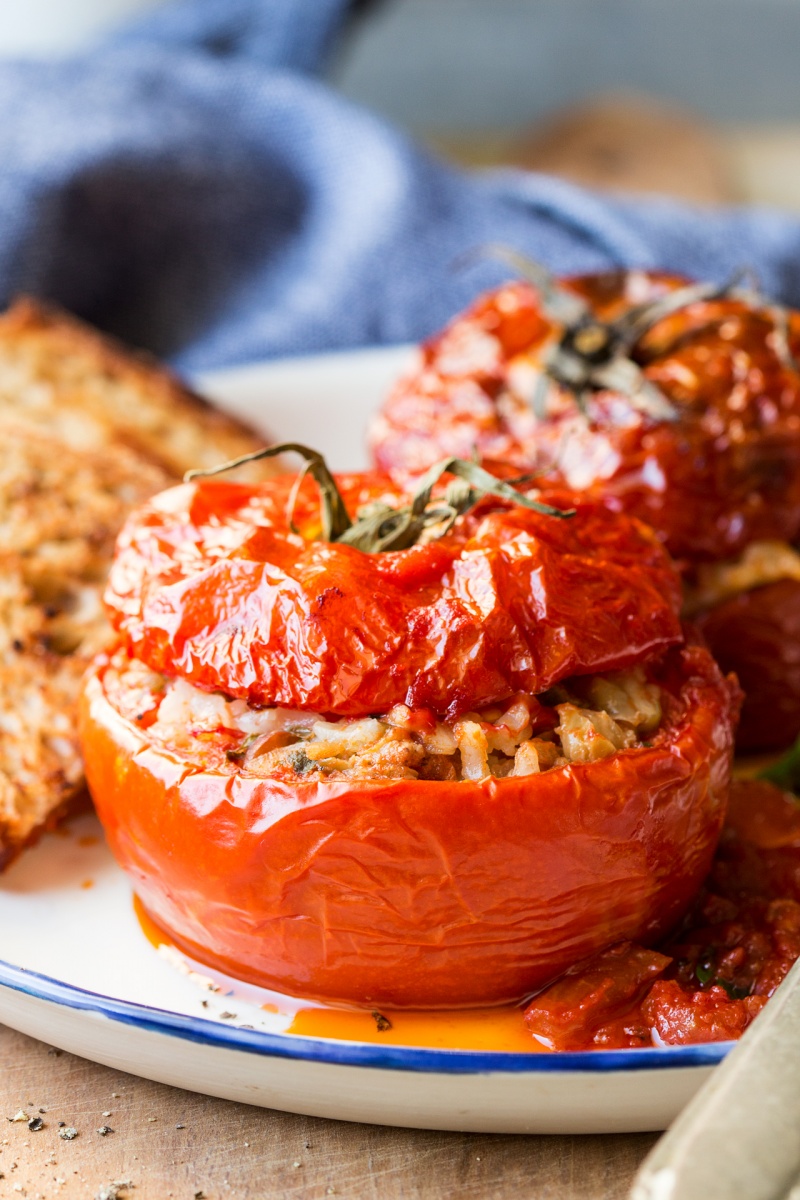 METHOD
NOTES
*I used Blue Rose rice – a variety of rice that is available in Greek shops that is specifically recommended for this dish. It’s a medium grain rice so feel free to substitute for another medium grain variety.